Mark Few wondered how his Gonzaga team would handle a unique defensive look from the Washington Huskies and their patented 2-3 zone.

A few first-half migraines later, the Bulldogs eventually put their coach at ease, settling in on offense to pull away for a 77-60 nonconference victory over the Huskies at McCarthey Athletic Center.

Friday’s result gave Gonzaga its seventh consecutive victory over Washington and extended the nation’s longest home winning streak to 70 games. The Bulldogs have won 14 of the past 15 games against the Huskies dating back to 1998.

Gonzaga’s offense was stifled early but never stumped by a scheme that had held eight of UW’s first nine opponents under 70 points – and all nine under the point total the Bulldogs manufactured on Friday.

The Bulldogs were frantic early, committing eight turnovers inside the first 8 minutes and opening 1 of 10 from the field. One phase of the game didn’t impact the other, though, and Gonzaga turned Washington over six times inside the first 10 minutes, with two steals coming from an unlikely source in All-American scoring machine Drew Timme, who’d eventually match his career high (four) in steals.

“I thought once we settled down against their zone and were able to get some shots on our terms,” Few said. “I thought all night we did a really good job of defending and that was a big key in the game.”

Washington opened on a 4-0 run, but Gonzaga followed with a 7-0 run. The Huskies responded with an 8-0 run, but the Bulldogs did them one better, unleashing a 9-0 run with two field goals from seldom-used reserve center Efton Reid, a 3-pointer from reserve guard Hunter Sallis and another 3 from Julian Strawther.

The Huskies tied it at 17, but the Zags didn’t cede control of the lead for the remainder of the game. They solved UW’s zone, making 13 of 18 field goals to close the first half while committing a single turnover through the final 11:54 of the half.

“That zone throws a lot of problems and it’s something you’re not used to seeing every night,” Strawther said. “So we’ve been prepping for it the last few days and we knew it was going to cause a little bit of problems. But we knew we just had to calm down, take a step back, make the simple play and find guys in their spots. We knew the shots would eventually fall….”

Coming off a 29-point, 17-rebound outing against Kent State, Timme transformed into a presence on both ends of the floor, scoring a game-high 22 points on 8-of-13 shooting while hauling down seven rebounds with four steals and four assists.

Timme didn’t make his first shot until there was 5:57 remaining in the first half, but the senior ultimately had his way with UW’s shorthanded frontcourt, which struggled to guard him straight up and often picked up fouls when trying a more physical approach. Timme went to the free-throw line 11 times – two more than UW did as a team.

“They’re just really good at jumping out in passing lanes, super anticipatory, the ‘easy one more’ isn’t there,” Strawther said. “You’ve kind of got to fake a pass to make a pass. Simple back to grade school. They’re just out in the lanes and try to muck everything up. I think we did a good job of finding Drew down low and that kind of got us going.”

On a night when Gonzaga struggled to consistently make 3s over UW’s zone, the Bulldogs evolved their offensive strategy, pounding the ball inside to score 44 paint points. Gonzaga made 64% of its shots inside the arc and dished out 19 assists.

Strawther was GU’s second-leading scorer, with 18 points on 7-of-14 shooting from the field, and also pulled down 12 rebounds. Rasir Bolton had a well-rounded stat line of eight points, six assists, four rebounds and three steals, Sallis had seven points off the bench to go with two blocked shots, and Anton Watson scored nine points with three steals.

Watson, a Gonzaga Prep product who grew up in Spokane, improved to 2-0 in his career against the Huskies after playing 8 minutes in GU’s 83-76 win in 2019.

“It feels good, it’s always competitive when we play them,” Watson said. “Last time we were at UW, it was one of the loudest atmospheres I’ve been in, so we brought it over here. Then the first time I’ve seen them play, it was when Rui (Hachimura) hit the game-winner.

“So every game we play against each other is super competitive and yeah, I’m happy we got the win.”

Timme helped the Zags contain UW’s season scoring leader, Keion Brooks Jr., primarily by luring him into early foul trouble. Brooks still finished with 14 points, but was scoreless at halftime, committed six turnovers and made five of his six shots inside the final 10 minutes of the second half, with Gonzaga’s lead up to 57-42.

The Huskies shot just 23 of 57 from the field, 7 of 26 from the 3-point line and turned it over 16 times. Gonzaga recorded 12 steals – the second-highest total of the season. 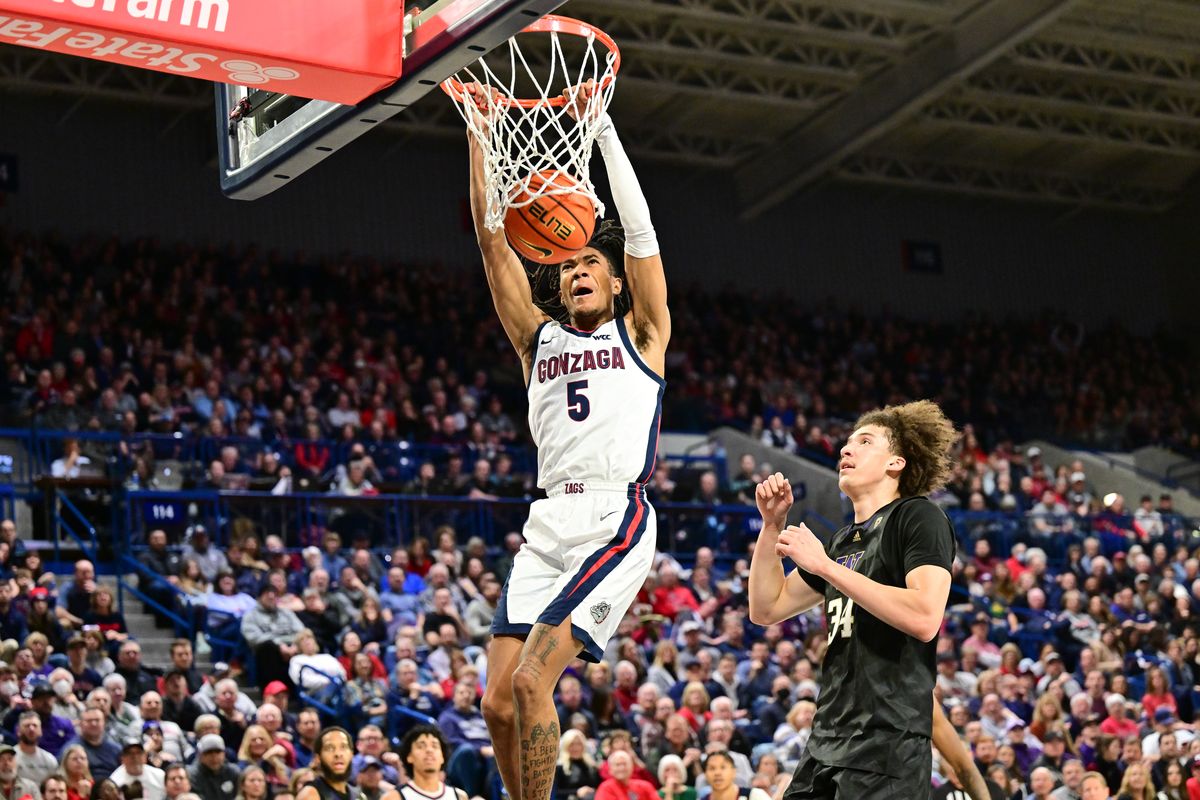