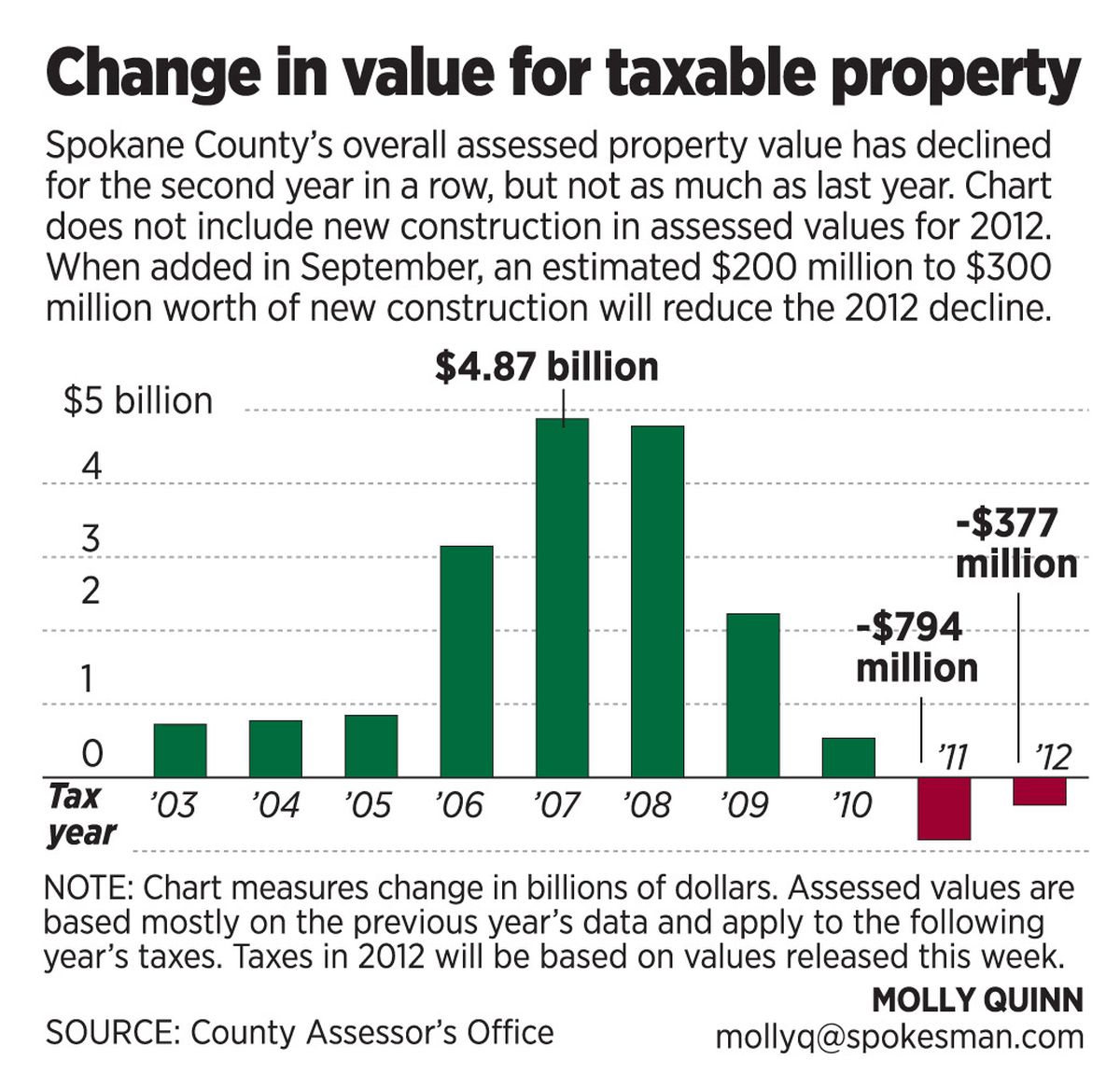 Property owners may still check their values on the assessor’s website and appeal their values by July 1, Assessor Vicki Horton said. She said the website – www.spokanecounty.org/ assessor – has detailed information on how to file an appeal.

The silver lining in newly released Spokane County property values is that they didn’t decline as much as last year’s.

The county’s overall assessed value fell for the second year in a row, but only about half as much as last year’s $794.9 million drop.

Assessor Vicki Horton said the picture will improve in September when new construction, estimated at $200 million to $300 million, is folded into the calculation.

“We’re not looking for a great deal of new construction this year,” Horton said.

In fact, Chief Deputy Assessor Byron Hodgson said the new construction is likely to be only about half to three-fourths of the $413 million added to the tax rolls last year.

Each year’s assessment is based mostly on the previous year’s data, and applies to the following year’s taxes. Assessed values released this week will apply to 2012 taxes.

As things stand, the county’s total assessed value is down about $377 million.

Even so, Hodgson said, “Our county is very much better off than some counties over on the West Side. They have had enormous drops in their aggregate assessed values.”

While Spokane County’s value has been relatively stable, around $38 billion, Snohomish County has lost about 20 percent of its value in the past several years, Hodgson said.

No postcard notices were mailed to owners of approximately 76,000 homes that didn’t change in value, a move that Horton said will save the county about $16,000.

Although everyone has received notices in recent years, that hasn’t always been the case, Horton said. State law requires notification only when there is a change.

Property owners may still check their values on the assessor’s website and appeal their values by July 1, Horton said. She said the website – www.spokanecounty.org/assessor – has detailed information on how to file an appeal.

“All of our help is free,” Horton said. “You don’t have to pay to have help with your appeals.”

She alluded to former Assessor Ralph Baker’s announcement this week that he has formed an organization, the American Property Tax Institute, and launched a website to sell booklets with information and advice on assessments.

Its Web address is www. AmericanPropertyTaxInstitute.com.