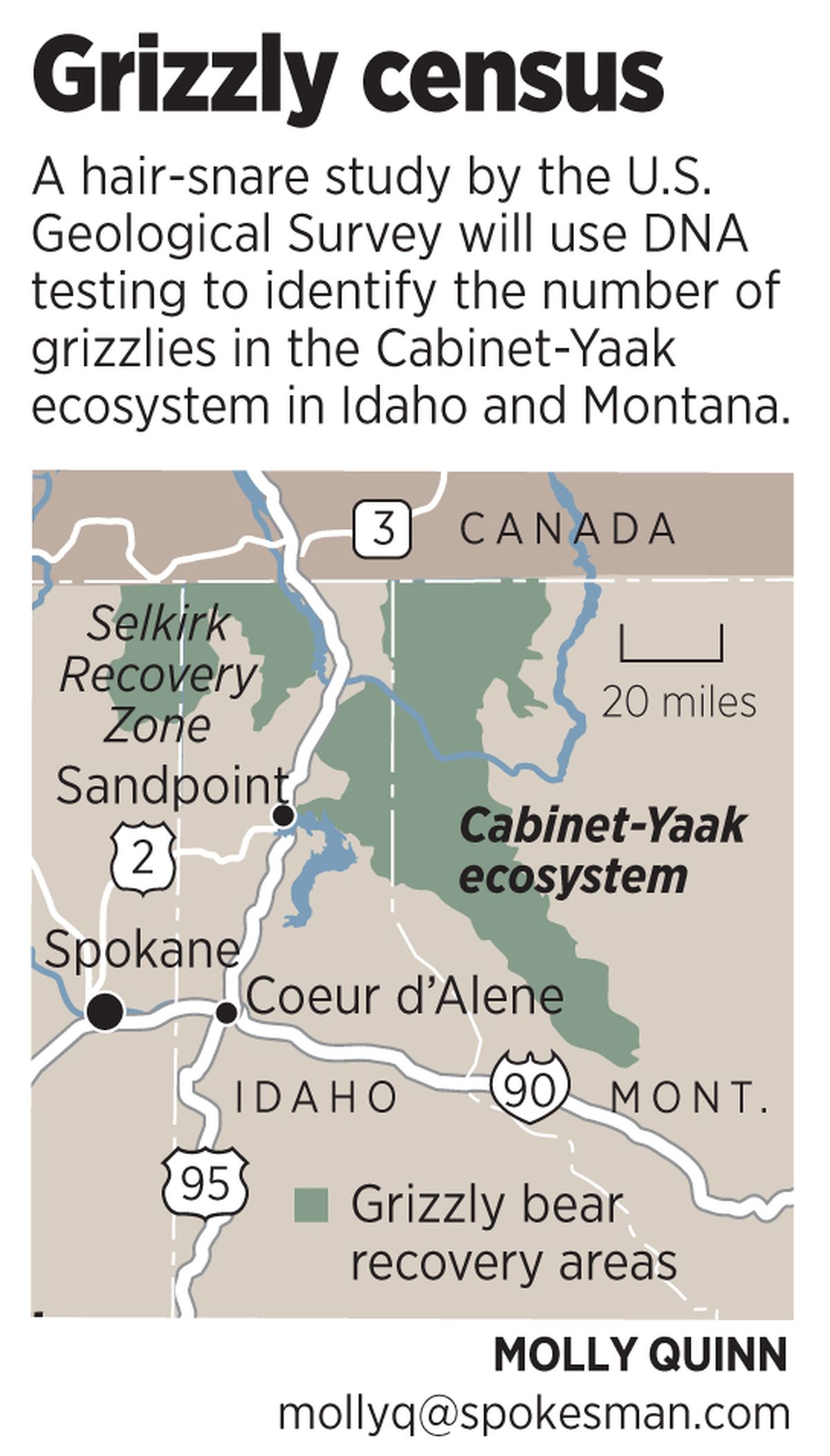 Watch videos of grizzlies and black bears at bear rub sites at http://tinyurl.com/4yevg7z

Next summer, grizzly bears will follow their noses to census sites.

Enticed by the smell of fermented cow blood and fish guts, they’ll crawl through corrals of barbed wire to sniff logs doused with the mixture. Unbeknownst to them, the big bruins will be leaving DNA samples behind.

Researchers will collect hair snared on the barbed wire. Through DNA testing, scientists will be able to identify individual grizzlies and determine their gender and blood lines. The three-year study will yield more precise estimates of the number of grizzlies in the Cabinet-Yaak ecosystem of North Idaho and Western Montana.

Kate Kendall, a scientist at the U.S. Geological Service at Glacier National Park, is heading up the research. She used identical methods several years ago to count grizzlies in Montana’s Northern Divide Ecosystem. The 34,000 hair samples led to a revised estimate of 765 grizzlies – 2 ½ times more than previously thought.

By collecting hair, researchers get enough samples to produce statistically valid population estimates, Kendall said. And they don’t have to handle 400-pound bears with sharp claws.

To prepare for next year’s field season in the Cabinet-Yaak, she’s mixed up 2,000 gallons of scent lure, which is ripening in barrels at a Libby, Mont., warehouse.

“To have the best-quality stinky lure, you have to start a year early,” Kendall said.

“When you’re analyzing DNA, it’s something very reliable and indisputable,” said Boundary County Commissioner Dan Dinning. “We need to have the best available, peer-reviewed science so that we can make proper decisions.”

The three-year study will cost $1.7 million, which Lincoln County commissioners have pledged to raise through government and private sources.

Yet, 36 years after the ESA listing, it’s unclear whether the grizzly population is trending up or down, Berget said. People who frequent the woods tell him that sightings are on the upswing. “In talking to our friends and neighbors, they’re seeing a lot more grizzlies out there,” he said.

The Sept. 16 death of a Nevada hunter during a grizzly attack on the Idaho-Montana border is a recent example, Berget said. Steve Stevenson, 39, was killed by a gunshot wound to the chest, fired by a hunting partner trying to kill the grizzly that was attacking Stevenson, according to the Lincoln County Sheriff’s Office. The men had been hunting for black bears.

Montana Fish, Wildlife and Parks later put out an advisory, cautioning other hunters that several more grizzlies had been seen in the Buckhorn Mountain area where the attack occurred.

In Boundary County, a Porthill man killed a young male grizzly in May when it wandered into his yard with two other bears while his children were outside playing. The U.S. Attorney filed misdemeanor charges against Jeremy Hill, which were later dropped. Hill, who received a non-criminal citation and paid a $1,000 fine, said the grizzlies were the first he’d seen on his property.

But reports of more sightings don’t match the U.S. Fish and Wildlife Service’s official estimates. Wayne Kasworm, an agency biologist, puts the minimum number of grizzlies at 40 to 45 in the Cabinet-Yaak ecosystem. Kasworm said the estimate is based on information from radio collars, confirmed bear sightings and some DNA testing.

In the Yaak region, grizzly populations appear to be declining, Kasworm said. In the Cabinet Mountains, the population has been augmented with grizzlies relocated from other areas. As a result, it has grown over the past decade, he said.

For the Cabinet-Yaak grizzlies to be taken off the Endangered Species List, at least 100 bears would have to be documented in a stable or growing population.

Kendall said the DNA study will provide baseline population estimates. “Even though there’s been some level of bear research going on for many years, there’s never been a really intensive study to provide statistically valid information,” she said.

Kendall and her research team did $200,000 worth of preparatory fieldwork this summer. Lincoln County chipped in $50,000 for the work, and the remaining money came from the Forest Service, state and local governments and private donations.

In January, the next $1.3 million will need to be secured for the 2012 field season. Berget said the county has received several large commitments and continues to raise funds.

Kendall has mapped 800 sites for scent corrals in the 2.4 million-acre Cabinet-Yaak ecosystem. Her research team also identified natural “rub trees” that grizzlies brush against to leave chemical scent markers for other bears.

Next year, about 85 seasonal workers and unpaid interns will collect hair samples from the corrals and rub sites from June to September. They’ll re-bait the sites with lure every two weeks to keep the scent fresh.

Running genetic tests on the hair samples will take up to 18 months, with results available by early 2014, Kendall said. Data analysis and a final report would follow.

One of the private donors to the study is Revett Minerals, a Spokane Valley company that owns the Troy Mine, a copper-silver mine in northwest Montana. Company officials donated $50,000 to the project as “a commitment to the communities up there,” said John Shanahan, Revett’s president and chief executive officer.

Revett has already committed to spending $30 million on grizzly bear mitigation, he said. The funding is required as part of the company’s effort to develop a second mine in the area, the Rock Creek project, which is tied up in litigation.

Revett has paid the salary of a grizzly bear biologist at Montana Fish, Wildlife and Parks for about four years, Shanahan said. The company has also purchased bear-proof garbage bins for rural neighborhoods and it must acquire grizzly habitat to offset lost habitat if the Rock Creek Mine is developed.

The 190 workers at its Troy Mine can check out canisters of bear spray for off-hours use. They’re encouraged to carry the pressurized cans of pepper spray when they’re hunting or recreating in the woods. Research has shown that bear spray is an effective grizzly deterrent.

Revett has a “vested interest,” Shanahan said, in keeping both its workers and the region’s grizzlies safe.