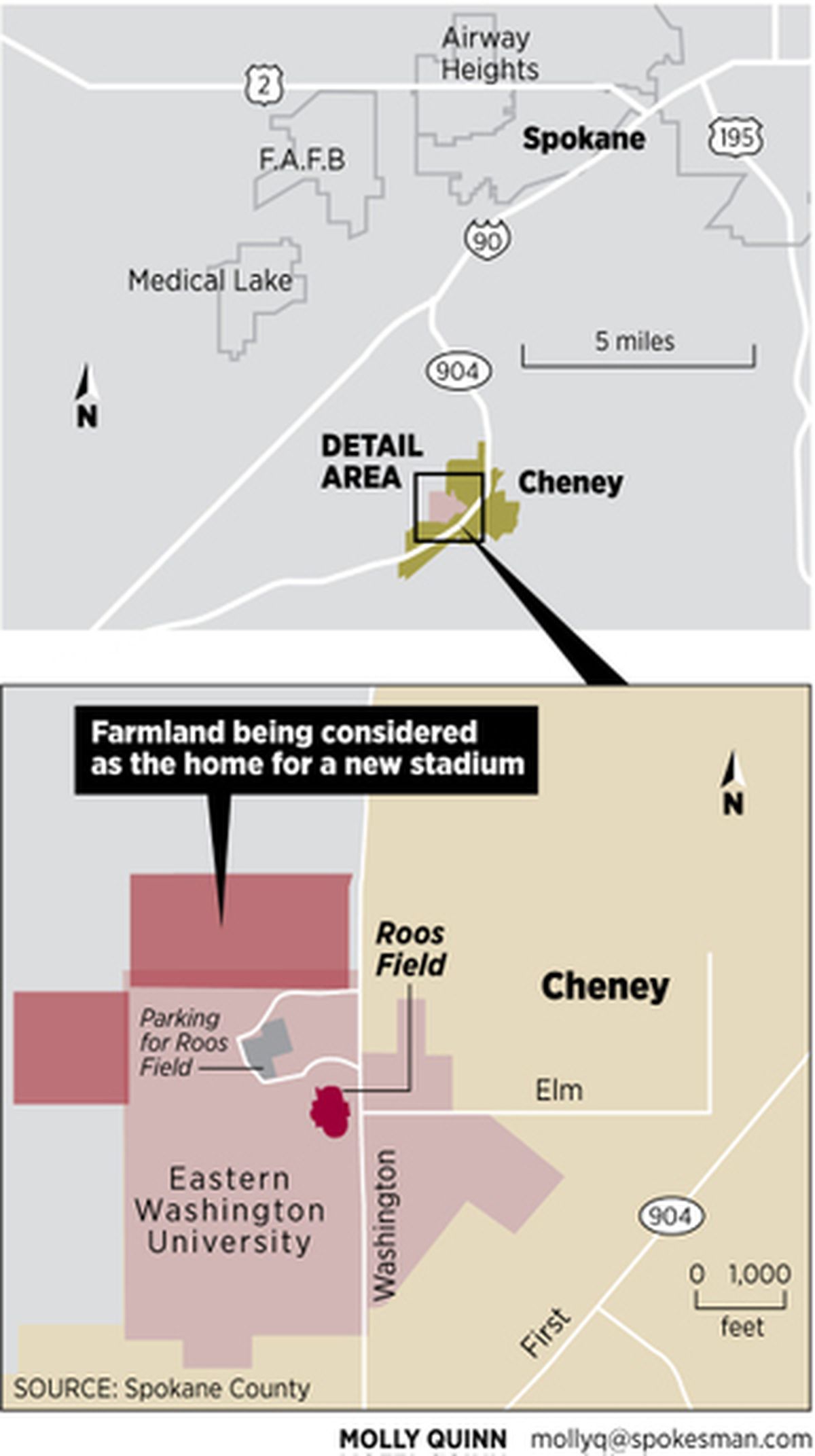 The answer to Eastern Washington’s football stadium dilemma may be near.

Over the next rise, to be exact.

Just north of Roos Field lies farmland that’s suitable for a new stadium. Informal discussions between the landowner and EWU officials are underway, The Spokesman-Review has learned.

“We have discussed some possibilities,” said John Montague, the representative of the estate of his mother, Mildred Montague, who died in 2006.

The estate owns 115 acres north and west of EWU property on the west side of Washington Street. The rolling fields include a large bowl north of two parking lots that currently serve Roos Field.

Officials are proceeding cautiously, but a new facility would further EWU athletic director Bill Chaves’ ambition to improve infrastructure and add premium seating – regardless of the site.

“We’re exploring multiple options to do something surrounding a football game day,” Chaves said this week.

Those options have narrowed with the apparent demise of the Gateway Project, a $65-million multiuse project that failed to attract enough financial backing after it was proposed in the spring of 2012.

Now the university faces two alternatives: renovate 49-year-old Roos Field or build another stadium. Momentum is building, albeit slowly, for the latter.

“They’ve approached me to see if we would be open to something,” confirmed Montague, who said that he recently met with Marc Hughes, an EWU associate athletic director in charge of development.

“They haven’t said much, but maybe one day we’ll get around to kicking some dirt around,” Montague said.

The project could solve many problems at once, but university officials are reluctant to discuss the subject in detail.

“I’m not going to overpromise and under deliver,” Chaves said in a recent podcast. “We’re at the mercy of a lot of other moving pieces.”

The biggest is cost. However, one university source said that the price of a new stadium – even one larger than Roos – could be less than $30 million. Variables include the stadium’s size and the scope of amenities such as premium seating, plus the cost of utilities on undeveloped land.

The price of the land itself is negligible; its assessed value for 2016 is $39,910, according to the Spokane County Assessor.

Whether the school renovates Roos Field or builds a new stadium, funds would be raised through “various private funding opportunies,” said Mike Westfall, Eastern’s Vice-President for University Advancement and Executive Director of the EWU Foundation.

Westfall said that the foundation could raise some of the funds through a private bond.

“Once the scope of the project is finalized, we the EWU Foundation stand ready to partner with athletics,” Westfall said.

With the bottom line uncertain, Chaves wants to be cautious. He noted that although the University of Washington was able to finance a $280 million renovation of Husky Stadium primarily through bonds, the project was backstopped by television revenue from the Pac-12 Network.

“We’re not afforded that ability here,” Chaves cautioned. “We have to be very creative. Now, if we had a spare $100 million, we’d have a shovel in the ground tomorrow.”

Which ground? Chaves didn’t say, underscoring the uncertainty of the situation.

“We continue to work on something that’s never been done in 50 years,” Chaves said. “It’s a heavy lift.”

On the other hand, so is the prospect of renovating Roos Field. Built in 1967, the 8,600-seat facility is showing its age despite the recent additions of an electronic scoreboard and a fan store.

The bathroom/concession building on the north end is an eyesore, and the visitors-side bleachers are the source of embarrassment for many fans.

Roos also is the fourth-smallest stadium in the Big Sky, a fact not lost on fans who want Eastern to be in a more favorable position should some members want to move to a higher classification.

They don’t want to be left behind, especially in the wake of the program’s recent success.

Crowds have grown during a remarkably successful run by the Eastern football program under coach Beau Baldwin.

After the Eagles won the Football Championship Subdivision title in 2010 and Big Sky Conference titles in four of the last six years, the tailgating scene has dramatically increased and interest has never been higher.

“It’s not lost on me that we have to get something done. … We’ve got to take advantage of the success that we’ve had,” Chaves said.

The Gateway Project would have replaced the bleachers with premium seating – one of Chaves’ main goals. It’s unclear how premium boxes would figure in a renovation of Roos Field.

Another hurdle is the track. It’s one of the best in the Big Sky Conference, but flies in the face of recent trends toward football-only stadiums.

With the football team in a new facility, the track would remain at Roos. The field would be used by the women’s soccer team, whose current field lacks seating and other amenities.

Finally, a new stadium would be served by the same parking lots that were built in 2014 to serve the current configuration. The Montague land sits just north of the northernmost road used by football fans to access the parking lots.

A football stadium would fit comfortably inside, with plenty of room left for other buildings. Road access would be added from Washington Street.

Montague confirmed that he’s discussed the “north parcel” with EWU officials, but added that they’re considering other options.

Chaves would not give a timetable for making a decision, but said “I feel good about the conversations we are having.”