The Rev. Brian Mee grew up in Sacred Heart Roman Catholic Church, attending the parish school, serving as an altar boy and even being ordained a priest at the parish church in 1978.

His ordination was a blessing in disguise for me and indirectly led me toward a meeting with the future Speaker of the United States House of Representatives.

As a Boy Scout searching for an Eagle Scout project that would impress the BSA committee, I lucked into a project that would surely be approved. The Rev. Frank Bach, the pastor at Sacred Heart at the time, suggested I could organize a group to help direct parking for the ordination and assist with the reception afterward.

And this becomes the story of how I met Tom Foley.

My neighbor, Roger Morgan, and I had achieved the Eagle rank at nearly the same time so we decided to hold one award ceremony for the two of us. We had heard that our congressman had spoke at an Eagle ceremony for one of the prior members of our troop. We checked with the congressman’s local office, found out when he would be in town and chose a coinciding date for our ceremony so that we could invite him.

It was a shot in the dark but people with class tend to respond in a good way.

We weren’t sure whether Foley would actually show up, even after he accepted our invitation. I recently found a program we had printed for the event and noticed we didn’t include him as a guest speaker. But Foley was not only a long-time representative of the 5th District, he was a 1942 graduate of Sacred Heart School and an Eagle Scout, likely from Troop 350 as were Roger and I. He arrived as promised and spoke about leadership, integrity and virtue.

All the characteristics that would serve him well as the 49th Speaker of the United States House of Representatives from 1989 to 1995.

The small church at 10th and Rockwood, at times dwarfed by the majesty of the Cathedral of St. John not much more than a block away, is going through a little bit of a renaissance.

Mass on Dec. 1 was in honor of the church’s 50 years. Earlier this year work was completed on some improvements to the facility that were paid for through a fundraising project.

“Several people told me they collected money for this 50 years ago,” said Monsignor Kevin Codd, pastor at Sacred Heart.

The building was among the first of its kind in 1969 and continues not only as a place of worship, but also a source of pride for the Sacred Heart community.

The church, with its gently sloping aisles and arc-shaped configuration of pews, literally provides a central place of worship for its congregation.

“The whole building attests to the blending of church renewal with tradition, with several new innovations stemming from Vatican II’s emphasis upon more active participation by the laity. The most prominent is the ‘religion in the round’ concept,” a 1969 newspaper article relating to the dedication of the church said.

As the pews form a semicircle in front of the sanctuary, eyes become focused on the altar, which is one of the building’s unique works of art dating to its construction. The altar, made of Carrara marble, was designed by Maxine Martell and constructed in Italy.

The consignment to do the works of art was quite an honor for a young artist in her 20s.

“It was a nice vote of confidence in me that I could do that at that young age,” Martell said in a recent phone interview from her home on Whidbey Island, Washington. She is the daughter of Carroll Martell, the parishioner whose architectural firm, Culler, Gale Martell, Erickson and Norrie, headed the project.

Perhaps an equally stunning, if not more so, portion of the artwork in the church is the stations of the cross set in the brick walls, also designed by Maxine Martell.

“They asked me at the time if I would be interested in coming up with some enhancements for the building. I proposed that they have (the stations of the cross) be part of the wall, rather than applied to the wall,” she said. 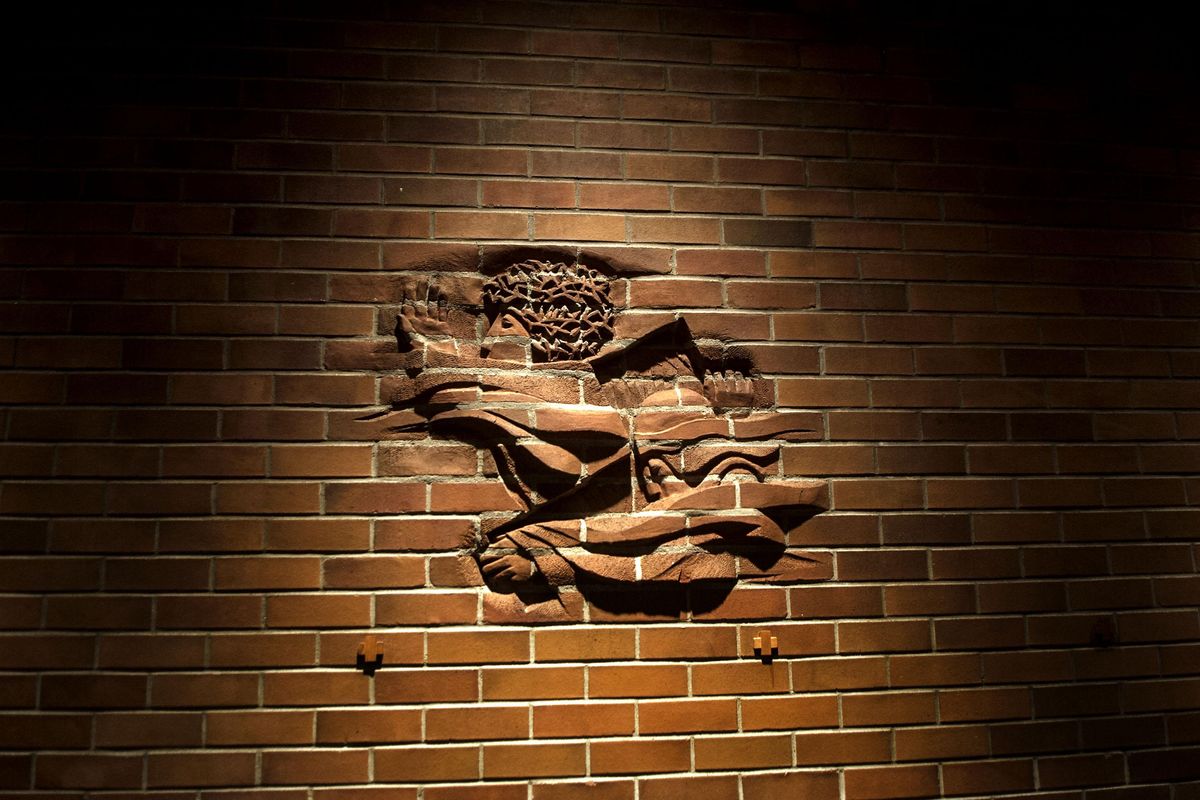 One of the stations of the cross is photograhed at Sacred Heart Roman Catholic Church on Monday, Dec. 2, 2019. The church is celebrating the 50th year anniversary. (Kathy Plonka / The Spokesman-Review)

With that in mind, she designed the stations and had clay that would be used for the bricks delivered to her. She sculpted the pieces, laid them out in her studio, misted them and covered them in plastic to keep them from drying out. They were carefully numbered and coded so that they could be fired in a kiln, then taken as brick to the construction site and placed in their exact spot in the walls.

Codd said he often notices families with young children admiring the sculptures in the walls.

“You can see them tracing (the bricks) with their hands. Young children really love them.”

Maxine Martell has since become a well-known artist. Her works have been shown at Gonzaga University’s Jundt Art Museum and she served as art curator for the Cheney Cowles Museum. Currently her work can be seen at the Seattle/Tacoma International Airport and in the collections of the Kobe Art Museum in Japan, Pratt Graphic Art Center in New York, and Nordstrom stores across the United States, her website says.

The Rev. Brian Mee, a graduate of the parish grade school, was the first parishioner to have his ordination at the new church. In July 1978 he took the solemn vows of priesthood at Sacred Heart. Several years before he and four other parishioners who were seminarians at the time served as altar boys for the dedication Mass at the new Sacred Heart.

“It was a very vibrant parish. One of the things growing up there is that the school life and social life all seemed to revolve around the parish,” Mee said, when asked to reflect on the memories of his boyhood parish. “It was just a healthy parish, and I was proud to be a part of it.

“I still consider myself a son of Sacred Heart parish.”