Shari Blum first heard about the rare neuro-genetic disorder Angelman syndrome when her daughter Elizabeth was 13 months old. The syndrone’s symptoms often include balance issues, gross and fine motor skill impairments, lack of speech and seizures. A specialist told her how the condition would affect her daughter’s daily life.

“The next things I remember the doctor saying is about her not being able to walk until she’s 3 to 5 years old and not being able to talk,” said Blum, who’s lived in the Wandermere area for four years. “I said, ‘Forever?’ She said, ‘Yeah, and she will never be able to live on her own.’ ”

At the time, Blum’s family – which also includes Shari’s husband, Jon, and their son, Landon – lived in Portland. Blum wanted better outcomes for Elizabeth, now 6, so she began to do research and connected with other families affected by Angelman.

Nearly three years ago, Blum started hearing about benefits from the use of hemp and cannabidiol, popularly known as CBD. “I had heard they helped with improved cognition for abilities and understanding along with better sleep and eating,” Blum said. “These were things I needed.”

Blum couldn’t find what she wanted on the market, so she researched alternatives that included organic hemp extracts and terpenes, the organic compounds that give plants their scents and therapeutic qualities.

She eventually created a tincture, which is an oil taken in the mouth. It contains many individual cannabinoids as well as natural terpenes from hemp and a medium-chain triglyceride coconut oil.

Within weeks of Elizabeth taking regular daily doses, Blum said her daughter showed significant improvements. “She first got her dosages in September of 2017, and six weeks after that, she said, ‘Mom,’ in the car,” said Blum, who caught it on video. 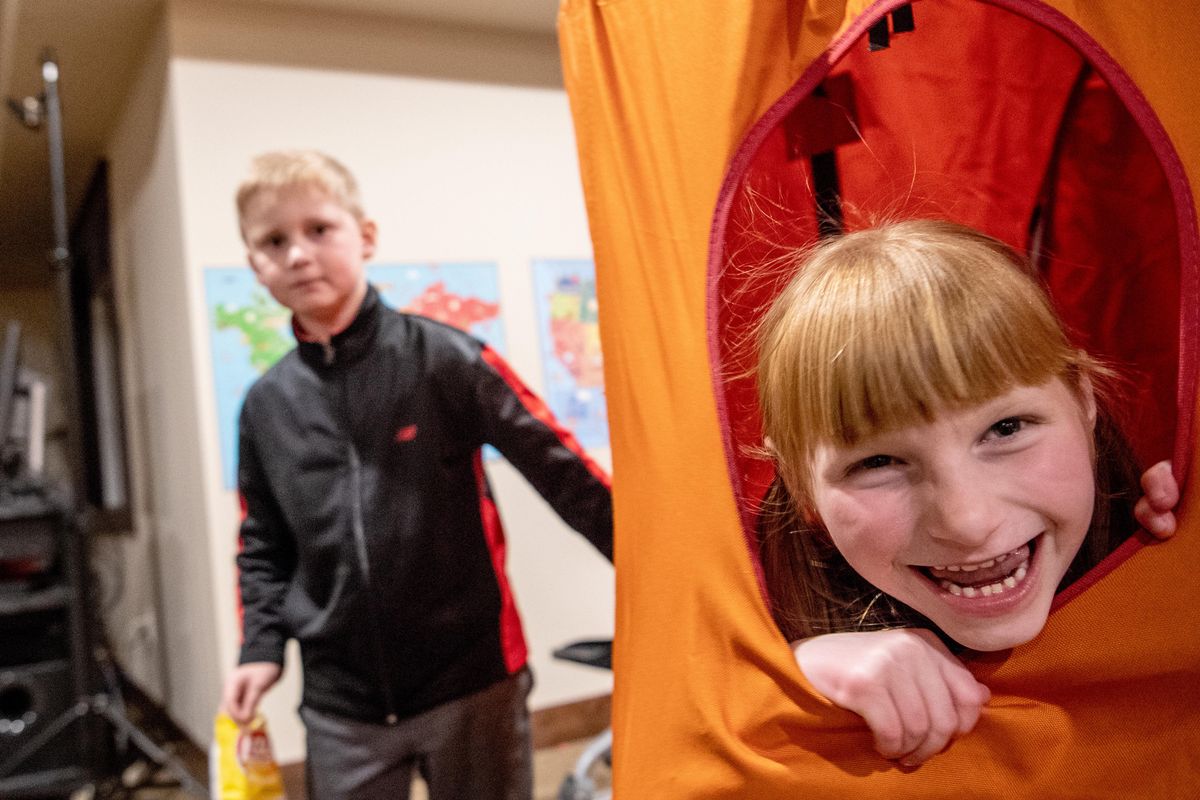 Landon Blum, 7, left, swings his six-year-old sister Elizabeth, in the family room at their home Monday, Nov. 25, 2019. Elizabeth was diagnosed with Angelman Syndrome, a congenital condition that causes delays in speech, balance and other development problems that are similar to autism. Mother Shari Blum began researching hemp extracts and began trying them on her daughter. After seeing remarkable results, she began compounding and selling tinctures for other families of kids with Angelman Syndrome. The company is Wings Tinctures. (Jesse Tinsley / The Spokesman-Review)

“Her walking improved, her gait came closer together, and it was a more organized walk,” Blum said. “She had a much more deep and restful sleep and a lot of improvement in fine motor tasks.”

“From there, others in our Angelman syndrome community wanted the tincture, as well, so it got to where I needed to start a website, Wings Tinctures.”

The Wings Tinctures website sells what are considered supplements, similar to vitamins, so they’re not regulated by the Food and Drug Administration, Blum said. Many of its customers include other families who have a member with Angelman syndrome.

Though federal cannabis regulations make it difficult to fully study the effect of hemp and CBD oils on humans, two local doctors said there’s growing evidence that they help for a number of neurological conditions.

Cannabinoids, including CBD, are thought to affect the body’s natural endocannabinoid system. CBD is a derivative of cannabis found in marijuana and hemp plants. Marijuana has a much higher level of tetrahydrocannabinol, or THC, the psychoactive cannabinoid that causes intoxication. Hemp has higher levels of CBD.

Dr. Jason Aldred, a Spokane neurologist, said he’s aware of limited medical research that considers CBD benefits, such as a recent trial at University of Colorado School of Medicine on possible soothing effects for Parkinison’s disease, a nervous system disorder.

“It was using CBD with almost no THC and prescribed under medical circumstances,” Aldred said. “The trial found that it may help with sleep and anxiety in Parkinson’s patients.”

There’s also some evidence that CBD could help improve seizures in animal models of Angelman syndrome, he said. More studies are needed to test long-term effectiveness and safety, Aldred said.

“There is a need for the CBD research because there are a lot of children who have seizures that are extremely difficult to control, and they desperately need options.”

In June 2018, the U.S. Food and Drug Administration following clinical trials approved prescription Epidiolex, a CBD oral solution for the treatment of seizures associated with two rare and severe forms of epilepsy in patients 2 and older.

Dr. Matt Layton, a physician and researcher at Washington State University Spokane, agreed that there is evidence such as the clinical trials resulting in Epidiolex and other studies that strongly indicate benefits from plant cannabinoids.

Layton also said a group called Charlotte’s Web in Colorado drew wide attention for developing a strain of CBD that decreased seizures in a child named Charlotte. The attention eventually lead to Epidiolex, he said.

“People got really interested in what is the mechanism there, and then a company in Britain marketed it,” he said. “Charlotte was the girl who had the genetic disorder with all the seizures, and an extract of this particular strain helped.”

A large body of research also shows CBD’s safety in humans, Layton said, including information listed in the FDA document for Epidiolex. “The reason CBD is so prevalent is it’s not hurting anyone,” he added. “Basically, it has very low toxicity to humans.”

“What would I say to a parent of an Angelman child? That there is anecdotal evidence that cannabinoid extracts help neurological conditions. Given the alternative, and given the safety profile CBD, I would not discourage them from trying it.”

Blum also looked into the Charlotte’s Web story. “It’s the largest CBD-hemp company for the general population to buy from,” she said. “I was looking at that, and some other brands, and trying to compare differences. What I found was there was nothing out there that had all the stuff in it to make it the most effective.” So she developed her own.

Today, Blum credits an intensive physical therapy treatment in Portland and the Wings Tinctures as helping her daughter Elizabeth reach earlier milestones and with better results.

“It’s awesome for any neurological patients,” Blum said. “It deals with neuroplasticity and helping build new pathways in the brain. When we switched to TheraSuit, I saw a huge difference. Elizabeth walked before she was 3 years old.”

Blum said she sees Elizabeth able to do new things each time they return from that therapy, most recently in November. Her daughter picked up the hotel room key and tried to put it in the door. She figured out a remote control for the door at therapy.

“It’s just like little switches come on, and you’re like, wow, you haven’t done that before,” Blum said.

Blum is involved in a national organization working toward a cure: Foundation for Angelman Syndrome Therapeutics. The organization funds Angelman research and anticipates the first human genetic clinical trials beginning in 2020. The foundation says Angelman syndrome is a single-gene disorder caused by a loss of function in the UBE3A gene on the maternal 15th chromosome.

The condition affects about one in 15,000 people, and it’s named after Dr. Harry Angelman, an English physician who discovered it. It’s sometimes misdiagnosed as cerebral palsy or autism. In most cases, Angelman syndrome isn’t inherited. Instead, the genetic changes occur randomly.

Blum said actor Colin Farrell has spoken often about Angelman syndrome because he has a teenage son with the condition. Farrell is a regular presenter at FAST’s annual Global Summit & Gala, which was last week with researchers, educators and caregivers in Chicago. Blum regularly attends because her business is a sponsor of FAST’s research support.

“There are so many ways that they’re working on Angelman syndrome with multiple modalities,” Blum said. “We may very well hear about more than one clinical trial coming up next year.”