Since 2011, pronghorns destined for Washington have been captured five times in Nevada, which estimates its antelope population at 29,000. Eastern Washington holds roughly 400 pronghorns stemming from the following translocations:

99 released in 2011 on the Yakama Indian Reservation.

52 released in 2016 on the Colville Indian Reservation.

98 released in 2017 on the Colville Reservation, bolstering the numbers in that area to about 150. About a third of the herd has left the reservation, crossing the Columbia River to reside around Douglas County.

49 released in January 2019 on the Yakama Reservation, bolstering the herd in that area to more than 260, with about a third off the reservation.

Pronghorn is the proper name for the unique North America big-game animal with bucks that have “pronged” horns made of hard, hairy sheaths that fall off and regrow each year.

The Latin name, Antilocapra americana, means “American goat-antelope,” but the pronghorn is not a member of the goat or the antelope families, and is not related to the antelopes found in Africa.

Still, sportsmen and biologists often call pronghorns antelope, or refer to them by the nickname “speed goats.”

Following are links to web pages and a series of The Spokesman-Review stories and reports documenting the reintroduction of pronghorns to Eastern Washington.

Overview: Pronghorns in Washington, Department of Fish and Wildlife site.

2006: Assessment of Pronghorn Habitat Potential in Eastern Washington, funded by Safari Club International and produced by the Washington Department of Fish and Wildlife

North America’s fastest land animal is getting some traction in Washington.

Up from zero in 2011, about 400 fleet-hoofed pronghorn antelope are roaming sage and rangelands from the Yakima area to the Okanogan, the result of reintroduction efforts by two Native American tribes and sportsmen.

The latest translocation occurred in January, when 49 pronghorns captured by helicopter net-gunning in Nevada were transported in stock trailers and released on the Yakama Indian Reservation. This was the fifth release into the state in the past eight years.

The Yakama Nation has made three translocations totaling 198 pronghorns, starting in 2011. The Colville Confederated Tribes have made two releases, in 2016 and 2017, totaling 150 pronghorns.

The Washington Department of Fish and Wildlife (WDFW) has not officially supported or opposed the translocations to tribal lands.

The Yakama effort has been funded largely with volunteer support from Washington chapters of Safari Club International (SCI). The Colvilles report they have received significant federal funding from the Bureau of Indian Affairs.

Slightly smaller than white-tailed deer, pronghorns often are more visible, since they prefer wide-open spaces where they rely on keen eyesight and speed – clocked at more than 50 mph – to evade predators. 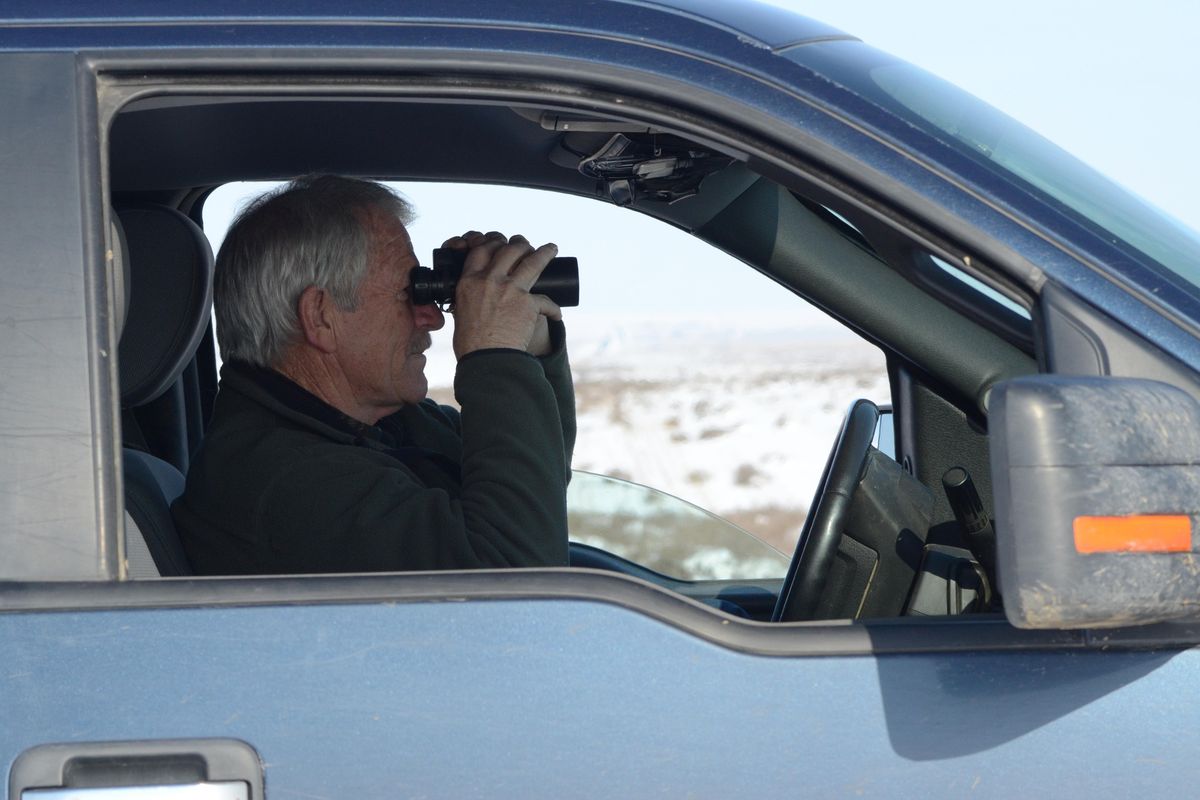 Joe Greenhaw, a hunter and member of Safari Club International from Western Washington, scans lands near the Yakima Indian Reservation during a pronghorn survey in February. Greenhaw has helped raise money for funding pronghorn reintroduction since 2001. Rich Landers/COUTESY (Rich Landers / The Spokesman-Review)

A minimum population of about 260 pronghorns was counted in an aerial survey conducted this month by the Yakama Nation, SCI and the WDFW, with about 70 found just off the 1.37 million-acre Yakama Indian Reservation.

The Colville Confederated Tribes are still working on a survey focused on the southwest portion of their 1.1-million-acre reservation. A survey after translocations in 2016 and 2017 found 99 pronghorns on the reservation and 43 off the reservation. A number of animals from each release broke away, swam across the Columbia River and took up residence in Douglas County, ranging as far south as Quincy, Harris said.

The animals are considered a game species, and the state is required to manage those animals that come off the reservations, he added.

“Now that they’re on and off the reservations, we’ll be doing all we can to assure that the pronghorns do well on our landscape, and that landowner tolerance remains high,” he said.

A North America native, pronghorns are abundant in some Western states, but Washington is at the fringe of their historic range, Harris said.

A 2007 study found that pronghorns once roamed Eastern Washington, but never extensively, Harris said, noting, “Whatever was here was pretty much gone by the 1800s.”

Five state-sponsored attempts to reintroduce pronghorns in Washington between 1938 and 1968 ultimately failed. The pronghorns seemed to take hold, but then declined for unknown reasons, Harris said. By 1980 they were gone.

SCI chapters started working with WDFW in 2001 to fund research and provide support for another try at pronghorn reintroduction.

The clubs became frustrated with all the requirements hobbling the state in advance of a reintroduction, Joe Greenhaw of SCI’s Seattle-Puget Sound chapter, said.

“When we realized the state just wasn’t going to get it done, we looked for another partner,” he said. “The Yakama Nation already was looking into it.”

Because Indian reservations are under the jurisdiction of sovereign nations, the tribes can bypass the lengthy and costly environmental analysis and landowner acceptance process a state agency would be required to undertake.

“The Department of Agriculture was concerned about the potential of pronghorns bringing in disease that could affect livestock,” he said. “The animals were all tested before being released, so I don’t think that was ever a legitimate issue, but one to look at.”

As pronghorns have expanded, the state has joined the tribes as a partner in monitoring the new species on the block.

“What stands out about this project is that the state, the Yakama Tribe and a sportsman’s group are all working together, and that’s a big deal,” said Deb Barrett of Naches, past president of the Central Washington chapter of Safari Club International. Barrett and her husband, Doug, have been involved with organizing six SCI clubs and dealing with the pronghorn project for 18 years.

In 2014, Greenhaw was honored as the WDFW volunteer of the year, largely for his efforts for pronghorns. SCI chapters have provided funding for state habitat assessments, aerial surveys, translocation costs and GPS collars – nearly $300,000 since the efforts began in 2001, he said.

“I’ve seen the good years of how much game there was in the ’60s and ’70s in Washington, and I figured it’s time to give back,” Greenhaw said, noting that he wants “conservationist” to be as much of his legacy as being a hunter.

Hunters and their contributions of time and funding have been the backbone of big-game management, he said.

Same with the Barretts, who were key to organizing volunteers to help Nevada Department of Wildlife with capturing pronghorns. The volunteers provided their trucks and trailers to rush the animals back to the reservations for release.

Limited hunting could eventually be allowed on pronghorns, but that’s a long way down the road, Harris said. They’re listed as a protected species in Washington.

Many of the Nevada pronghorns initially released on the Yakama Reservation in 2011 dispersed at first, as if looking for home. But the animals in the second and third releases moved less, “likely because they quickly found other pronghorns living there,” tribal wildlife biologist Dave Blodgett III said.

So far, the reintroduced pronghorns have moved seasonally and act much as pronghorns do in other states, he said. They group up during winter in lower ranges, mostly on the Yakama Reservation. In spring, females spread out on and off the reservation.

“They’d rather be alone to have their fawns, the better to avoid predation,” he said, noting that the does join up in groups again as the fawns gain size and strength.

The Yakamas have no plans for future translocations, Blodgett said.

“The second and third releases are providing genetic diversity to the initial release, and a high percentage of the recent releases are wearing GPS collars supplied by SCI,” he said. … “The collars will allow us to monitor and better understand how the population is growing and moving and using habitat.”

Harris said the pronghorns have been staying primarily in the grazing lands and not so much in irrigated crop lands croplands.

“We hope that will continue to be the case,” he said.

“Almost all of these animals live on private land. The landowners didn’t ask for them, but they’re there. The good news is that pronghorns by and large are not a difficult species to get along with. They are small, with small hooves and dinky little mouths.”

“Most landowners we talk to are thrilled to have antelope around,” Greenhaw said.

Harris told the state Fish and Wildlife Commission on Jan. 10 that he was planning to hold meetings in rural areas where the pronghorns are found, to hear what the public thinks of them. He also hopes to work with the tribes on management plans for the future.

Among all land animals in the world, only the cheetah is known to be faster than a pronghorn, experts say. But a group of pronghorns can outdistance nearly any other critter, pacing for miles at half speed in open terrain.

Fences are the nemesis of pronghorns, and there are plenty of them in Eastern Washington. Hundreds of miles of barbed wire are stretched across the Colville Reservation alone.

Rather than jumping, pronghorns prefer to go under fences. Tight barbed wire meant to contain cattle can block pronghorn migrations or escape routes.

“Modifying fences might be a way to channel them to where we want them to be, and discourage them from being where we don’t want them,” he said.

Research has found other areas in the state that likely could sustain pronghorns, “although none of the assessments ranked extremely high,” he said. Viable habitat identified includes the Hanford area and Yakima Training Center.

The big questions for the state are long term, Harris said: “Will they always have a place? Will they find ways to increase without causing difficulties with agriculture?

“I’d call it a work in progress with a promising start.”