If you could pull yourself away from the Seattle Seahawks’ playoff game with the Dallas Cowboys, and the Northwest’s favorite – or something – NFL announcing crew, Joe Buck and Troy Aikman, you probably turned to Gonzaga’s dominant 91-48 West Coast Conference-opening victory over visiting Santa Clara.

Where you may have been surprised by the announcing crew.

Saturday night’s game was the year’s broadcast from Root Sports, and featured two of its veterans, Tom Glasgow on play-by-play and analyst Francis Williams.

• It’s nice to have an analyst from outside the neighborhood who is tied into the local basketball scene.

Williams certainly is that. A former Seattle high school coach, he’s experienced the game at just about every level, from AAU to the NBA. So he appreciates all type of players.

But none more than Brandon Clarke. Maybe to a bit of a fault.

“(Clarke has) brought an element to this team that they have not had in the past,” he said before the game, “with his superior athleticism.”

Johnathan Williams and Erroll Knight may beg to differ, but Clarke is a difference maker, that’s for sure.

He certainly was as the Zags snapped Santa Clara’s six-game winning streak.

Clarke had 16 points, six rebounds and another five blocks, leading Williams to say, “To me, (he’s the) second coming of Kawhi Leonard,” referring to the two-time NBA all-star out of San Diego State.

But in this one the offensive star, again, was Rui Hachimura. He finished with 25 points, five rebounds and the broadcast crew’s player of the game award, given with almost 8 minutes left.

“Twenty-one (Hachimura) and 15 (Clarke) are real effective inside for Gonzaga,” Williams understated – on purpose – in the second half.

• The Root crew was there to see it, though they may not have appreciated its significance.

The “it” was Josh Perkins’ first real dunk.

Perkins had a runout with 3 minutes left and powered up a 2-foot, two-handed dunk from the right side.

“That may be the first legit, official dunk of the season for Josh Perkins,” Glasgow said, mentioning Perkins’ other somewhat controversial dunk earlier this season.

Problem was, Glasgow was underselling it. For Perkins, a redshirt senior, it was his first legit, official dunk of his career.

Glasgow, however, was a relaxing change of pace. He was quiet when needed and excited when that was called for. He also seemed to have every stat needed at his fingertips – when GU (14-2, 1-0 in WCC play) had its ninth blocked shot, he quickly dropped in the school record of 11 – and into our ears.

• The most anticipated moment of the night came with 14 minutes, 23 seconds remaining until halftime when first Killian Tillie and then Geno Crandall jogged up to the scorer’s table.

It was Tillie’s first appearance this season and Crandall’s first since the Maui tournament.

Tillie, who dealt with an ankle surgery, played 6 minutes before intermission, just getting his game legs. But Crandall, who averaged five points in six games before injuring his right hand, entered in attack mode.

In fact, he attacked Tahj Eaddy on defense, anticipating his move, beating him to the spot and making a steal. For some reason, veteran referee Ruben Ramos saw it as a foul, negating the energy-induced turnover.

Tillie finished with five points before fouling out with 11 minutes left to play, while Crandall had eight.

“Everything you could want, they are going to have,” Williams said.

• During the pregame buildup, whenever Santa Clara highlights were shown, they came from the Broncos’ (9-7, 1-1) win over Washington State recently at the Arena.

It made Eaddy, who finished with 16 points against the Cougars, look like a Michael Jordan-like scorer.

• The usual announcing crew may not have been on air, but one of them, at least, received some air time.

Richard Fox, who usually teams with Dan Dickau next to Greg Heister, popped up on the screen a couple of times sitting in the stands underneath one of the baskets.

Not as good a seat as usual, but at least Fox didn’t have to watch his language.

• Want a definition of cruelty as it pertains to sports? How about the regional NFL’s team playoff game showing on another station at the same time as the local highly ranked college basketball team. To make matters worse, both games went to halftime at the same time, even though the Zags started an hour later. 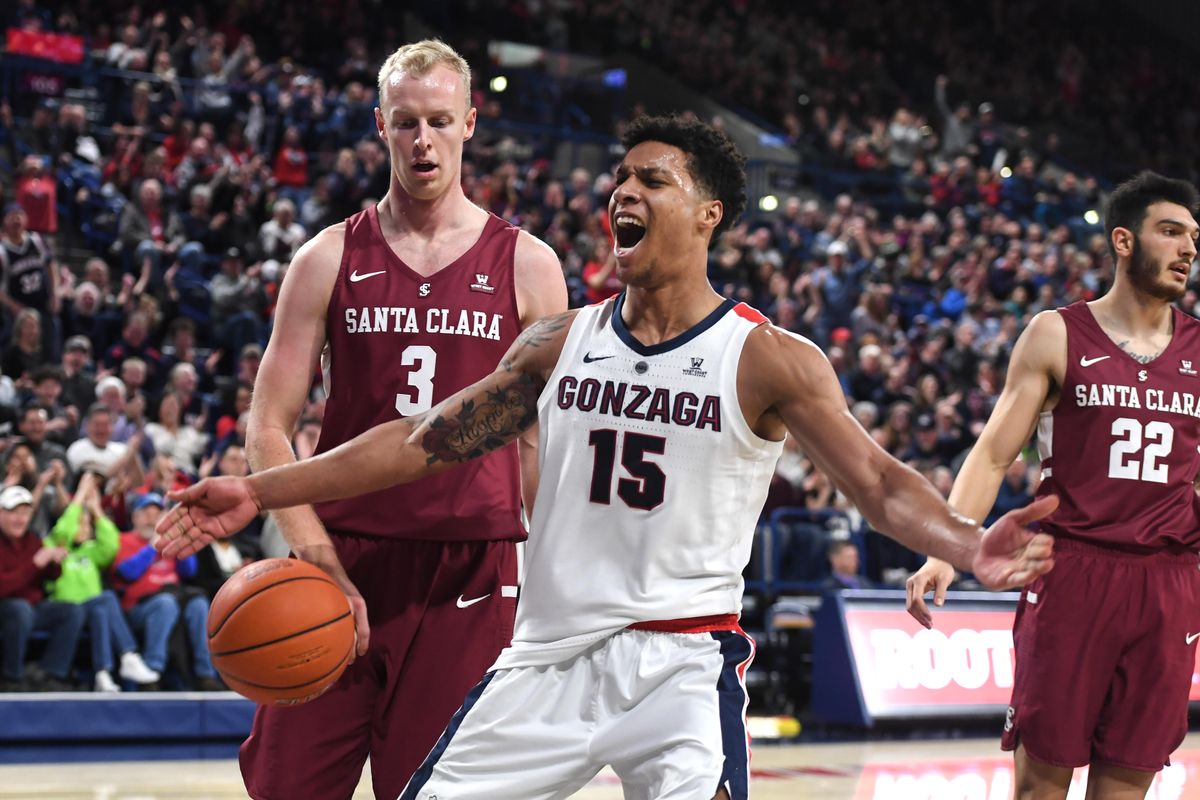