One way to support the Lookout-Stevens Winter Recreation Area is by attending this years Backcoutry Film Festival. Money from the festival goes toward the ongoing shared-use effort. Plus, the adrenaline-filled films are a fun way to spend an evening.

The film festival is Jan. 31 at The Hemmingson Center (702 E. Desmet Ave.) on the Gonzaga campus. To buy tickets visit winterwildlands.org/backcountry-film-festival/.

In a jam-packed room lined with lockers and the musky smell of oft-wet clothing, a circle of 25 covered familiar ground.

Chris Pfahl sat at the head of the table. He’s president of the Shoshone County Groomer Association. An avid snowmobiler, he lives and works in the Silver Valley.

“We’ve been able to work this out for 20 years,” Pfahl said to the group of assembled snowmobilers and skiers. “And I don’t think the snowmobilers want to pick a fight. We just want to protect our trails.”

“There is plenty of room for everyone to have a lot of fun,” he said.

Monday’s meeting in the ski patrol locker room of Lookout Pass Ski resort is just one in a two-decade effort spearheaded by Latta and Pfahl. The goal is to develop a shared use plan for snowmobilers and back country skiers that the U.S. Forest Service can adopt.

Representatives from Idaho, Montana and Washington attended. Forest Service staff planned to attend but couldn’t due to the federal shutdown.

The effort has stalled numerous times and not because the snowmobilers and skiers can’t agree.

They can and do. 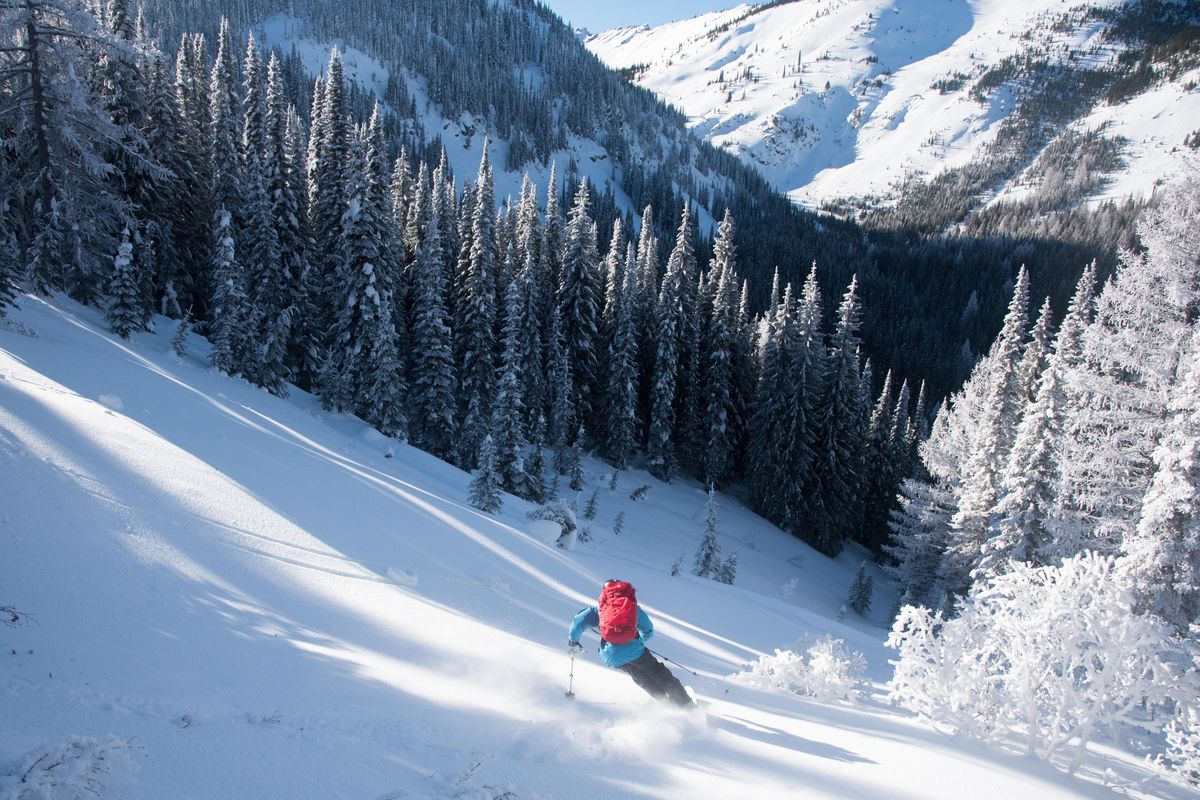 Landon Crecelius skis downhill on Monday Jan. 14, 2019. A coalition of snowmobilers and backcountry skiers met at Lookout Pass to discuss a shared use plan. Representatives from both groups hope the Forest Service formalizes the plan. (Eli Francovich / The Spokesman-Review)

Instead, the effort has been stymied by the “revolving door” that is Forest Service leadership, Latta said. Every time the various groups have convinced a forest manager to buy into the effort, the manager would relocate and the citizen effort would be left at square one.

“We’ve never gotten close,” Latta said. “But I’m really feeling that right now we’re at the spot where we have the most potential.”

The issue at stake is access to the St. Regis Basin, south of Lookout Ski area, and the Stevens Peak area. Both areas are popular with multiple winter recreationists because it’s easily accessible from the highway and has terrain suitable for beginners, intermediates and experts.

But snowmobilers and skiers often don’t see eye-to-eye. Skiers bemoan the noise, speed and impact of the heavy machines. Snowmobilers often feel that skiers are trying to take away their favorite places to play.

Through careful work, Latta and Pfahl have overcome many of these differences, developing an uncommon level of trust between the groups.

That collaborative spirit was on full display during Lookout’s expansion planning in 2017. Skiers and snowmobilers presented their concerns with the expansion, which will develop slopes traditionally used by both groups.

As part of that 2017 discussion, the groups drafted a shared-use map. Under the terms of the unofficial agreement, snowmobilers would have a dedicated path to access the St. Regis Basin, as would skiers. Meanwhile, 3,500 acres in the Stevens Peak area would be designated nonmotorized (see map).

That sort of agreement is unusual, said Hilary Eisen, the policy director at the Winter Wildlands Alliance. She works with skiers around the West on access issues.

“There are not very many places in the country where snowmobilers and skiers are sitting down in a room and saying, ‘Yeah we agree on this,’ ” she said. “That’s why I use this as the example I’d love to see in other place.”

Eisen attended Monday’s meeting. The next step, she said, is for the Forest Service to adopt the plan that’s been hammered out by the snowmobilers and skiers. She said the most likely mechanism for that to happen is the Forest Service’s winter travel management rule. The rule was adopted in 2015 and directs national forests to manage for above-snow travel.

“We’re doing the homework they assigned to us,” she said. “So we’d love to see the Forest Service then carry whatever it is we come up with forward.”

“We really do believe that all users have a responsibility to care and share,” she said. “We don’t think that a motor belongs on every acre of public land, but we think there should be good reason for prohibiting them.”

Mitchell understands why skiers would rather not see snowmobilers while they’re touring. In the case of the Lookout-Stevens Winter Recreation Area, she said the local snowmobile clubs agreed that the Stevens Lake area was better suited for backcountry skiers.

“The hope is that would be formally adopted into the forest travel plan,” she said. “There is a way to work this out and to provide access to everyone and a good experience to everyone.”

Part of the reason Mitchell, Eisen and others believe the Forest Service needs to be involved is because the current informal agreement isn’t working. Increasingly, the snowmobilers and skiers who come to the Lookout area aren’t from the surrounding communities. They do not know, or perhaps care, about a handshake agreement worked out over decades.

On a recent ski trip, that disregard was evident. A trail nominally closed to snowmobiles was heavily trafficked by the machines, despite numerous signs.

“We’ve really done everything that we can do as the general public and now it’s really on the Forest Service to make this real,” Eisen said. “If it’s not enforceable, there is nothing you can do about it.”

Following the Monday meeting, uninformed snowmbilers, believing that the effort was a unilateral land-grab on the behalf of skiers, descended on the Stevens Peak Backcountry Coalition’s Facebook page.

That ignores the fact that the snowmobile clubs in the areas adjacent to Stevens Peak have agreed to the proposed closure.

Latta has stepped back from the effort, passing the torch to a younger generation of backcountry enthusiasts. While he doesn’t ski as often, he said the Lookout-Stevens Peak area remains close to his heart.

“I’ve skied a lot of British Columbia going to backcountry huts and I’ve had some of my best days skiing up in this area,” he said.