For Alisha Rawley’s first-graders at Linwood Elementary School, the entertainment began last year outside their window.

Bulldozers flattened the ground. Concrete, steel and brick rose toward the sky – and the future.

As the workers toiled one day, one of Rawley’s students stared out the window.

“What are you looking at?” Rawley asked.

In a few more months, the show will end with a flourish. One of the oldest schools in Spokane will give way to the newest and largest elementary school building in the city – a teachable moment if there ever was one. 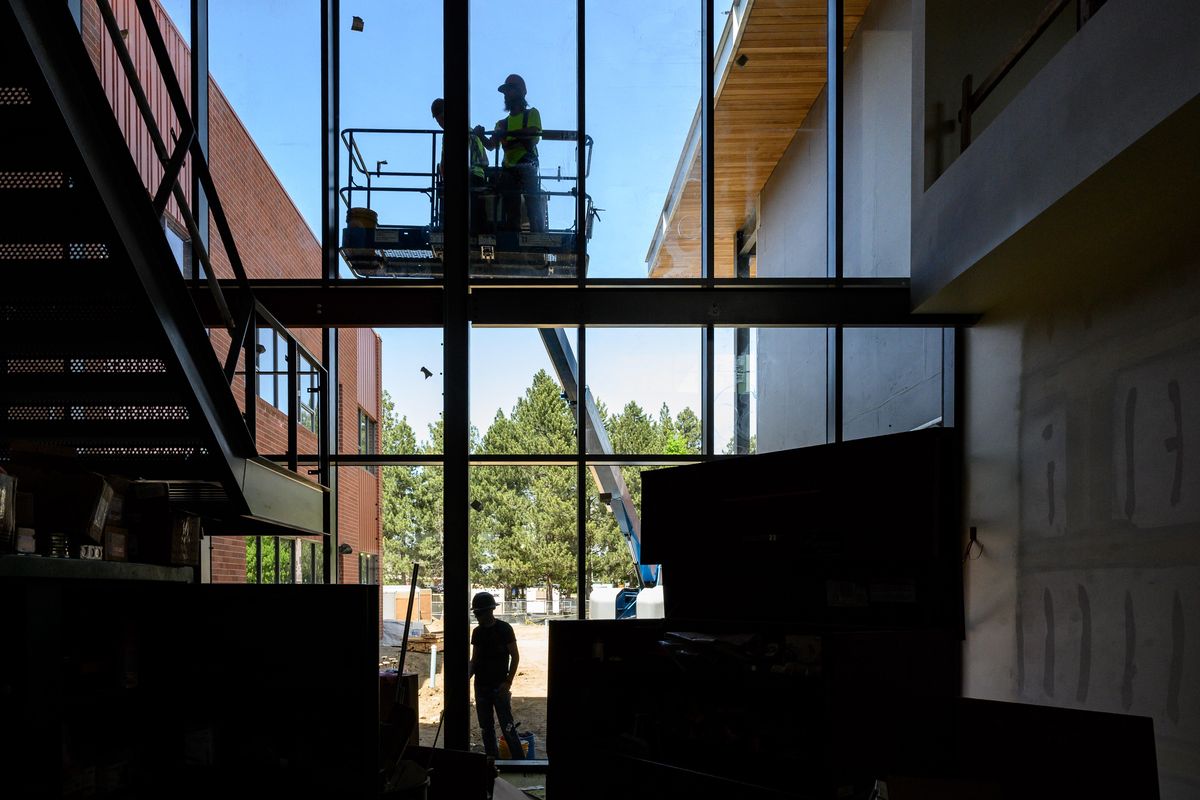 Construction workers seal windows on the north side of the new Linwood Elementary School at 906 West Weile Ave. The school design features large windows to help brighten up hallways and common spaces. The building is nearing completion and will open for students in the 2019-2020 school year. The school features 36 classrooms and cost $2.6 million to construct. (Colin Mulvany / The Spokesman-Review)

Rawley has turned distraction to her own purposes, “connecting our lessons to what was happening outside,” she said.

The triangle of land between Wall and Monroe streets, west of Holy Cross Cemetery, is one of the busiest in Spokane, thanks to the capital bond passed by voters in 2015.

Late this summer, more than 500 students and staff will move from a 62-year-old building into the city’s most modern facility.

At 76,559 square feet, it also will be the biggest, with 36 classrooms, a library, gym and stage and multipurpose room.

The project was designed by Integrus Architecture. T.W. Clark Construction is the general contractor.

It also will come with air conditioning, which would have come in handy on a warm Tuesday afternoon.

“But I’m also excited for the new gym and the multipurpose room,” Newcomb said.

The current building houses what staff and students call the “gym-a-café-torium,” an overused space that must accommodate breakfast, lunch, PE and student performances.

That will change this fall, with more space for activities but especially learning.

New classrooms will be about the same size as the old, but with more windows. Some will have dividers that will allow more flexibility for team teaching in the upper grades.

For example, sixth-grade teachers in language arts, social studies and math will be able to share students in one large room “so that students with similar abilities can be in groups,” Principal Gina Naccarato-Keele said.

The arrangement not only allows more flexibility for teachers, but cuts down on travel through long hallways, said Naccarato-Keele, who’s having quite a year. Last fall she was named the state’s Elementary School Principal of the Year.

Also, proximity to each other will allow teachers to collaborate. Currently, Newcomb is at the other end of the building from the other kindergarten teachers.

In the new building, teachers “could teach the whole group lesson and then they could each take smaller groups based on where the kids are at,” Naccarato-Keele said.

“This will allow more team-teaching,” said Greg Forsyth, the district’s director of capital projects and planning. “We can break the kids into learning groups and bring them back together.”

Classrooms are bright, even more so thanks to light-colored walls and an abundance of windows. If it’s too bright, shades are ready.

All classrooms will include an interactive smart projection system. Students can tap a board, and their movements are captured by a camera that allows them to manipulate images on the board.

More flexibility will be found in the hallways, where breakaway spaces abound.

Another kind of flexibility will be found in the library, where soft chairs will share space with bookshelves.

The library’s ceiling is crafted from cedar, one of the rare frills in a building heavy on brick and mortar. However, there are splashes of color in the stairwells and other spaces.

Most of the finish work is incomplete, but the building is expected to be ready for a ribbon-cutting ceremony on Aug. 29, the first day of school.

Like his classmates, fifth-grader Eric Kerr has witnessed the show from the playground.

“I’m just very excited,” said Kerr, a third-generation Linwood student. “I think it will be like opening a big present.”