Directions: The 8,000-acre Fishtrap Recreation Area trailheads are accessed from Interstate 90 about 25 miles west of Spokane. From Fishtrap exit 254, drive south on Sprague Highway as follows:

For Fishtrap north trailhead, go 2.5 miles and turn left on Fishtrap Road. Drive 0.6 mile to the trailhead parking area on the right.

For Fishtrap south trailhead, go 3.6 miles. Turn left on Miller Road. Drive 0.2 mile to the T at the Miller Ranch House; turn right (south) and go 0.8 mile to the trailhead.

Dogs must be leashed in BLM developed areas such as trailheads, but can run off-leash in recreation area. However, control dogs around other users, especially horse riders. Rattlesnake encounters possible. Pick up after dogs at trailheads.

The scablands east of Sprague have a colorful recreation history documented from 1900, when an area trapper established a rustic fishing resort with a few rowboats at the inlet, where Hog Canyon Creek flows into the basalt-rimmed Fishtrap Lake.

In the early days, the resort workers would run a team of horses pulling a livery wagon up the road to the Northern Pacific railroad stop and shuttle campers who came from throughout the area to fish. The resort’s stone house and hotel were built between 1910 and 1912. Just after World War I, the large wooden dance hall that straddles the inlet was built, becoming the gathering spot for lively Fourth of July celebrations.

But the depression took its toll, and the resort fell into disrepair. World War II hurt business further. The once-elegant hall in its scenic setting has been used as little more than a boathouse since.

Trail markers were set to be installed this weekend, but hikers, mountain bikers and equestrians who already had found their way around the loops since spring are giving rave reviews.

The U.S. Bureau of Land Management began planning the new trails in 2013, two years after Bob Strong, a Spokane hiker, suggested the Fishtrap experience would be vastly more stimulating if a trail system could be established beyond the old ranch roads that had served the previous private landowners.

The “Miller Ranch” had been in Charles Miller’s family since 1871 before he and his wife, Diane, sold the 8,000 acres to BLM for $2.5 million in 1992. Summer cattle grazing is still allowed, as fall hikers will notice as they occasionally skip over the cow pies.

Strong was right. The new trails – the product of more than 4,000 hours of volunteer planning and labor – form two joined loops of 4.9 miles and 5.3 miles. The lead visitors to sites never seen from the road routes. Combining the two loops into a figure-8 route makes an outstanding 10-mile trek for foot, bike or horse.

Of the 446,000 acres in Washington managed by BLM, the Fishtrap Recreation Area is emerging as a natural standout for trails. And it’s just 30 minutes west of Spokane.

Straddling the Spokane-Lincoln county line, the federal land is a textbook example of channeled scablands that flourish with native plants and wildlife some 12,000-15,000 years after being ravaged by a series of violent floods emanating from Lake Missoula during the Ice Age. The centerpiece is 190-acre Fishtrap Lake, perhaps best-known in modern times for its spring-summer fishing season for trout stocked by the Washington Department of Fish and Wildlife.

Fishtrap had long been an attraction for Native Americans who foraged there and used traps to catch fish near the outlet. “That’s the source of the lake’s name,” BLM archeologist Anne Boyd said.

Some of the rock in the area includes a high amount of flint-like materials Native Americans could collect to make arrowheads, knives, spear points and other tools that require a sharp edge, she said. “Natural caves formed during Ice Age Floods were used as rock shelters.”

“I’ve never seen so much wildflower diversity in one hike,” she said at the end of a late-May outing. She also pointed out that islands of golden aspens light up among scattered ponderosa pines during fall.

“You can hike there through November, and I’ve cross-country skied there in winter when conditions allow. There’s so much more to that country that what you see from Interstate 90.”

Indeed, the variety of habitats – wetlands, ponds, lakes, riparian, brush, forest, sage, steppe and grassland have created an outstanding birding spot. Fishtrap is a favorite for native plant groups to visit. Geology enthusiasts know there are mysterious mima mounds to ponder and much more to discover.

Groundbreaking for the new trails began on Sept. 26, 2015, as WTA, the Spokane Mountaineers and Backcountry Horsemen teamed with pulaskis and other tools to celebrate National Public Lands Day with a work party.

“There was some rocky ground to deal with and drainage is an issue in some places,” Weiler said. “Despite the arid look to the area, there are a lot of wetlands with lush growth.”

The biggest problem for trail makers was dealing with the changes to the landscape caused by the Watermelon Hill fire that leaped through 13,000 acres in 2014. “Snags from the fire’s impact on ponderosa pine stands created hazards, especially when the wind blew,” she said.

That hazard lingers in a few spots five years after the fire. “One small area had 11 blowdowns after wind events this spring,” Weiler said.

Now the trails need visits and wear from hooves, fat tires and feet to keep them tramped out and visible. 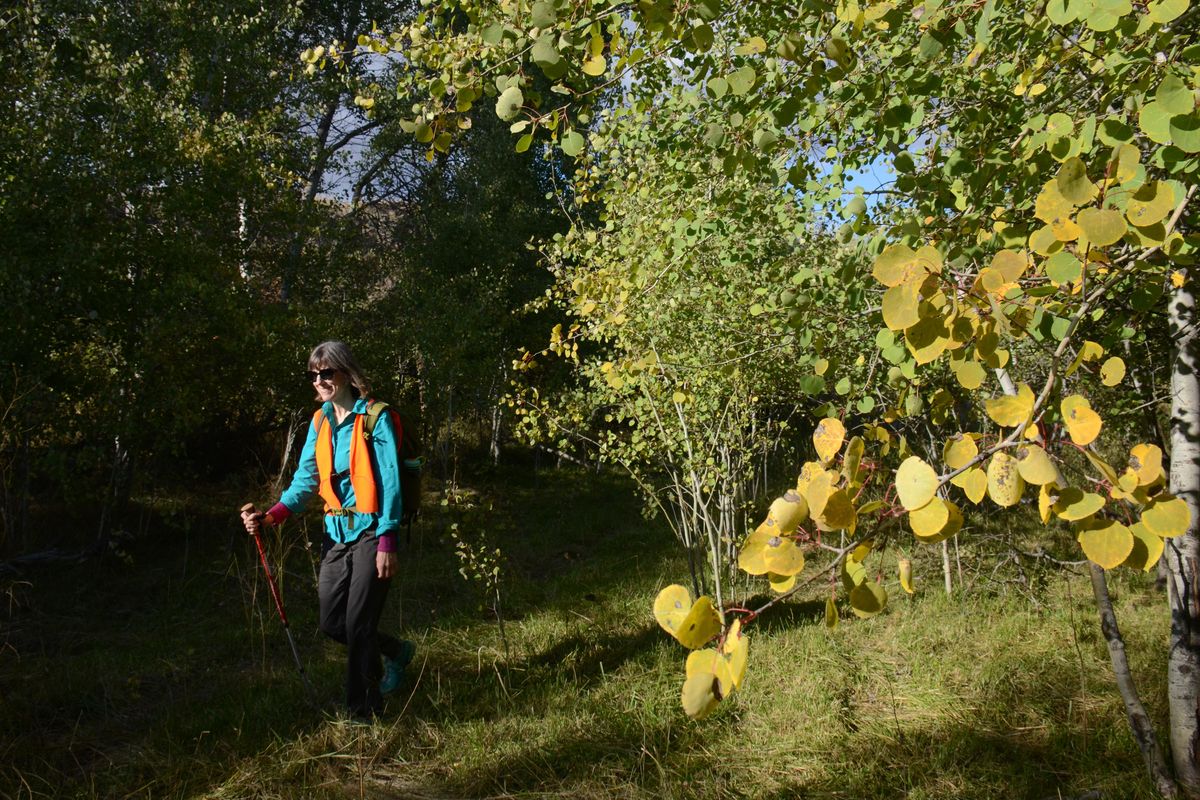 The South Loop is 5.3 miles and 500 feet of cumulative elevation gain that reward hikers with impressive views of the lake, geologic features, wetlands and a break at Farmer’s Landing.

Start through the gate at the northeast end of the parking lot and hike the loop clockwise.

The singletrack trail passes wetlands on the right, rock outcroppings on the left, and goes through the middle of an aspen grove before reaching an earthen stock pond where ducks often rest.

Continue through the gate in the fence and hike up the draw until the trail climbs onto the flat above. At 1.2 miles, bear right on a doubletrack trail coming from the Miller Ranch House trailhead. Go a short way and notice the North Loop trail merging in from the left. Go a short way farther and take the singletrack angling left off the wider trail. The two loop trails share this 0.7-mile segment heading southeast, down off the plateau to a junction (at mile 2 of the hike) on a bluff above The Narrows of Fishtrap Lake.

To do the 10-mile figure 8 loop, go left (north) here. To stay on the South Loop, turn right and hike a scenic 0.2-mile stretch of the bluff with the lake on your left. Watch for cliff swallows and turkey vultures during summer.

The trail makes an S curve away from the lake, goes through fence gate and climbs up to a flat area. Check out the spur trail at 2.6 miles leading left to a scenic point above a cliff that drops to the lake. The crater, big enough to swallow a house on the north side of the spur trail, is a kolk – the erosive result of powerful whirlpools during the Ice Age Floods.

The singletrack heads west from Farmers Landing, through a low, wet area, then merging with a doubletrack that leads 1.7 miles back to the trailhead. The sound of gunfire is common in this stretch from target shooting that occurs nearby.

If water is flowing across the trail in a wetland 0.4 mile before reaching the trailhead, look upstream to the right for boards that enable a dry crossing.

The North Loop is 4.9 miles with 460 feet of elevation gain rewarded with long stretches of wide open views and a trip to the lake’s edge and back.

Go through the Fishtrap Road parking lot gate. Head south on a doubletrack for nearly 0.4 mile and bear right on a singletrack that forks west at 0.6 mile between two pothole craters. Then the trail heads south along an open rim with wetlands on your right. Bitterroots bloom in the gravely areas here in late May.

At 1.9 miles, the route makes a sharp left onto a double track that’s coming from Miller Ranch House. Go a short way south and bear left on a singletrack that’s shared with the South Loop to a junction on a scenic bluff overlooking The Narrows of Fishtrap Lake at 2.7 miles.

To do the 10-mile figure-8 loop, go right (south) here. To stay on the North Loop, turn left and head north with the lake on your right for 0.8 mile before the trail turns left from a bluff and leaves the lake behind. Hike to a junction at 3.6 miles and turn right onto a doubletrack.

At 3.9 mile, be on guard for the singletrack angling off to the left. (The doubletrack will get you back to the trailhead, but the singletrack offers more interesting scenery.)

Climb up to a plateau. At nearly 4.3 miles, bear right onto the familiar trail between two pothole craters and hike 0.6 mile north to the trailhead.