A GRIP ON SPORTS • As we crest the hill, headed for the weekend, let’s take some time out to cover a whole bunch of bumps in the road, shall we?

• Game Seven. No matter the sport, a winner-take-all championship event is always fun. The World Series is at it again, with Game Seven tonight in Houston.

Thus far the road team has won every game, the first time that’s been done in the Series.

So much for home-field advantage.

• Speaking of home-field advantage, it’s really an advantage when the visitors have to dodge bottles of beer and the like when trying to dig a ball out of the corner.

No, were not talking about baseball for this segment. Soccer. And the Sounders’ 3-1 upset in Los Angeles last night. Late in the contest, the LAFC “fans” were tossing everything they could get their hands on at the players. And yet the match continued.

This happened in the World Series once. In 1934, in a game between the Tigers and Cardinals, St. Louis’ Joe Medwick did something the fans took exception to on the bases and the left-fielder was greeted with trash thrown from the bleachers when he returned to the field.

But baseball back then had a living, breathing commissioner. Kenesaw Mountain Landis made a decision. He ordered the umpires to remove Medwick from the then 8-0 game.

Maybe not the right decision, but it was a decision. I’m not even sure the MLS has a commissioner. Certainly not one who would make a controversial decision and suspended a match or something. 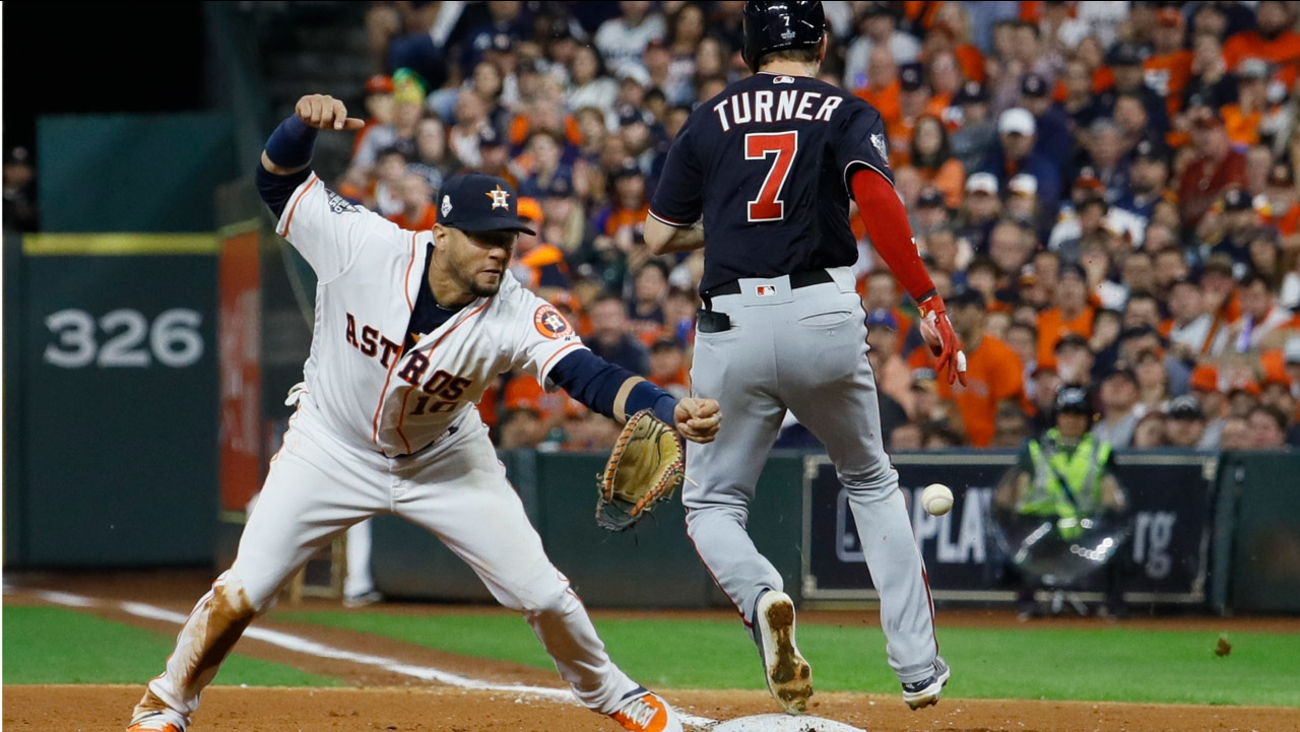 • Hey, let’s go back to baseball. There was another controversial decision last night. Once again, instead of getting a call correct, baseball’s convoluted replay rules just slowed the game down. (After a long replay, word came down it was not unreviewable under the rules. That makes a lot of sense.)

We’re not here to argue whether Trea Turner should have been called out – he shouldn’t have been (no matter what Joe Torre mumbled afterward), considering the ball that he supposedly interfered with hit him while he was taking his last stride to first base, which the rule has always allowed to be in fair territory so the runner can, you know, touch the base – but to point out a solution.

Watch any softball or youth baseball game today and you will see a double base at first. One normal, one (in foul territory) orange. It’s a safety thing. But it also makes calls like the one last night moot. Runners have to hit the orange base there is a play at first. If not, the interference rule is in effect – and easy to call.

• Too bad Turner didn’t just carry his bat down to first base with him. He could have used it to either knock the ball away, trip the first baseman or show up the opposition.

What’s next? If some one hits a home run tonight, do they pantomime their swing over and over as the walk around the bases? It’s a brave new world out there.

WSU: There is no Cougar game this week, but Theo Lawson still has his Pac-12 picks. Hopefully, there will be one wild upset that throws the conference race in disarray. … The NCAA’s decision to move forward, slowly, on the issue of athletes controlling their name, image and likeness, was greeted with pretty much unanimous agreement among area college folks. Theo has more in this story. … Elsewhere in the Pac-12, the NIL issue led to whole bunch of thoughts yesterday, and a lot of folks weighed in on the NCAA’s actions. Or lack of same. … What’s the best game this weekend? Is it Washington at Utah, as the Utes try to stay in the national playoff hunt and the Huskies attempt to get their season back on track? … Or is it in the Coliseum, with Oregon having an opportunity to put another pelt on the wall while USC, nursing injuries just about everywhere, tries to post another upset for beleaguered coach Clay Helton? … It certainly isn’t Oregon State at Arizona. The Beavers just want to win and Arizona is trying out a new defensive coordinator. … The same can be said at UCLA, where the Bruins want to continue their new-found success and Colorado is just looking to play better. … Arizona State is happy not to be playing this week.

Gonzaga: Former GU basketball coach Dan Fitzgerald headlined the newest class inducted into the Inland Northwest Sports Hall of Fame yesterday. He was joined by Cougar quarterback Jack Thompson, high school volleyball coach Buzzie Welch and others. Dan Thompson was at the Arena and has this story. … The women’s basketball team is ready for its season to begin. They have an exhibition scheduled for Saturday. Jim Allen has a preview of that event and a story on Kylee Griffen, who has been lost for the season due to injury. … Larry Weir spoke with Steven Karr for the latest Press Box pod.

EWU: The Eagles still have four games left in the season as they try to get back to .500. The offense may have to take them there, but it’s struggled at times. Ryan Collingwood sat down with offensive coordinator Ian Shoemaker for this interview. … The soccer team will be playing for the Big Sky regular-season title today when it hosts Montana. Ryan has a preview.

Idaho: The Vandals hosted NAIA member Lewis-Clark State last night in an exhibition game. It didn’t turn out well for the home team. Peter Harriman has the coverage of UI’s 88-73 loss. … Missed this yesterday, but Peter had a story on Leonick Tamba, who has been forced to fill-in for one of the Vandals’ best defensive players.

Preps: We have a soccer roundup to pass along this morning.

Seahawks: No more trades. That was the news, or lack of it, from Hawk headquarters yesterday as the NFL’s trade deadline passed. … Up this week is Tampa Bay.

Sounders: With the road win against a team already labeled the best-ever in MLS history, Seattle moves on to the league title match. It will be either in Atlanta or in Seattle, if Toronto wins tonight (this is a correction for a mistake I had a week or so ago – sorry). The Sounders played physically against LAFC and the home team didn’t respond well.

• You can be assured I’ll be watching tonight’s Game Seven. Until it is 11-0 or whatever. It’s happened before. Hopefully, it won’t tonight. Until later …