By Thomas Clouse and Amy Edelen The Spokesman-Review

The lure of a chicken sandwich prompted some hungry Spokane-area residents to sleep in their cars overnight into Tuesday. One man reportedly waited in line 14 and a half hours.

Spokane police used six patrol officers to help manage the rush to the grand opening Tuesday morning of Eastern Washington’s first Chick-fil-A restaurant, which turned the Division Street “Y” into a traffic-snarled mess that more resembled a “Why?”

Luna Thompson, 22, waited for more than 90 minutes before finally inching her vehicle just before noon onto the hallowed grounds of the new Chick-fil-A at 9304 N. Newport Highway.

“I’m pregnant, so I have been craving this for months,” Thompson said as she finally saw the drive-through window. “I hope it’s worth it. I hope it’s as good in Spokane as everywhere else I’ve had it.”

While the signature chicken sandwiches, real lemonade and sweet tea brought out throngs to taste what has made Chick-fil-A one of the fastest-growing chains in America, the family-owned company’s foundation’s past donations to groups that oppose gay marriage has thrust the restaurant chain into a political debate over discrimination. 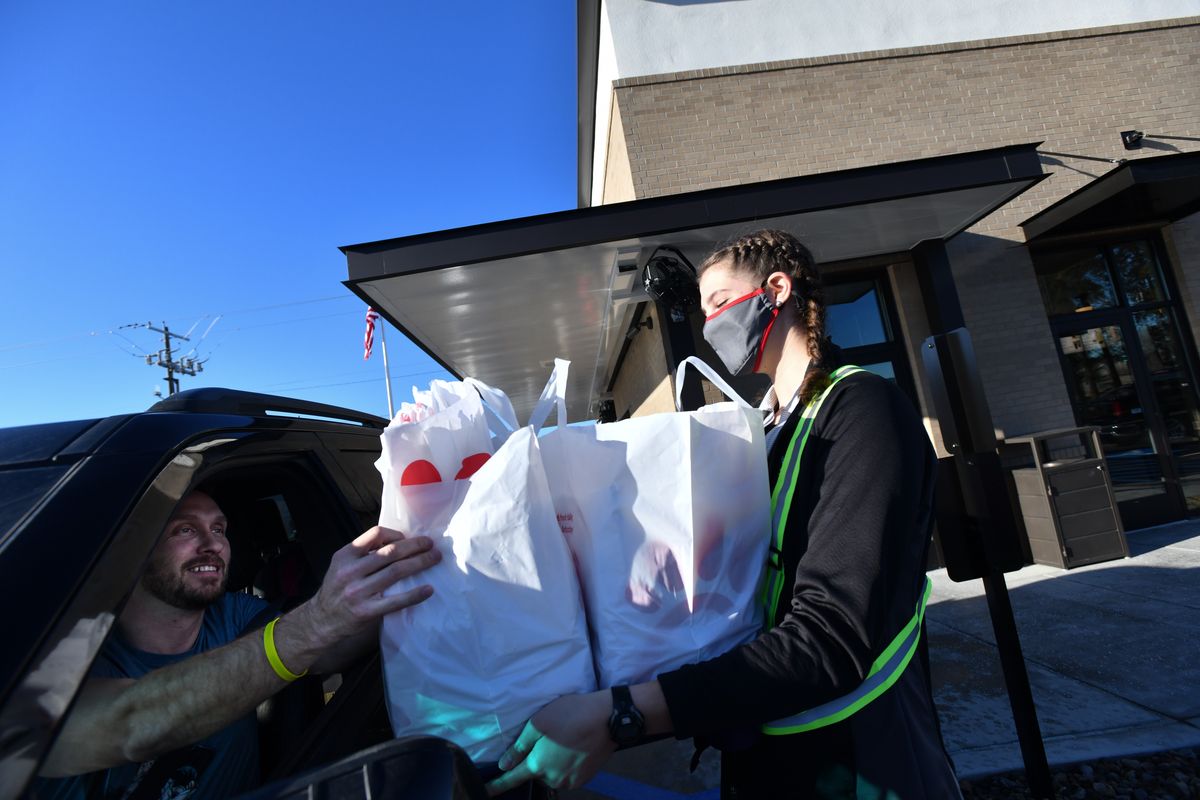 Ryan Heacock, owner of Fellowship Financial Planning smiles as he takes an order of A Chick-fil-A for his staff from an employee who could not be identified due to company regulations after he waited several hours in line on Tuesday, December 1, 2020, at 9304 North Newport Highway in Spokane, Wash. Heacock said they wait was worth it and that he got a lot of paperwork done in the car. (Tyler Tjomsland/THE SPOKESMAN-RE)

At the same time, the chain has thrived to become among the largest in the country.

According to published reports, the Atlanta-based company founded in 1967 sparked controversy when it was revealed that in 2012 the company’s charitable foundation had donated millions to groups that discriminated against same-sex marriage.

“We’re inviting God’s judgment on our nation when we shake our fist at him and say we know better than you as to what constitutes a marriage,” company Chairman and CEO Dan Cathy told a radio show.

Dan Cathy is the son of Chick-fil-A founder J. Truett Cathy, whose Baptist faith was a guiding principle of the business, which in part means its stores are closed on Sundays.

“Corporate Purpose,” the company website reads: “to glorify God by being a faithful steward of all that is entrusted to us and to have a positive influence on all who come into contact with Chick-fil-A.”

The contributions led to boycotts and counter-boycotts. Then in 2019, the company announced that it was shifting its $9 million in corporate donations among three initiatives: promoting youth education, combating youth homelessness and fighting hunger. Those funds were to be distributed to Junior Achievement USA, Covenant House International and local food banks in cities where the chain opens new locations, according to a company news release.

In an interview with real estate publication Bisnow, Tim Tassopoulos, Chick-fil-A’s president and chief operating officer, said the company’s new donation strategy was related to the backlash from the previous donations.

While she was aware of the controversy, it didn’t dissuade Luna, of Spokane, from attending Tuesday’s opening on Division.

“I think I like some of their beliefs. They are a family company,” she said. “I don’t support giving to anti-gay organizations. But, they don’t purposefully discriminate. That’s important to me.”

Despite the backlash caused by the donations, the controversy has done little to slow the rise of the fast-food chain.

The company generated more than $11.3 billion in sales in 2019, surpassing Taco Bell and Subway, according to Technomic.

William Martin, associate professor of finance and marketing at Eastern Washington University, said Chick-fil-A’s success is attributed to its emphasis on quality food, selectivity of where it builds restaurants nationwide and customer service.

The restaurant chain was at the top of the American Customer Satisfaction Index – which measures satisfaction of U.S. consumers – for the sixth year in a row in 2020.

“They are renowned in the fast-food industry for top-notch service,” Martin said. “That’s a big deal.”

Another driving force behind the Chick-fil-A phenomenon is the brand’s ability to forge an emotional connection with its consumers, said Peggy Sue Loroz, professor of marketing at Gonzaga University.

Because Chick-fil-A is selective about the markets it enters, it also creates exclusivity to the brand because consumers won’t find a restaurant on every corner, she said.

“Customers are passionate about the food itself, but I also think it has this aspect of scarcity,” Loroz said. “Scarcity also amps up peoples’ emotions. They think, ‘I can’t always have Chick-fil-A, so I am going to care about it when I can.’ ”

On Tuesday, it appeared a good portion of the Spokane area’s population decided to do just that.

Daniel Russell, the grand opening supervisor at the restaurant, said he was very pleased with the turnout.

“We are ecstatic about the response,” Russell said. “We are excited to be in Spokane. The people are thrilled for us to be here. We are glad to be a light in the community.”

The rush for the opening caused so much congestion that Spokane police sent six patrol officers and a supervisor, Sgt. John Gately said. He reported no major incidents, and the drivers did their best not to block intersections along North Colton Street and East Holland Avenue.

At 5 a.m. Tuesday, traffic was blocked for four-and-a-half blocks as patrons waited for the restaurant to open. Gately said some of the patrons slept in their cars as they waited.

“The first two people in line got here at 4 p.m. (Monday),” Gately said. “One guy waited 14 and a half hours. He said he had nothing going on, so he came to be the first.”

Mike Crandall, construction superintendent with Snohomish-based Corstone Contractors, watched as crowds lined up to enter the building his company just completed. At one point, he climbed on top of the roof to watch the madness.

“I have to be here for the grand opening to make sure nothing falls apart,” Crandall said. “I didn’t know it was going to be quite this big. It’s crazy.”

Senior Airman R.J. Armstrong, 21, who is originally from Houston but is currently based at Fairchild Air Force Base, said he had been waiting more than two hours, all with a sore back, to put in his order.

The plan, he said, was to buy enough orders to last several days.

Armstrong was asked if the wait was worth it.

“I hope so, considering I probably won’t be back here for a month, probably.”