SAN FRANCISCO – Gonzaga hadn’t been in a game like this since digging out an overtime win against Oregon in the Bahamas, but the Bulldogs led that one for 34-plus minutes.

It was somewhat similar to the Washington game, but Gonzaga maintained a single-digit lead most of the way in that road win. The Zags handled Arizona in Tucson before getting sloppy in the closing minutes and hanging on for a four-point win.

The second-ranked Zags were short on bodies – Killian Tillie sat out with a sprained ankle – and had a handful of players in foul trouble. They were outplayed by San Francisco in the opening half and found themselves trailing by one with less than two minutes remaining.

That was plenty of time for Corey Kispert to deliver two of Gonzaga’s biggest baskets of the season as the Zags outlasted the Dons 83-79 on Saturday in front of a packed house of 3,006 – perhaps 40% sporting GU gear – at War Memorial Gym.

“That’s what one of the best players in the country does,” said freshman forward Drew Timme, who had his best game of the season, scoring 19 points. “That was awesome.”

Gonzaga hasn’t been in many pressure situations, but Kispert put his name high on the list of late-game options. He took over in crunch time after USF had scored six straight points to take a 76-75 lead.

On the first play, time was running low on the shot clock when Kispert took at the top of the key. The junior wing knew he was quicker than 6-foot-8 defender Josh Kunen. Kispert drove for a layup and was fouled by Kunen. Kispert’s free throw put Gonzaga up 78-76.

“I knew how much time was left. Any time it gets to 8, 10 seconds and the ball’s in my hands, it’s go time,” said Kispert, who was scoreless in the first half. “I gave him a little jab and went to my right. One of the bigs, I think it was Drew, gave me a good duck-in, and there was nobody at the rim.”

On the next possession, Kispert worked the right baseline and drained a difficult 12-footer over Jordan Ratinho. Admon Gilder sealed Gonzaga’s 15th straight victory with a pair of free throws with 3.6 seconds left.

“I tried to get him up in the air and get fouled, but he was pretty disciplined,” Kispert said. “A little fader from the corner, luckily that one went in.”

Safe to say Kispert’s mom and several of her college friends picked the right road game to attend. 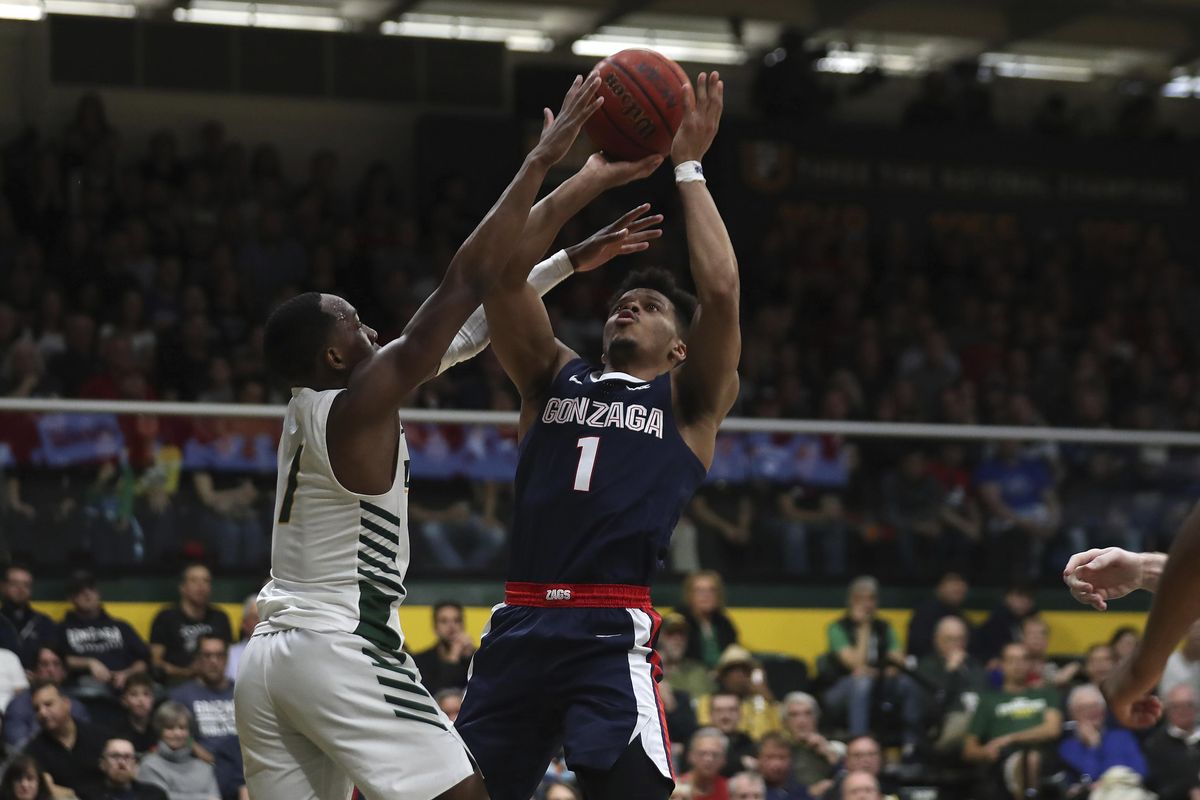 Throughout the first half and segments of the second, it appeared Gonzaga’s streaks were in jeopardy.

The Dons took it to GU’s defense in the opening half with numerous baskets off dribble penetration and timely 3-pointers. The Zags’ offense had success inside with Timme and Filip Petrusev, who finished with a game-high 23 points, but they sputtered with numerous unforced turnovers.

Gonzaga corrected those issues at both ends of the court in the second half and finally moved in front, 51-50, on Kispert’s 3-pointer, ending an 0-for-9 stretch from distance dating back to the first half against Santa Clara.

The Zags would hit three more 3s – two by Joel Ayayi – but the lead exchanged hands until Kispert’s late heroics.

“We needed to work on end-game stuff,” head coach Mark Few said. “It’s great to be able to come in at halftime and be down, make adjustments and have those guys execute those adjustments and turn the tables, because they had us reeling there early.”

The Zags overcame a steady diet of adversity, including four players finishing with four fouls. They trailed for nearly 27 minutes, committed 15 turnovers and struggled to contain the Dons in the first half.

“They’ve been immersed in the Zag culture,” Few said. “They understand that’s what we do. There’s a process to how we win. You play defense and move the ball, and usually when we take care of the ball we’ll get good shots.

“I’m proud of them. We’re low on numbers, low on bodies, low on everything, and we had foul trouble. So it was a very, very good win.”