Return to the Moon

Last spring, the White House directed NASA to put astronauts on the moon by 2024. That would require an enormous increase in the agency’s budget — and at a time when D.C. politics aren’t favorable to more big-ticket items or more requests from the Trump administration. Meanwhile, NASA is recruiting more astronauts to fly its projected Artemis missions and is moving forward on getting a real lunar landing vehicle built.

HOW THEY’LL GET THERE

An Artemis moon landing mission will differ from Apollo in a number of ways. One of the biggest: NASA intends to build a space station in lunar orbit and use that as a base from which it can launch multiple expeditions to the surface of the moon.

WHAT THEY’LL RIDE IN

It’s way too early to tell how accurate the artist’s rendering, at the top of this page, will be in depicting an Artemis lunar lander. Not only has it not yet been built, NASA is still studying proposals on how to design and build it.

On the other hand, the vehicle that will carry astronauts back and forth between Earth and lunar orbit — NASA’s new Orion spacecraft — has been under development by Lockheed Martin since 2004.

The service module — which will carry fuel and oxygen — will be built by German-based Airbus for the European Space Agency.

16.5 feet in diameter, but with 50 percent more volume than an old Apollo capsule.

Designed to “splash down” in saltwater, yet NASA insists Orion will be reusable. 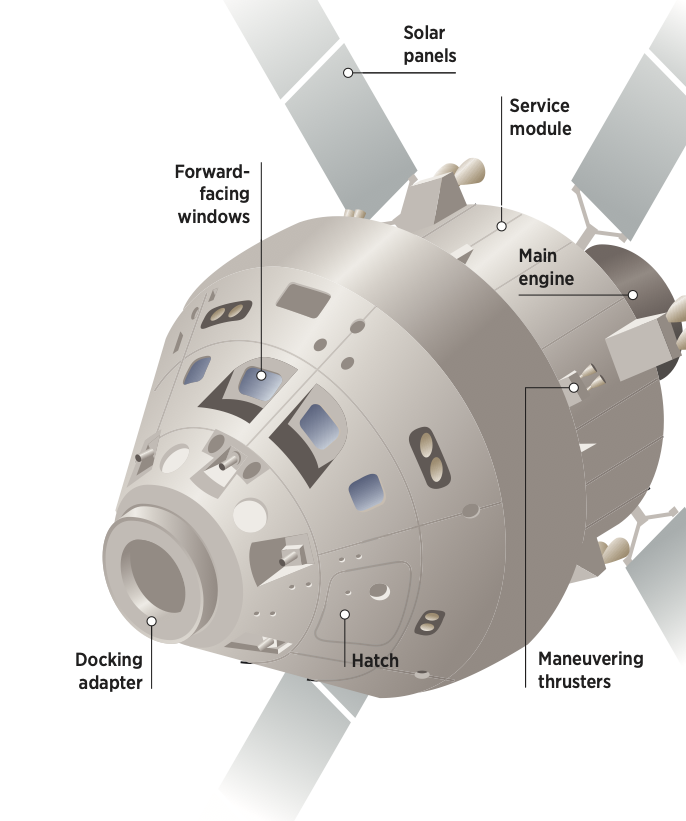 THE TIMETABLE FOR ALL THIS

NASA has announced a schedule that it says it can stick to.

NASA hopes commercial lauch programs by Boeing and SpaceX are up and running so it no longer has to rely on Russia to ferry astronauts to the International Space Station.

NASA hopes to launch its new Space Launch System, or SLS, on an uncrewed test mission.

NASA hopes to launch an Orion spacecraft atop its new SLS for a crewed test flight around the moon. NASA also plans to begin launching, via private contractors, test units for power generation in space to be a part of its new lunar “gateway” station.

The administration has directed NASA to land a crew on the moon — specifically, the lunar South Pole — as a first step toward mounting a crewed mission to Mars.

NASA hopes to establish a sustainable human presence on the moon, gaining expertise that will be required for the upcoming effort to land on Mars.

NASA has backed away from plans to transition all ISS operations to the commercial sector by 2025. NASA is seeking money to keep the station open through 2030.

NASA is under presidential orders to land a crew on Mars by 2033.

Exactly what you’d expect it to be: Money. Developing new technology to get to the moon will be extremely expensive.

The Trump administration released its 2021 budget request last week, asking for a 12% increase in NASA’s budget from the previous year, for a total of $25.2 billion. Also last week, NASA officials said its ambitious plans for Project Artemis will cost an addition $35 billion on top of what it already receives.