But where did it come from?

The three Cougars who sat at the podium after WSU defeated Oregon State 89-76 didn’t have a substantive answer to that question, but maybe the special guests sitting beyond the baseline at Beasley Coliseum helped out just a splash.

“Let’s just give that credit to Klay and Steph,” Bonton said.

“They came into the gym and made the gym hot,” Williams said.

Klay Thompson and Steph Curry, the top shooting tandem in NBA history with 4,290 career 3-pointers between them, were front and center Saturday afternoon as the Cougars took on the Beavers and retired Thompson’s No. 1 jersey during a memorable halftime ceremony in Pullman.

The globally famous Golden State duo came to life every time Washington State connected from deep. A team that had been less than remarkable from 3-point range went 8 of 20, riding a career night from Bonton in bumping its overall record to 12-7 and Pac-12 record to 3-3.

Bonton, a junior guard from Portland, finished with 34 points, shattering his previous high of 19, and wasn’t far off from a triple-double, chipping in eight rebounds and eight assists. He made all 14 of his free throws and was responsible for the play that energized the arena – and both celebrity visitors – right before halftime.

With the clock winding down in the first half, Bonton picked up an inbound pass, maneuvered past a defender, dribbled across the timeline and heaved a 40-footer at the buzzer. Thompson and Curry stood at the edge of the court as the ball sailed through the air and celebrated as soon as it dropped into the net.

“Was it Bonton? He played well tonight, so cool to see a shot like that,” Curry told Janie McCauley of the Associated Press hours later before the Warriors’ game in San Francisco. “Klay was in the building, so something good had to happen.”

Bonton made 4 of 7 from 3-point range, Elleby went 2 of 7 and DJ Rodman was 2 of 4. The Cougars entered the third week of Pac-12 play shooting just 29% from beyond the arc, but they were dramatically improved Thursday night against No. 8 Oregon, making 11 of 21, and didn’t regress against Oregon State. WSU was also impressive from the free-throw line, making 25 of 27. 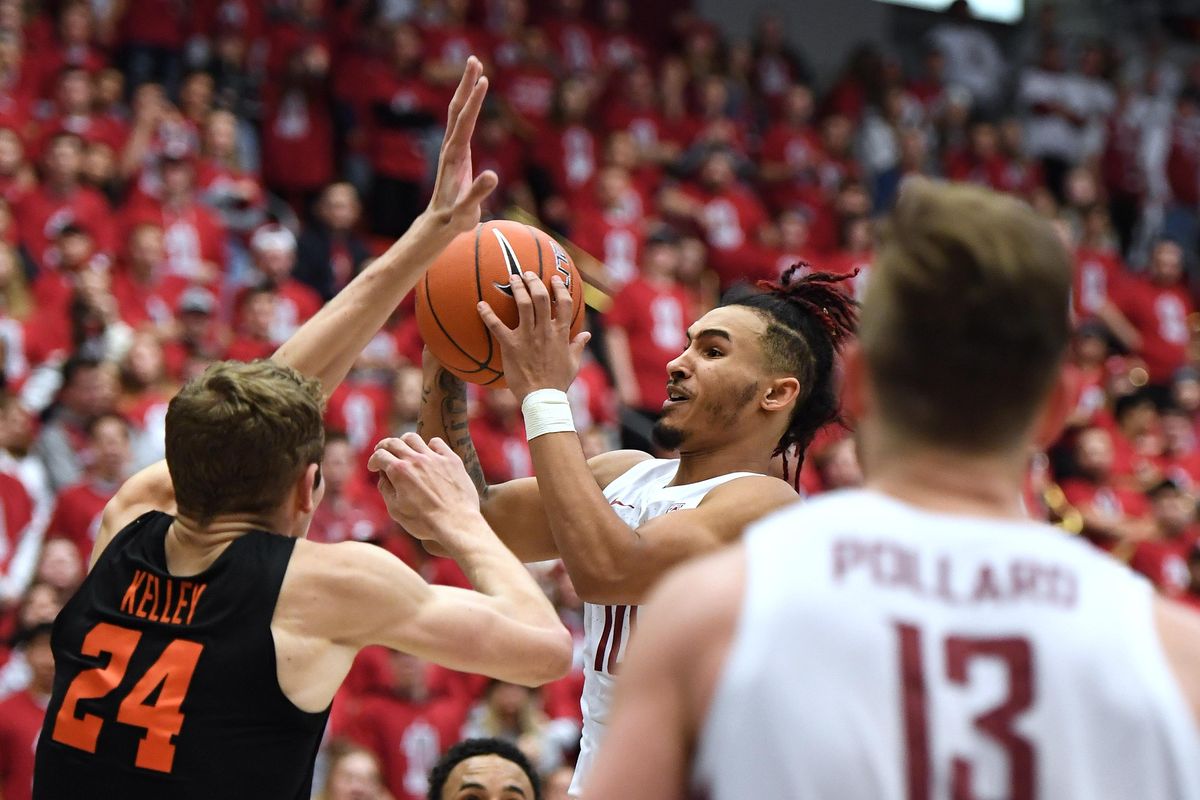 Washington State guard Isaac Bonton (10) heads to the basket during the second half of a college basketball game, Sat., Jan. 18, 2020, in Pullman, Wash. (Colin Mulvany / The Spokesman-Review)

The buzzer-beater from Bonton opened up a six-point lead at halftime. Although the Beavers occasionally cut it to a single possession, they never took the lead again.

Bonton hit another 3, giving the Cougars their first double-digit lead, and turned in another highlight with 4:15 to play, stealing Ethan Thompson’s bad pass and flicking a pass behind the back to Elleby, who finished the fast-break layup while drawing a foul.

“It didn’t surprise me,” said Elleby, who backed up Bonton’s 34 points with 22. “He gets the ball everywhere on the floor with all kinds of passes, and tonight he just played spectacular. Whenever the ball was in his hands, I knew something special was going to happen.”

“I know whenever I get the ball, I’ve got two guys right here that run the floor like crazy, and it’s bound to be a highlight play whenever I flip it back to them,” Bonton said. “So whenever CJ’s trailing, it just comes naturally just to flip it to him. He’s strong, finishes with contact and got the and-one. That was big for us.”

Elleby rounded out his stat line with a game-high nine rebounds and five assists. Williams, the freshman guard from Seattle, had 17 points, four rebounds and three assists.

Oregon State’s Tres Tinkle, a Pac-12 Player of the Year candidate, finished with 22 points but went 0 for 4 from 3-point range on a night the Beavers were just 2 of 13.

WSU head coach Kyle Smith said he wasn’t sure how his team would handle the distractions Thompson’s jersey retirement brought. The former WSU star showed up to the team’s practice Friday and players gestured to Thompson after various highlight plays – often getting a fist bump or a high five from the five-time NBA All-Star.

Vince Grippi: Nearly a decade after leaving Washington State, Klay Thompson proud as ever to be a Cougar

For Klay Thompson, whose No. 1 jersey will now fly in the Beasley Coliseum rafters for perpetuity, it seems like only yesterday he was wandering the Pullman streets, enjoying the nightlife, helping to fill Beasley Coliseum and banging the drum for Washington State. | Read more

“Our guys really handled it well,” Smith said. “We barely practiced yesterday because once he showed up, practice was basically over. But our guys were really pumped. Certainly wanted to please him, and all the kind things he said about his experience here were great. Great for recruiting. Great for everything.”

The Cougars surpassed their win total from last season, snapped a four-game home skid against OSU and enjoyed their first home weekend sweep since beating USC and UCLA in 2013.