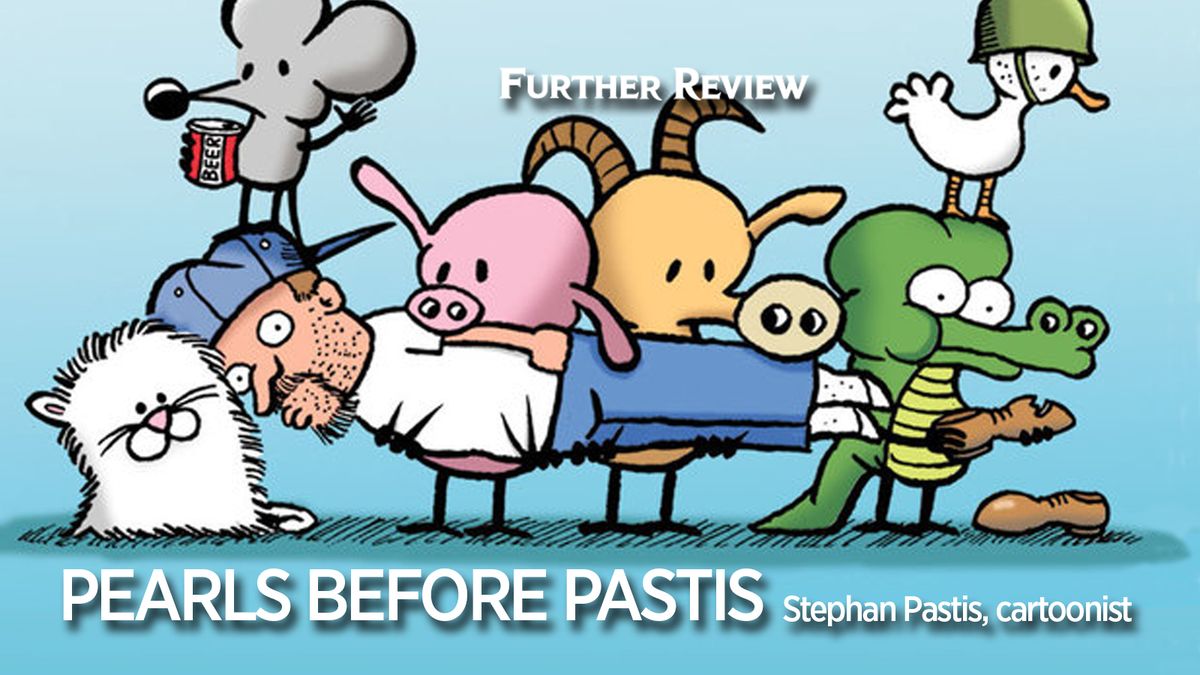 Stephan Pastis chucked a nine-year career practicing law in California to draw a pun-filled comic strip starring a pig, a rat and a goat and, more recently, to launch a series of successful “illustrated middle-grade” children’s books. Here’s a look at the master of daily comic strip puns:

The life of Pastis

1989
Graduates UC Berkley with a degree in political science.

1993
Begins working as an insurance defense litigation attorney in the Bay Area.

May 20, 2019
Wins Reuben Award: Cartoonist of the Year from the National Cartoonists Society

Pastis’ work features an antisocial rat, a naive pig, a philosophical goat and their perpetually baffled writer, whom the characters blame for their off-kilter punchlines. In this example, “(this is) how I get around being censored,” Pastis says. “By introducing the comic strip censor.”

A big part of that comedy is the version of himself Pastis puts into his strips. Rat, especially, likes to blame Pastis for what he considers subpar punchlines. Pastis nearly always portrays his fictional self as a loser. He does that because “someone who succeeds in life isn’t funny,” he says. “Funny is someone who suffers more than you.”

“It’s the touchstone of comedy,” Pastis says: “Laurel and Hardy. Chaplin. Charlie Brown. Mike Doonesbury. Calvin. Opus. The central casting of any comedy has to be a loser.”

Another big factor in Pastis’ work are puns. “It’s just the way my brain works,” Pastis says. He says he tries to think of a quote that everyone will know – in this next example, he riffs on the national anthem.

He says he once did a riff on the old Franklin Roosevelt quote, “We have nothing to fear but fear itself,” but then he lost 50% of his readers, who didn’t get the reference. Another time, he quoted Bruce Springsteen’s “Born to Run” and lost about 60%, he says. His puns are “loved by some, hated by many,” Pastis says.

Also, notice that some of these strips Pastis sent us to share with you are black-and-white and some are color. He says he colors his own Sunday strips but draws black-and-white for daily strips. Those are colored by the syndicate for papers that run them in color every day.

Staying topical can be difficult, given Pastis’ deadlines: His syndicate requires him to work six weeks out on daily strips and eight weeks out on Sunday strips. “If I fall behind, there are big fines,” he says. It is possible for him to substitute strips in and out of what he’s turned in.

In the case of this example: “How I wish I was in Colombia at the time,” Pastis says.

In June 2014, “Pearls Before Swine” ran a three-day series of strips in which his cartoon alter ego turns over the strip to a second-grader who thinks she can draw better than he. So she does. Mostly because the panels she draws were actually drawn by retired and famously reclusive “Calvin and Hobbes” cartoonist Bill Watterson.

Pastis says he went to a lot of trouble to keep the collaboration secret until after the sequence had run. He finally got to meet Watterson a couple of years later and found him to be terrific. “There is no Calvin and there is no Hobbes,” Pastis says. “The closest you’ll ever get to meeting them is by meeting the cartoonist. It’s all in his head.”

Pastis has been critical of comic strips that remain in newspapers long after their lifetime should have ended. But when will he end “Pearls”? “Before it gets stale,” he says. He’ll keep it going “as long as I’m excited by it – as long as it makes me laugh.”

Rob Curley, editor of The Spokesman-Review, will interview Pastis via livestream Thursday starting at 2 p.m. You’ll be able to submit questions via a form on the site: spokesman.com/bookclub/livestream/