“Our whole parish has always been very energetic, and we find a way to carry on, regardless,” said 86-year-old Carol Kerley, who has attended the church for decades.

St. Charles Catholic School was set on fire last month, causing significant damage to the rectory and school offices, along with smoke damage to the sanctuary. A suspect was arrested for the arson just a few days later.

Rev. Esteban Soler was determined to hold Easter Mass, even if it could not be in the sanctuary. So with help from the Diocese of Spokane, they devised a plan to hold the service outside in a large tent. 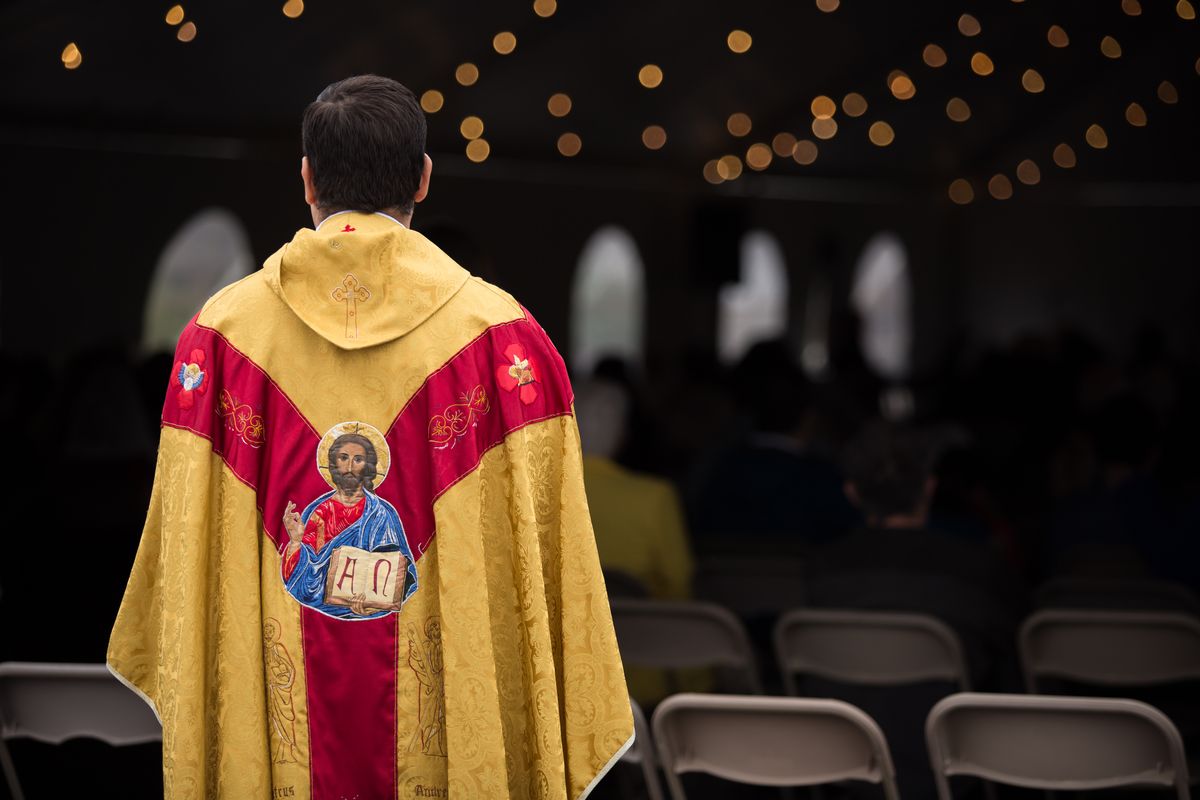 Rev. Esteban Soler looks on prior to beginning the Easter Sunday Mass in a tent outside of St. Charles School on Sunday. The school suffered major damage from a fire that was allegedly arson last month but was able to rise above the challenges and hold a full service for Resurrection Sunday. (Libby Kamrowski/ THE SPOKESMAN-REVIEW)

Ahead of the service, parishioners waved and greeted each other. The Kerley family, led by Bill and Carol, took up nearly three rows with their children and grandchildren.

Carol Kerley taught art at St. Charles for more than four decades, and now some of her grandchildren even attend the school.

“I know half of the people here because I taught them when they were this big,” she said as she gestured down with her hand.

The tent was set on the blacktop behind the school where, decades before, Carol Kerley had her students paint a colorful map of the United States as part of a geography lesson.

When Carol Kerley heard about the fire, she was in “disbelief,” she said. The history of the church, built in the 1950s, is very important to her because it weaves through her own personal and family history.

The timing of the fire was also difficult in the midst of the COVID-19 pandemic, and just days after Soler returned from spending time with his family in South America.

All of those factors made Sunday’s Mass even more sweet for the Kerleys, Carol Kerley said.

“We’re making good out of this whole thing,” she said.

Nearby, Mary Kay and Jim Rogers sat with their family. The excitement to be at Mass was clear on their faces.

Mary Kay Rogers and her seven siblings attended St. Charles, then when she and Jim had children, they sent them to St. Charles. Now, some of the couple’s grandchildren attend school there, Mary Kay Rogers said.

The two were “heartbroken” when they heard of the fire, Mary Kay Rogers said. They love the church because all of the “old timers” still attend and they all know each other, she added.

Coming back together for Mass on Sunday was an “awesome” showing of resilience, Mary Kay Rogers said.

When Connie Smith began teaching English and literature at St. Charles earlier this year, she had no idea how challenging the school year would be. The fire was shocking, Smith said but the “outpouring of support” made it bearable.

“We did not feel abandoned or alone,” she said.

Smith attended Mass with her husband, Ron, and their family. The service was “really special,” Ron Smith said, because it was a chance to “reunite as a community.

As the service drew to a close, Soler greeted parishioners with a huge smile. As parishioners chatted about the Gonzaga University game the night before and their Easter plans, there was a palpable joy of people coming together.

Two little girls bounced out of the tent in their Easter dresses, off to continue the celebrations. One yelled to the other, “Are you going to have an Easter egg hunt?,” drawing laughs and smiles from the crowd around them.