Have you used your time at home to tackle a project you've always wanted to do, but didn't have the time? Built bookshelves? Created a chicken coop? Completed a room renovation? Learned a new skill? We want to hear about it. Contact Cindy Hval at dchval@juno.com.

Like many of us during the pandemic, Cheney High School teachers Jay and Julie Martin had to adapt to working from home.

“It was so hard to learn to teach from home,” Julie Martin said. “By late April we were going stir-crazy.”

But being stuck at home spurred their imaginations and led to a magical project their grandchildren and guests enjoy. They created a series of gnome homes and tucked them throughout their 5-acre property in Cheney. 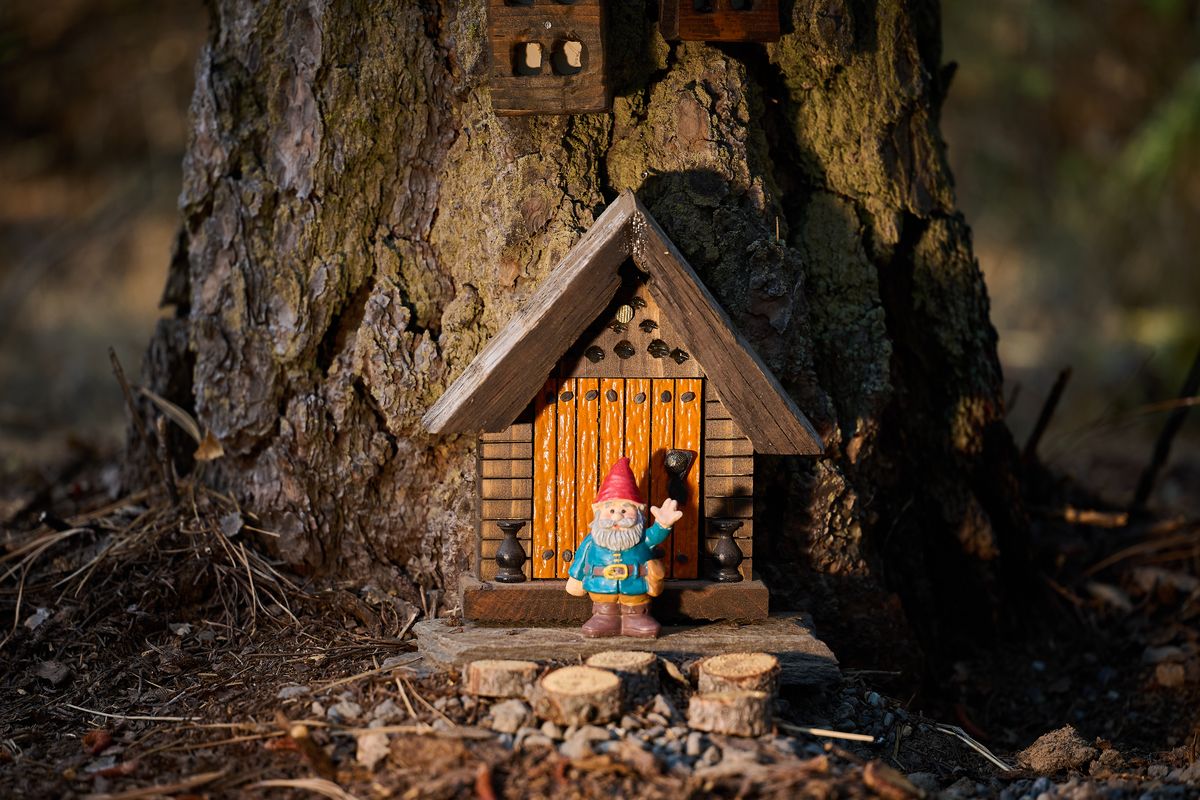 One of nine Gnome Homes the Martins have created and placed along the pathways on their property near Cheney, Wash. (Colin Mulvany/THE SPOKESMAN-REVIEW)

It started with a single gnome Julie’s parents brought with them when they moved back to the area.

“Our granddaughter, Ameline, carried it around with her, so I asked her, ‘Have you found his home yet?’” Julie recalled.

She hadn’t because his home didn’t exist yet.

Julie and Jay Martin sketched plans, and then Jay took them to his 93-year-old father’s woodshop.

“They like to be creative in the woodshop,” Julie Martin said.

Jay Martin returned with a small wooden door and a couple of tiny windows. Then they scouted for the perfect backyard tree for their first gnome home.

The next time Ameline Martin, 6, visited, Julie Martin sent her out to discover it.

“I watched from the window as she found it,” Julie Martin said. “She yelled, ‘I found the door and some windows!’”

The Martins had so much fun they came up with more designs for additional gnome homes. Jay found inspiration in movies. A round green door with a working knocker resembles a Hobbit home. A series of doors bedecked with Union Jack flags pays tribute to Grandpa Potts’ shack in “Chitty Chitty Bang Bang.” The doors stretch between two trees.

Even the Grinch gets a nod.

“I paused the movie to see his front door,” he said.

The resulting gnome home is tucked within a stack of large rocks, the only home not nestled at the base of a tree.

“I used wood from oak barrels for some of them,” Jay Martin explained. “All the wood we used was scrap wood.”

He enjoyed adding details like glow-in-the-dark paint on some windows.

“So it looks like someone is home at night,” he said.

Julie Martin created a “Gnome Home Roam” map to help guests find them all, and as word of their creative endeavor spread, gifts of tiny accessories came their way.

On Friday, Ameline led the way, map in hand, pointing out each home. She demonstrated the knocker on the Hobbit door and showed the red and white scarf draped near the Grinch’s door.

She knelt beside a gray door with a gnome resting next to it.

“He has a pet butterfly,” said Ameline, gently touching the decorative blue and white butterfly anchored nearby.

For her, the most fun has been working in the woodshop with her grandfather.

She pointed out her design in her grandparent’s backyard.

“I wanted it to blend in with the tree so it would be hard to find,” Ameline said. “And I wanted the door to open.”

So far, the Martins have created nine gnome homes, but Jay has ideas for more.

They’ve both enjoyed watching their grandchildren discover the doors and bringing their friends over for a “gnome home roam.” Even adult guests have gotten into the spirit.

“It’s all about the imagination – wondering what’s going on inside the tree,” Julie Martin said.

Cindy Hval can be reached at dchval@juno.com.