The closer you get to Ridgeline High School, the better it gets.

To passing motorists on Interstate 90, it may look like a squat brown building that belongs in an industrial park.

However, Ridgeline – the first new high school in Spokane County in 24 years – is so much more.

Built in a valley east of Barker Road, it already seems a perfect fit.

The campus is sprawling, yet sits a respectful distance from neighboring homes. Outside, the tennis courts are open to the public.

A new track encircles the turf football field, where the Ridgeline Falcons expect to play next month.

Inside, long hallways of tile and vinyl lead to dozens of classrooms in varying states of readiness. Teachers were already at work this week, prepping their new digs.

Microscopes sat in rows on a window sill in a science classroom, beckoning for curious eyes and minds.

“Now all we need are some students,” said Principal Jesse Hardt, dressed in school colors of green and white as he led a tour on Tuesday.

They’ll be there soon enough.

The Central Valley School District academic year begins on Sept. 8, when Ridgeline will welcome about 950 students. Most will be freshmen and sophomores, plus a few juniors who opted in rather than remain at the district’s other two high schools, Central Valley and University.

Seniors will finish the year in their current buildings.

It’s no small feat for a district to expand from two high schools to three, Superintendent Ben Small said as he walked alongside Hardt.

To ease the transition, the district also gave families the option of allowing their younger high schoolers to remain at CV or U-Hi with older siblings, even if they live in the Ridgeline attendance area.

“That transition plan has helped a lot of families plan early on,” Small said. “But many of them are coming here anyway.”

It’s easy to see why.

Ridgeline is 241,000 square feet of shiny newness and the first new high school in Spokane County since Mt. Spokane was built in 1997.

Financed by a capital bond passed in 2018, the new school cost $96 million.

“We were very happy with our bids,” assistant superintendent Jay Rowell said. “It was a huge win for our district and our kids.”

Just beyond the main entrance is the school commons and cafeteria. Capacity is 800, or about half of how many students will eventually go to Ridgeline.

Rowell points to the ceiling, where light-toned wood contrasts with dark brown walls and off-white vinyl. Functional and understated, it was designed by ALSC Architects of Spokane.

Long hallways radiate from the commons and lead to eight wings, somewhat like Ferris High School’s remodeling in 2014.

“I thought about getting a Segway,” said Hardt, only half-joking.

For teachers reluctant to take a hike, ALSC designed a staff-only staircase that connects the second floor to the administration area.

However, the long walks are rewarded with stunning views of the hills, and yes, ridges on three sides. At one point, a bird streaked by the window. It could have been a falcon, everyone agreed. 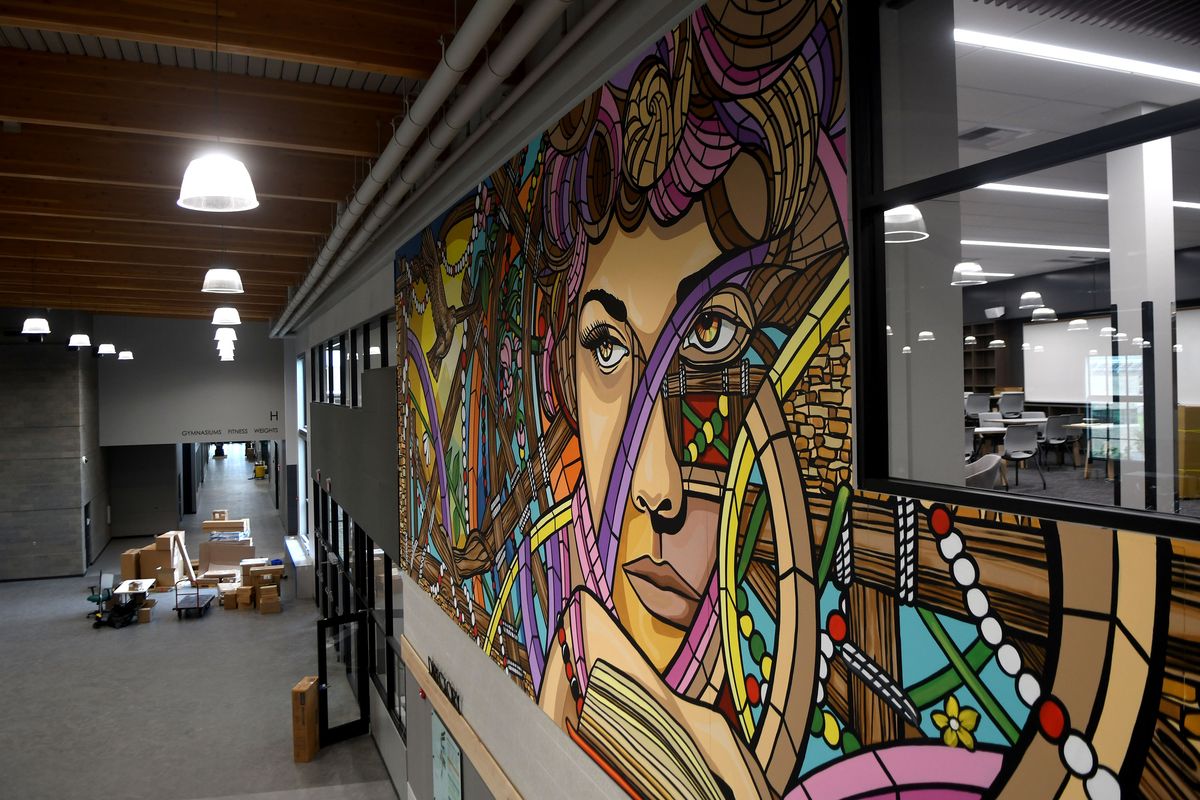 A mural overlooks the cafeteria and commons at Ridgeline High School in Liberty Lake. (kathy plonka)

Hardt has the reins at Ridgeline after 11 years as principal at Horizon Middle School. He’s been on the ground floor for more than three years, assembling a staff, and purchasing equipment and supplies.

“It’s been a process,” said Hardt, who also helped facilitate branding and naming. On Tuesday, he wore a green shirt with the school’s Falcon logo.

The school has 28 general classrooms, science rooms, a performing arts theater and a library. In addition, career and technical education spaces are provided, including project rooms, makerspaces and a Family Consumer Science Center to house a culinary program.

The new gymnasiums are designed as multi-use spaces to serve health and fitness classes, athletics, community events, school presentations and act as a meeting area for the entire school.

Like everything else, the gymnasium is squeaky-clean, with a scent of new varnish and no trace of a skid mark. It holds almost 2,500 people.

Hardt can’t wait for the day when those stands are full. It could happen this year.

“We’re going to have a full varsity schedule for all sports,” Hardt said.

As Hardt led the tour, workers were unpacking boxes and applying finishing touches. The auditorium is still a work in progress.

Workers were busy Tuesday throughout the building, especially in the auditorium.

“We still have a lot of work to do there,” Hardt said. However, the 600-seat venue will come complete with top-notch acoustics and an orchestra pit .

The library is almost complete. With a feel that is both collegiate and collegial, it might be Hardt’s favorite space.

Light-colored wooden shelves surround the space, which is dominated by café-style tables in the center. A lounge area at one end looks out to a picture window with a view of the hills.

“Hopefully that will make students be more likely to pick up a book,” Hardt said.