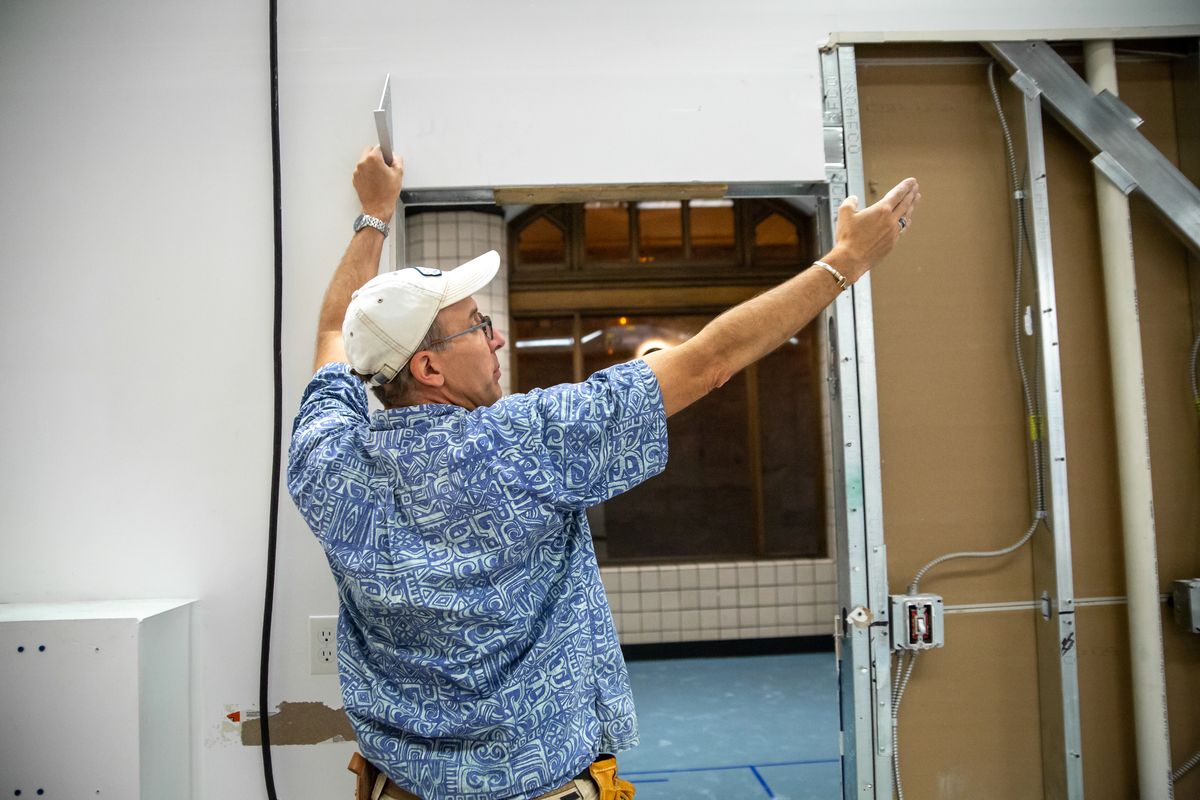 Sean Owens points out areas where features of the future Common Language Brewing Co. will be, as seen in the Chronicle building on Aug. 13, 2021 in downtown Spokane. Owens is hoping to open the brewery with his five business partners in late fall or winter, with a timeline that rests on factors in the supply chain for brewing equipment. Owens would like to incorporate people of color, women and other diverse populations into the brewery’s operations and make it a place where underrepresented groups also feel comfortable to meet and have a beer. (Libby Kamrowski/ THE SPOKESMAN-REVIEW)

A space that was once home to the Spokane Daily Chronicle’s newspaper presses will soon gain new life as a brewery.

Sean Owens, – a former veterinarian and retired professor from the University of California, Davis School of Veterinary Medicine – and five business partners have leased a 3,500-square-foot, first-floor space at 926 W. Sprague Ave. in downtown Spokane.

Owens aims to make Common Language Brewing Co. a welcoming and inclusive place that supports career advancement of women, people of color and the LGBTQIA community in the craft beer industry.

“Obviously, we want to make great beer, but also be an agent for change and diversity in the profession,” Owens said. “We also want to be a research place for students to train how to make beer.”

The brewery plans to donate a significant portion of sale proceeds to organizations that support women, children and BIPOC – Black, Indigenous and people of color – communities, he added.

Williams began her brewing career at Jester King Brewery in Austin, Texas. Most recently, she was production manager of the barrel-aging program at Modern Times Beer in San Diego.

“She’s a guru and artist when it comes to mixed fermentations like farmhouse ales, sours, barrel-aged porters and stouts,” Owens said.

Owens served as a professor, associate hospital director and associate dean of admissions and student programs at UC Davis School of Veterinary Medicine for more than 15 years prior to retiring and becoming a brewer at 3-Mile Brewing Co. in Davis, California.

Owens, who has been homebrewing for several years, completed the UC Davis master brewers certificate program this spring.

“Between (Williams) and I, we have a good mixture of our favorites. Everyone that comes in will find something they like,” Owens said. “We are looking forward to exposing people to beers they’ve never experienced before.”

The brewery will serve appetizers, such as chips and salsa, and hummus with pita bread.

Patrons, however, will be allowed to bring in meals from surrounding restaurants, Owens said, adding he’s hoping to collaborate with eateries to feature their QR codes on the brewery’s menus for delivery service.

Owens and his wife, Dori Borjesson, moved to Pullman last year after she was hired as dean of Washington State University’s College of Veterinary Medicine.

Owens and the brewery’s cofounders initially considered launching the brewery in Pullman, but couldn’t find a space to meet the needs of the business, he said.

After Doug Byrd of Byrd Real Estate Group showed Owens the space in the Chronicle Building, he knew it would be a perfect fit.

“It was phenomenal,” he said of the space. “Everything came together. As much as we like Pullman, the best thing for me and the overall enterprise is to be in Spokane.”

The building is owned by Cowles Real Estate Co. a subsidiary of Cowles Co., which also publishes The Spokesman-Review.

Owens said he’s coming full circle with the space in the Chronicle Building. Prior to his veterinary career, he obtained a bachelor’s degree in journalism from Temple University.

Renovations to the space include removing a large section of wall to make way for brewing tanks and equipment, remodeling the bar area and installing historic-looking copper lights and details.

Owens is adding an event room and planning to wrap the exterior windows with placards highlighting the history of the Chronicle Building.

“We want the space to be engaging,” he said.

Owens is planning to open the brewery by November.

“We’re excited to be a part of the community where people are coming to downtown Spokane, having a good time and enjoying great products made in Eastern Washington,” he said.

This article was updated Aug. 24 to reflect the correct job title of Alex Williams at Modern Times Beer.