Of any defense that knows the difficulties of containing Eric Barriere, it is the Eagles’ own group that knows it best.

Barriere’s excellence – and the strength of Eastern Washington’s entire receiving corps – was on display during EWU’s first official scrimmage of the preseason Wednesday at Roos Field in Cheney.

“What we did well today was make (plays) more difficult for him,” junior defensive end Mitchell Johnson said. “Obviously if he was a normal quarterback, he probably wouldn’t have made as many plays as he did because we did get some good pressure on him, and we got

some good rushes from a lot of places.”

And anyhow, Johnson said, “Even when the defense gets their butts kicked, it’s still fun to see the offense do well.”

Barriere connected with fellow senior Talolo Limu-Jones for a 66-yard score on the first drive and followed with a 76-yard touchdown throw to sophomore Freddie Roberson the next time the first-team offense took the field.

The offense had anticipated the defense would play aggressively against their bubble screen passes, Roberson said, so the play was for him to fake short and go deep. “We know they like to get greedy on those bubbles,” he said of his touchdown. “We just took advantage of that and shot the gap. And I … decided to just run. Run and not look back.”

Barriere, who finished second in the Walter Payton Award voting last spring, finished 11 of 14 for 233 yards and three touchdowns.

“He’s got the keys to the car, and he drove it pretty fast today,” Eagles coach Aaron Best said.

Yet that came against a defense that wasn’t entirely fully stocked, with a handful of regulars held out as a precaution, Best said.

Johnson, too, pointed out that the defense made strides. In a scrimmage of about 90 plays, the defense had six sacks and four pass breakups.

The first-team offense and defense started the scrimmage, and from there the second- and third-team units rotated in against their counterparts during the scrimmage. The offense scored six touchdowns and added four field goals.

Sophomore Simon Burkett completed 5 of 8 attempts for 105 yards, including a 47-yard touchdown to freshman tight end Messiah Jones late in the session. Junior Gunner Talkington, who backed up Barriere last year, completed 5 of 7 passes for 88 yards.

None of the Eagles’ five quarterbacks threw an interception.

Best said offensive coordinator Ian Shoemaker was aggressive in his play-calling, and he praised the depth the team has at wide receiver. Fifteen different players caught passes for the Eagles, who racked up 24 catches for 465 yards.

Last season, Limu-Jones led the Big Sky in receptions and receiving yards per game. Roberson ranked in the top five of both categories as well; junior Andrew Boston was in the top 10.

“Our guys are gonna make plays when they’re there to make,” Best said, “but on the other side of things, we need to look at where we are personnel-wise schematically to make sure that we’re in good or better position to make plays in the end. But again, when you

have a talented receiving corps, guys who have a ton of experience, they’re gonna take advantage of a lot of defenses, not just our own.”

While Barriere and top receivers return from last spring’s 5-2 team, the Eagles’ running game will be without its top returner, senior Tamarick Pierce, who is out indefinitely with an injury. The redshirt senior ran for 462 yards on 86 carries last season.

With senior Dennis Merritt withheld from the scrimmage on Wednesday, true freshman Tuna Altahir led the Eagles in rushing with 13 carries for 77 yards and a touchdown. Davante Smith, another true freshman, added 49 yards on five carries.

“Both (Smith and Altahir) are gonna be really good at the end of their careers, and we’re better if they’re better sooner than later,” Best said.

The intrasquad scrimmage was the first the Eagles have held so far this preseason, and they will hold another next Wednesday. Eastern opens its season at UNLV on Sept. 2. 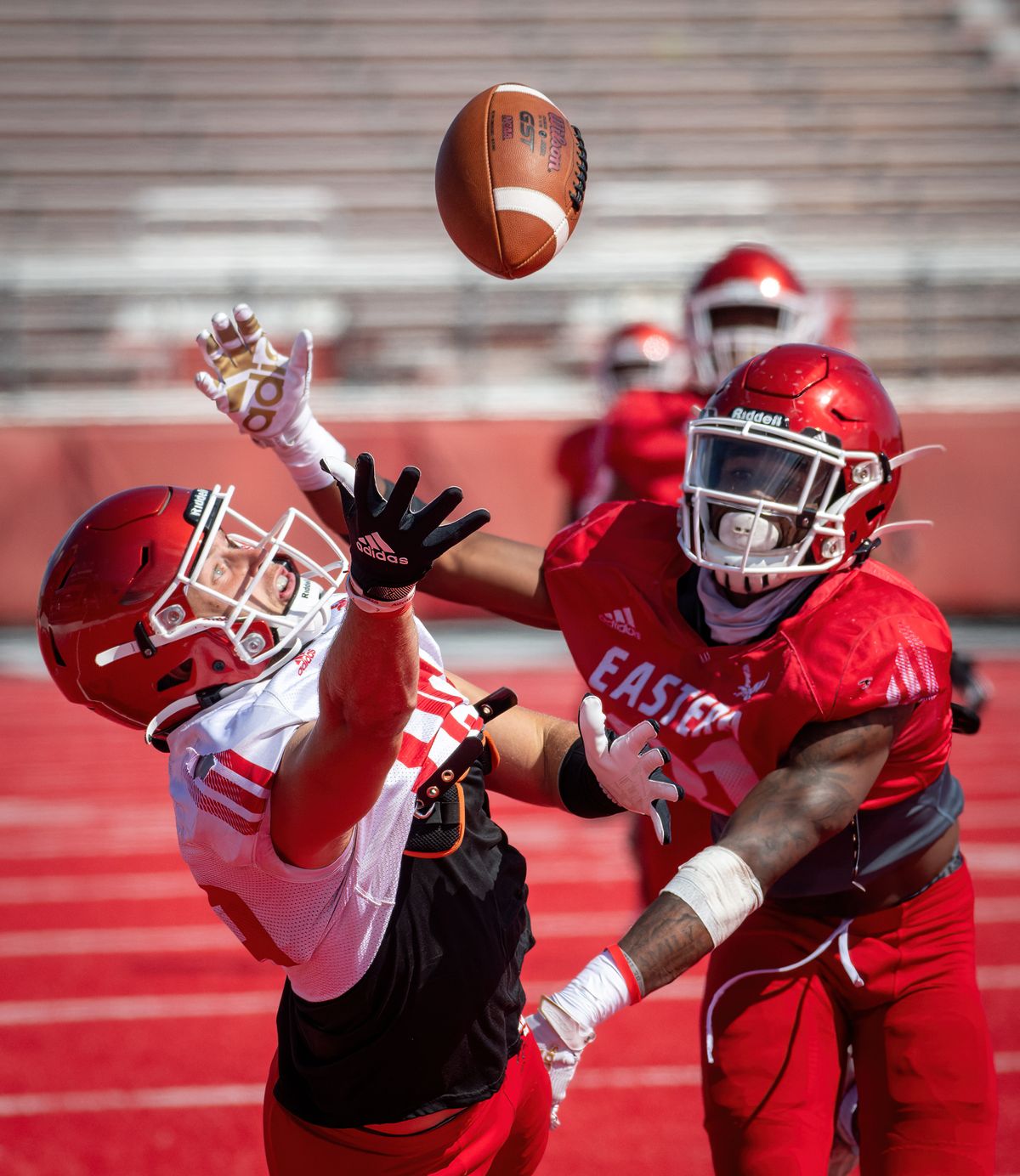