TEKOA, Wash. – As students returned from recess Tuesday morning at Tekoa Elementary School, one of the boys had clearly forgotten something.

It was as clear as the nose on his face.

“Your mask,” a girl reminded him in a voice that was friendly but firm.

The boy, perhaps 8 years old, plucked a cloth from his pocket, slapped it on his face and all was well.

That’s how it’s been for more than a year in the Tekoa School District, where people have one another’s faces as well as their backs.

They also have a singular goal: to keep their kids in school. 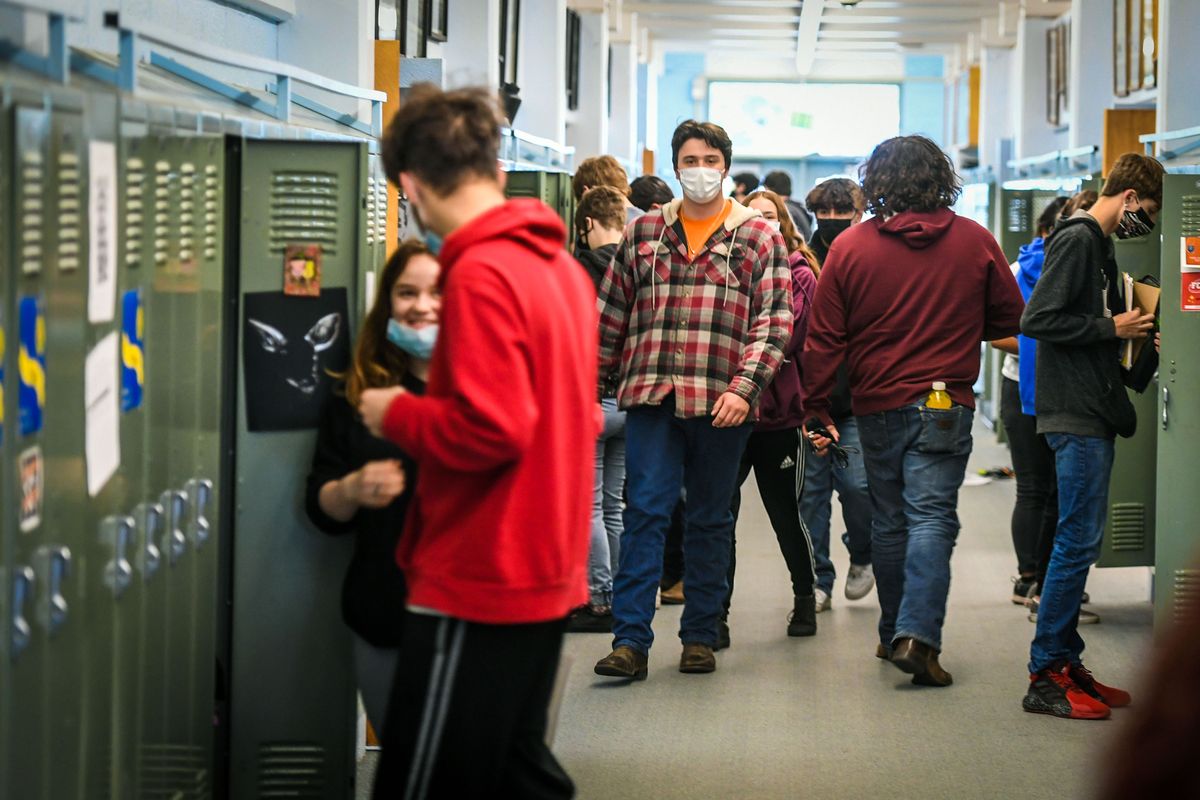 Tekoa High School students gather in the hallway before heading to classrooms to take final exams Tuesday. The Tekoa School District taught students in person in school all year with no reported in-school transmission. (Dan Pelle/THESPOKESMAN-REVIEW)

Mission accomplished: Almost alone among districts in Eastern Washington, the small district based in northeastern Whitman County has managed to keep its 191 students “in class where they belong,” Superintendent Mark Heid said.

The district has endured its share of coronavirus outbreaks, resulting in a couple of weeks of remote learning at both the high school and the elementary.

However, thanks to careful planning, hard work and emphatic support from families, the new normal at Tekoa looks much like the old.

For high school Principal Dan Hutton, it was a good way to cap a 34-year career at Tekoa.

“I was so pleased, impressed, honored that everyone said, ‘We’re going to make this work,’ ” Hutton said.

Because they did so, most sports events were played, the prom went off without a hitch and last week’s graduation took place in the school gym, where each of the 12 seniors was allowed up to 20 guests.

Hutton smiled at that number. In the era of COVID, it helps to be small.

This weekend, high school graduates in Spokane will be joined by two guests, four if they’re vaccinated.

Apart from the steep hills rising in the east, there’s not much to differentiate Tekoa from other small Palouse towns. In every direction, rolling fields are green with early-stage wheat.

On Tuesday morning, Tekoa’s downtown streets were empty because most of its 800 residents were at work or in school. Many families are scraping by, a fact reflected by the district’s free- and reduced-lunch rate of 62%.

Those meals are served only at the high school for the simple fact that the district can’t find a practical way to put a cafeteria in its 100-year-old elementary school. For that reason, the younger kids walk the four blocks to the high school, a 1950s-era building that’s also showing its age.

When the pandemic hit, people lost their jobs and students were sent home. However, each went home with a Chromebook, the first sign that the district was ready for almost anything.

The “what next?” question was resolved by spring, as teachers were united in wanting to teach in school.

In the meantime, idle bus drivers were put back to work, carrying meals every day that were hand-delivered across the sprawling district – by a secretary, a paraeducator and even the superintendent.

By summer, almost every district faced the same tough decisions about what school would look like in the fall of 2020.

A significant number of families, roughly 15%, wanted an online option and left the district. Losing them meant the loss of hundreds of thousands of dollars in state support.

“It was a bold move by our board and our community,” Heid said, recalling the need to borrow money from other accounts and watching the district reserves get drained before the Legislature came to the rescue this spring.

Like many communities, Tekoa was adamant that children get their lessons in person. But unlike other districts, so were the teachers, a talented, veteran group with an average of 18½ years’ experience.

For the latter, it wasn’t a case of caving in; they wanted to be there. How else to explain the passion of teachers who in some cases are commuting up to an hour each way from Idaho, Spokane and Cheney?

Also at stake were the district’s high academic standards, especially at the elementary level, in which more than 90% of students exceeded state science standards and generally outperformed neighboring districts.

To prepare for school, Hutton spent part of the summer walking through the high school building with a 6-foot triangle, marking increments for desks and chairs.

Masks would be required, of course.

At the elementary school, Heid realized that he had too many second- and third-graders to meet social distancing requirements, so another teacher was hired to teach a 2-3 combo class.

The decision made, it was imperiled by events far away.

By late August, the party scene at Washington State University was in full roar. As COVID numbers spiked, all of Whitman County faced a retrenchment back to Phase 2 and more setbacks to local businesses.

“That was frustrating,” Hutton said, especially as Tekoa is almost 40 miles from Pullman, yet was stuck with the same COVID metrics as WSU’s Greek Row.

One thing didn’t change during the pandemic: the wheat harvest.

High school junior Riley Ramirez was on the farm and not missing school that much.

“I was struggling a little bit because we had to get the harvest in,” Ramirez said. “But then I realized how much you need to be in school.”

Ramirez also missed playing football. A hulking two-way lineman, he got in his licks this spring and vows to be back this fall.

More speed bumps followed. Despite the precautions, each school was closed for at least a week by an outbreak, though no cases were traced to in-school transmission.

There was no compromising on masks.

“We were pretty vocal on that,” Heid said.

For the most part, kids listened – and thrived.

On Tuesday morning, sophomore Wyatt Blaszak was on his way to a final exam in biology when he paused to look back on a remarkable year.

“I think most kids preferred it this way,” Blaszak said. “There’s been a lot more school spirit, it’s been easier to communicate with teachers and have a better school year overall.”