INDIANAPOLIS – Kansas was on its heels.

EWU brothers Tanner and Jacob Groves thrived on college basketball’s grandest stage, each scoring career highs of 35 and 23 points, respectively, as they attacked the Jayhawks inside and out.

The Eagles, playing in just their third NCAA Tournament, didn’t exhibit nerves on Saturday, leading Kansas for more than 20 minutes in the first-round matchup at Indiana Farmers Coliseum.

But when it mattered, No. 3 seed Kansas reminded 14th-seeded EWU why it’s among college basketball’s blue bloods and the Eagles are relatively unknown.

The slow-starting Jayhawks climbed out of a 10-point, second-half deficit and turned it on late, downing the Big Sky Conference Tournament champs 94-83 in front of a sparse, pandemic-limited crowd.

Kansas (21-8), which bowed out of the Big 12 Tournament last week after a positive coronavirus test and went on a short pause, shook off its rust down the stretch, connecting on 7 of 14 3-pointers in the second half.

“They made some big-time shots. That’s a big time-time program,” EWU coach Shantay Legans said. “We went toe-to-toe with them. I tell my guys we don’t believe in moral victories, but at the end of the season this was a moral victory for our program.”

McCormack, who returned to the team on Friday after clearing COVID-19 protocol, did most of his damage late and scored a team-high 22 points, mostly from offensive rebounds.

Kansas, which was also without starting forward Jalen Wilson (COVID-19 protocol), didn’t start McCormack on Saturday, allowing him to slowly settle back into the game.

Garrett, who is on several NBA draft boards, praised McCormack, whose jump hook with 3:26 left gave the Jayhawks their biggest lead (85-73). 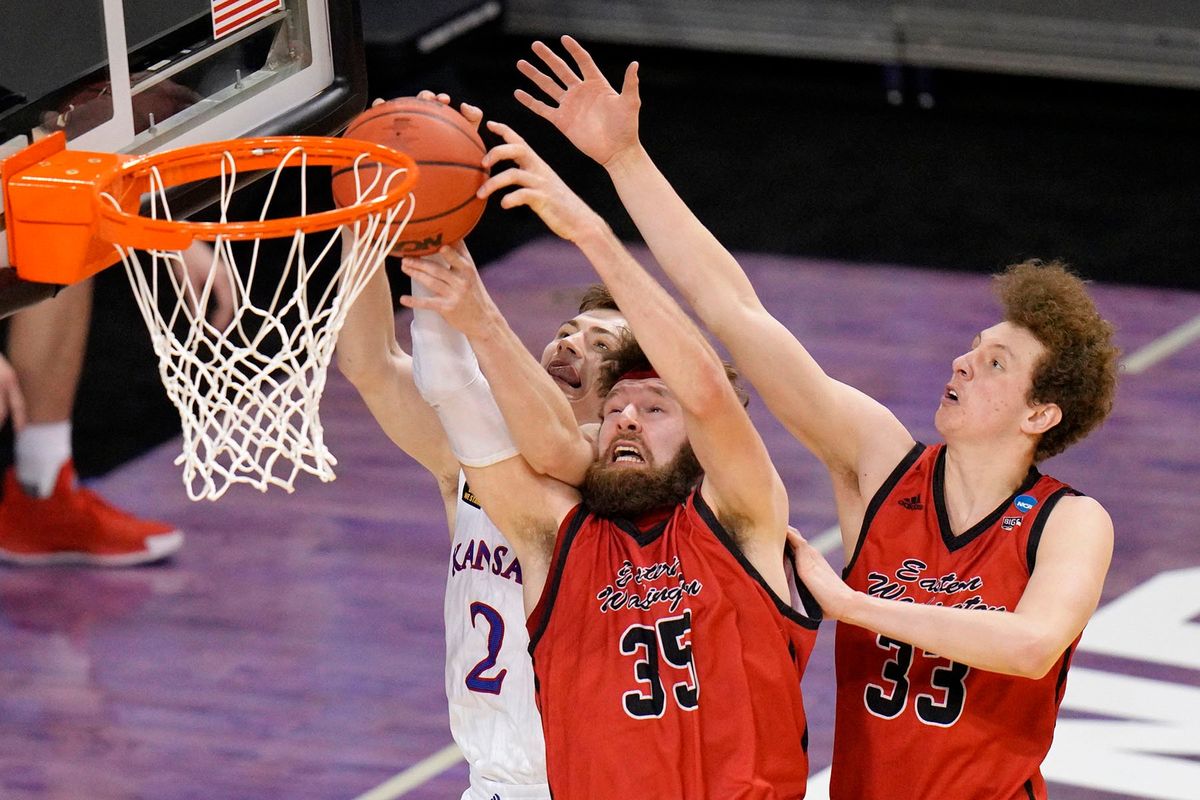 “Getting our big man back was huge for us,” Garrett said of McCormack. “His presence means a lot to us. He definitely brought us energy. From the time he arrived (Friday), we felt his energy, we felt his presence. He was just happy to be with us and he was happy to be back on the court.”

Longtime Kansas coach Bill Self wasn’t sure what he would get out of McCormack, coming off an illness.

“After the way he started the game, I didn’t think that he was going to give us much offensively or defensively,” Self said of McCormack.

EWU asserted itself from the start.

The Eagles jumped out to a 9-0 lead with McCormack on the bench, each bucket scored by one of the Groves brothers, graduates of Shadle Park.

Kansas quickly clawed out of that deficit and took small leads before the Groves brothers hit 3-pointers on three straight possessions. Tyler Robertson added another and the Eagles led 46-38 at halftime.

Michael Meadows’ (12 points) layup gave EWU a 50-40 lead early in the second half before the efforts of McCormack, Garrett and another likely NBA draft pick, guard Ochai Agbaji (21 points), and DaJaun Harris (13 points) began to take over.

“We kind of ran out of a little bit of gas,” Legans said.

Both teams shot the ball well, EWU at 50% and Kansas at 47.9%. They tied in rebounds (33) and were close in most statistical categories.

Tanner Groves wanted to help give EWU its first NCAA Tournament win, but he was proud of his team’s effort.

“It was a dog fight the entire game,” he said. “It was good to be able to keep it close with Kansas, make it a game and give them a little bit of a scare.”

Kansas, which won its 14th consecutive first-round game, will face USC in the second round on Monday.

Sixth-seeded USC opened with a 72-56 win over Drake.