The transformation of the Latah Valley from a rural haven to a bustling urban corridor would get a jolt if a plan for a 98-acre mixed-use development with dense housing and commercial space comes to fruition.

Developer Harley Douglass asked the city of Spokane to pave the way for the project in October by altering its comprehensive plan to create a new District Center at the south end of the Latah/Hangman Neighborhood, adjacent to the city’s southern boundary, on his property at 6211 S. Meadow Lane Road.

The city’s comprehensive plan, which guides its growth, features a “centers and corridors” approach that aims to focus growth within such District Centers and along corridors. Zoning, incentives and other tools are used to encourage denser housing mixed with commercial and office space to create more urban, walkable zones along public transit lines. 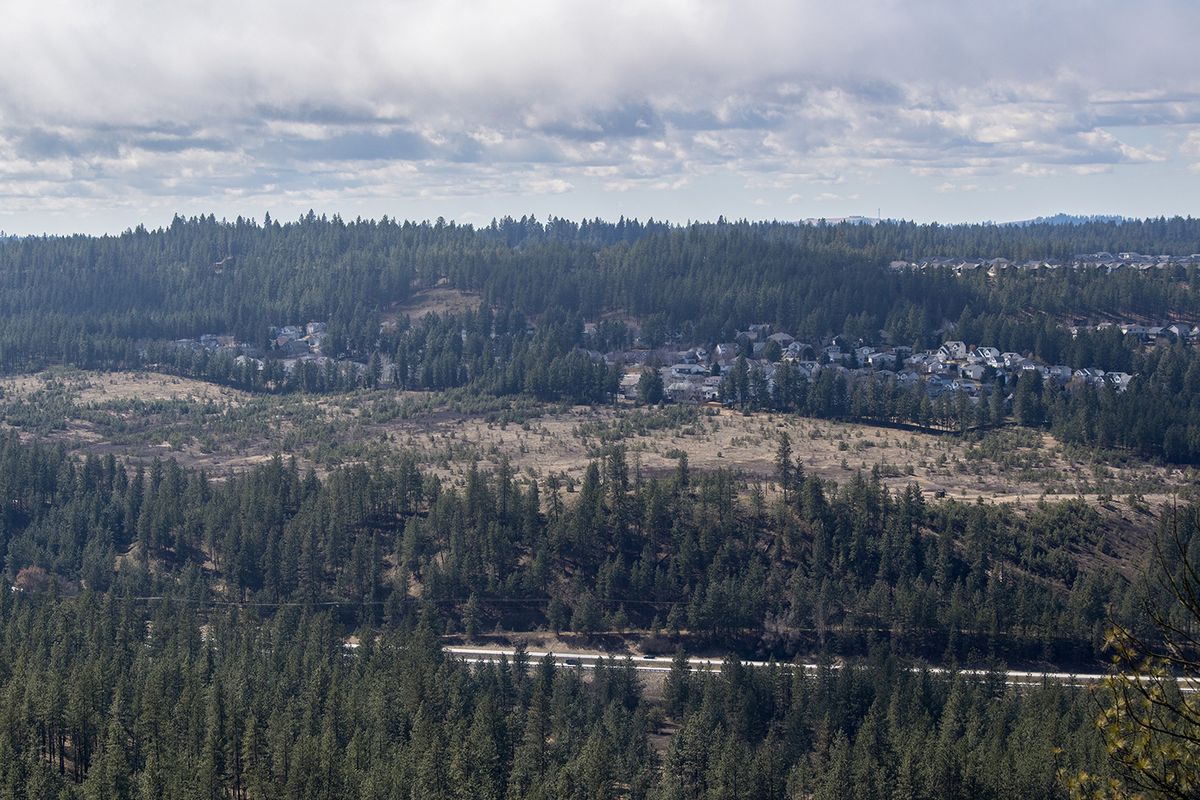 Developer Harley Douglass has applied for a zoning change on land seen here on a short bluff above U.S. 195 and downhill from the Eagle Ridge subdivision south of Spokane. Douglass’ plan is for both residential and commercial use. (Jesse Tinsley/The Spokesman-Review)

But much of the Latah Valley, including the site Douglass has eyed for development, is zoned only for single-family homes and lacks commercial and public-transit services.

According to Douglass’ comprehensive plan amendment application, though, the future of the proposed new center would “contain a mix of uses including; higher density housing around and above retail and commercial establishments; a variety of compatible housing types, including work/live, rentals, duplex, and townhouse residences and; transit stops and amenities. A variety of housing options around the center will also be included.”

Last month, a committee of three City Council members and three Plan Commission members evaluated this and a batch of other applications for comprehensive plan amendments.

The docketing committee, as this body is known, decided to separate the proposal from the rest of the proposed amendments to the comp plan and to instead consider it through the broader lens of what’s known as a subarea plan.

The outcome of that plan may well be a new District Center in the neighborhood, though it won’t necessarily be located on Douglass’ parcel, according to Lori Kinnear, a city councilwoman and docketing committee member.

The subarea plan, she said, will “drill down” to consider a number of questions about the neighborhood, about “where to put a center” and about what kind of development people would want around the center, such as “how would it work, how would it look. What would be the implications for traffic? How would it fit in with other developments? How would it affect (U.S. Highway) 195?”

Concerns about safety and congestion on U.S. 195, the main artery for moving traffic in and out of the area, have stymied development since last year, when the Washington state Department of Transportation demanded the city of Spokane “adopt a development moratorium for the U.S. 195 traffic shed area” until it deals with the “crisis in management of safety within the corridor.”

The city, WSDOT and a number of regional partners are working to solve those issues and recently came up with a list of possible changes to the local road network, but it’s not clear when sufficient fixes will be implemented to allow development to proceed in the corridor.

While Douglass did not respond to requests for comment about his proposal, the application he submitted suggests he is aware of the broader infrastructure concerns.

“Given the problematic traffic issues in the area,” the application states, “neighborhood commercial facilities will likely have a lesser impact on the existing roadway system compared to strictly residential uses.”

The application also argues the development “would enhance the area by providing more diverse housing and mixed commercial uses while providing alternative modes of transportation and a safe, pedestrian-friendly environment.”

Kinnear said those qualities are just what the city looks for when creating new District Centers where life can be lived in a “condensed but more efficient” fashion than is typically available in a sprawling city.

And she said the Latah Valley is badly in need of one.

As for whether the Douglass property is the best place to put one, though, Kinnear said it’s not clear.

The Latah Valley already has a small cluster of businesses along Cheney-Spokane Road, near U.S. 195, where a Yoke’s Fresh Market and a couple of restaurants and coffee shops are located.

“The proposed area, if you look at a map, where Harley is proposing to build a center is quite a ways away from where the current grocery store and restaurant are,” Kinnear said. “That was one of the concerns. The other concern was water – how to get it there.”

With those concerns in mind, Kinnear said, the “docketing committee recommended the planning department study that and do a subarea plan and really dive into where that neighborhood center should be so that it’s in the best place.”

“I like the idea of creating density around it,” she said. “I just want more information, and I want it more holistic. I want to look at what else is being proposed for that area. Maybe that center needs to be bigger for that area. … There are a lot of unanswered questions. I think (Douglass is) just a little bit early in the request. Once those questions are answered, we’ll be a better position to answer. … This isn’t saying no. It’s saying no for now.”

“I think there’s definitely merit to it,” Francis said. “Just the scope of it was so large. But if City Council elected to add it to (the Plan Commission’s) work plan for subarea planning, I think it’s worth considering. It’s an interesting site because it’s right up off of 195, and it would provide some commercial activity in the area to help take some of the pressure off 195. But would the net change (to reduce traffic) be there or not? It was just too complex to consider it the way it was being requested.”

Douglass seemed to acknowledge this point in his application, where he noted that the “process for a private individual to initiate a subarea planning process is unclear … .”

Candace Mumm, Kinnear’s colleague on both City Council and the docketing committee, said the subarea planning process will give the city a chance to work with neighbors in the Latah Valley to decide “where they potentially want to site a retail or mixed-use center.”

Mumm said the city has had previous success with the process, pointing to East Sprague and North Monroe as examples.

But she also said “it’s way too early” to know where a center will be located or what will ultimately be developed, if anything, on Douglass’ land.

“The community conversation has not even begun on this,” Mumm said. “And I’m excited for that to happen so we can have more clarity for the developers so they can put in applications that can be processed more quickly.”

For now, though, Douglass’ project will join a long list of proposed area developments awaiting approval from the city, including the 425-home Marshall Creek Estates project and the 160-home Qualchan View Estates proposal.

In a city where housing is in short supply, that backlog is particularly problematic.

“We need a center,” Mumm said, “and we need more housing.”

But despite that need, both Mumm and Kinnear said a longer look at Douglass’ plan and the broader question of a District Center is warranted.

Despite the recommendation of the docketing committee, City Council could still approve Douglass’ comprehensive plan application for his property to be designated a center.

City Council would also have to approve the formulation of a subarea plan for the area, though the Plan Commission would determine the scope of the study.