Longleaf will offer a two-day Wilderness first aid course in Spokane Oct. 1 through 2 and one in Sandpoint Dec. 4 through 5.

Imagine, the cable snapped. The beam upon which five people stood 30 feet up hurtled to the ground. The taut metal’s explosive recoil ripped a man’s eye out, leaving him shocked and disoriented. The nearest ambulance? At least an hour away.

Now you’re on the scene. What do you do?

Or, you and a friend are backpacking and his stomach starts to hurt. The nearest town? One day’s hike.

Or, you and your buddies are ATVing. After a long day, you get turned around. By the time you figure out where you are, the light is fading. Rushing to get home (or to the bar) your friend took a corner too fast and slammed into a tree. A branch speared him in the lung. His ankle is hamburger.

What do you do? 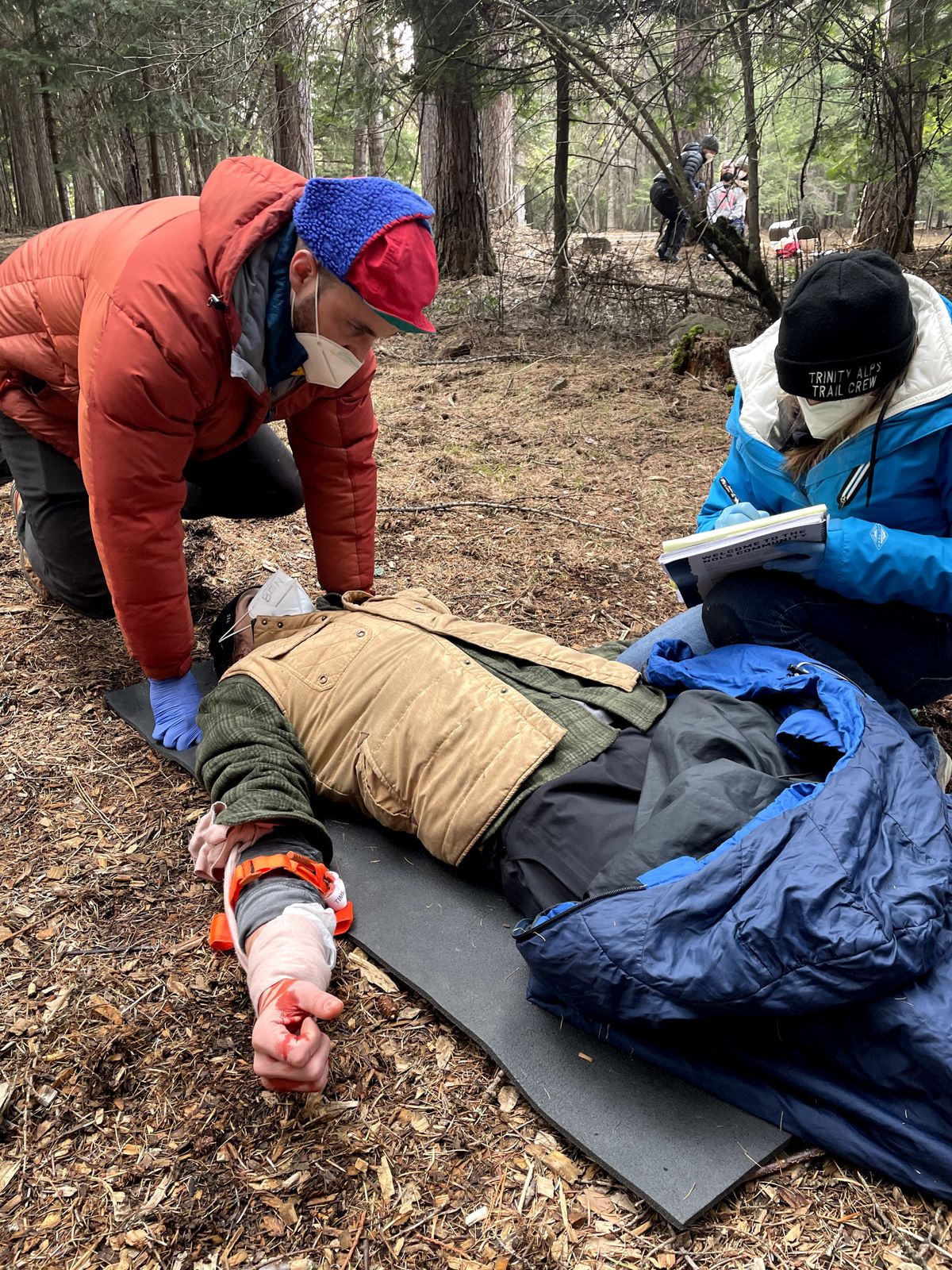 Gabe Rowell tends to an “injured” patient during a Wilderness First Responder course near Coeur d’Alene in March. (Courtesy of Travis Welch)

These were all scenarios presented to 32 students during a nine-day Wilderness First Responder course in Coeur d’Alene in March. While the details varied, the process and mindset emphasized by the National Outdoor Leadership School instructors were consistent and accessible.

“It’s an accessible level of medicine for someone who knows nothing about medicine,” said Travis Welch, one of the course instructors. “And it provides people with the ability to help their friends and loved ones when things go bad in the backcountry.”

The course is intense – an emergency medical crash course packed into nine or 10 days – but the instruction style, lectures punctuated often by hands-on-practice, keeps overwhelming feelings at bay. The emphasis on hands-on-learning and making decisions during stressful situations is heightened by stage makeup and acting.

Wilderness medicine is a relatively new field, with the Wilderness Medical Society founded in 1983, and traditionally has been the purview of guides and other outdoor professionals. That’s changed over the years, however, and the global pandemic has only accelerated the shift.

“It’s for anyone that goes outdoors,” Welch said.

Or for anyone who can’t rely on prompt professional medical service, added Paul Holle, the other instructor of the March course.

“The last year there was an increased desire from a lot of folks to understand things a little more in depth,” said Holle, who owns Idaho Rescue Training. “This is a common thing, through a major national emergency or this health emergency.”

The diversity of motivation was on full display during March’s course. While there were plenty of people attending in hopes of becoming guides – a Wilderness First Responder certification is a prerequisite for reputable guiding outfits – there was also a pregnant woman and her husband hoping to be better prepared for recreating with their newborn. Plenty of weekend warriors were also looking to learn more about being safe far away from a hospital.

Since the pandemic, Holle said interest in all levels of training have increased with most courses having waiting lists.

“All of our programs have been consistently growing,” Holle said.

That increased interest is a good sign, Holle and Welch said. As more people flock to outdoor recreation, it becomes increasingly important to have the basic medical skills to deal with an emergency.

“The more people we educate, the safer we all are together,” Welch said.

But what do you learn? Lots.

The Coeur d’Alene course, which was held at Camp Lutherhaven, went over the basics of wound care, how to apply a tourniquet and how to improvise one. Students also learned about heart attacks, high-altitude sickness, snake bites, broken bones, injured spines, lost limbs, bacterial infections, and how to call and plan for a rescue.

But more important than the discrete knowledge was the assessment and response process that the course emphasized. Using mnemonics, students learned a basic assessment system that quickly identified the extent and severity of the injuries and makes a plan for care and evacuation.

The entire curriculum is built around the real-world experiences of NOLS guides, who each year take thousands of clients into the backcountry. The input of search and rescue crews and other wilderness medical responders is added, Holle said. Curriculum is updated yearly to represent the newest science and best practices.

“Having that relationship between the classroom medicine and the field medicine makes the medical education that much better,” he said.