PORTAGE, Wis. – As the Empire Builder rolled out of Chicago’s Union Station on Monday, something felt different.

It was the first day of regular, daily service on the Chicago-to-Spokane route since Amtrak cut service on most of its long-distance trains to just three days a week last October amid the pandemic, and the mood on board was almost ebullient. It was a striking contrast with my quiet overnight trip from D.C. to Chicago on the Capitol Limited, which won’t resume daily service until next week.

In the train’s sole observation car – something my previous train lacked – two dozen or so swiveling lounge seats soon became highly sought-after real estate. In front of the car’s floor-to-ceiling windows, a middle-aged guy with a Minnesotan accent struck up a lively conversation with a young Amish man, occasionally interrupted by excited phone calls with family members he was headed to visit in the Twin Cities.

At the back of the observation car, in one of a few diner-style booths not cordoned off for social distancing, sat a couple no less excited to be taking their first train trip since the pandemic began. 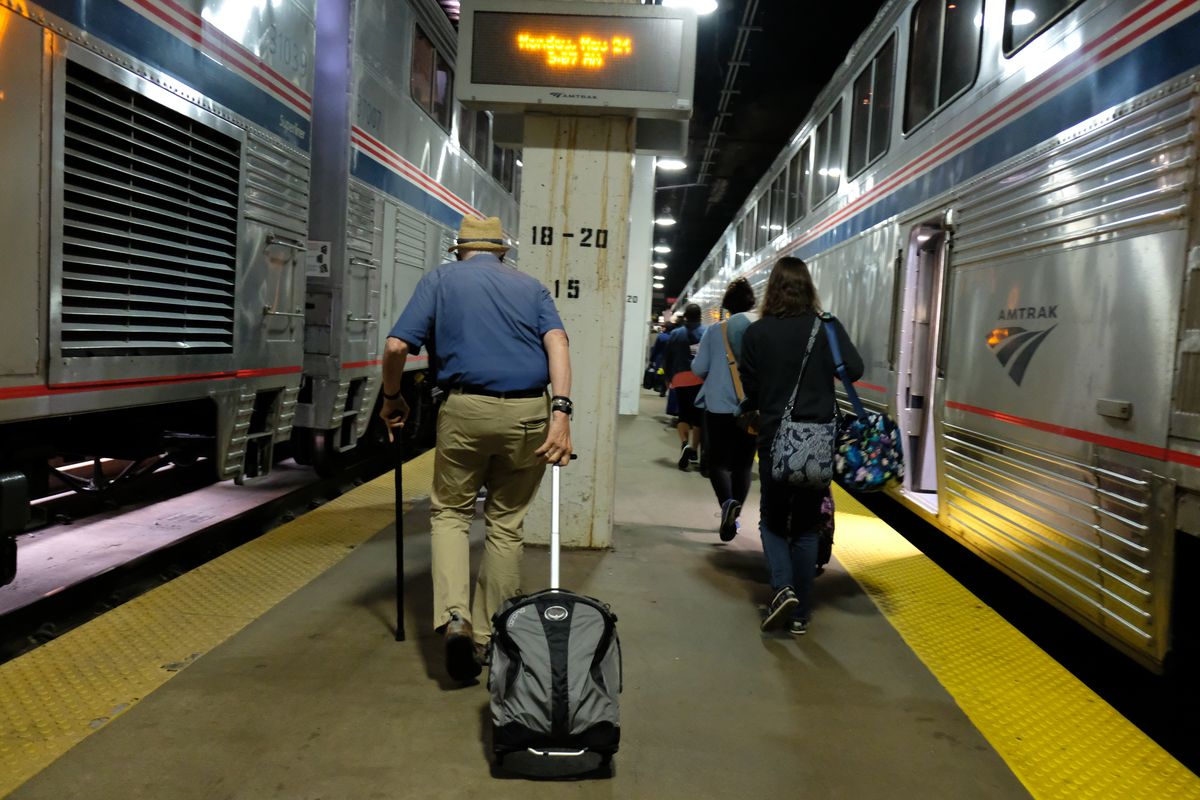 John and Elisabeth Muhlenberg were headed to Red Wing, Minnesota, from their home in Chicago for a long-awaited do-over after a winter storm foiled their last attempt to visit the Mississippi River Valley by rail years earlier. As the train flew along the Wisconsin River, the two railway aficionados steadied themselves against the rocking of the double-decker car with practiced ease.

John, 89, made his first trip on this route 80 years earlier, when his father went west to Portland from their Pennsylvania home to help build Liberty cargo ships for the Navy during World War II. Elisabeth, 77, was born in Germany and remembers taking steam-powered trains between her college and her hometown before she moved to the United States in 1968.

As an adult, John worked as a test engineer for the Association of American Railroads, an industry trade group. When he met Elisabeth a quarter-century ago, they began a tradition of long-distance train rides that has taken them all over the world in the years since. Some highlights, they recalled, were a trip from Turkey to the United Kingdom and a packed Amtrak ride from Chicago to D.C. for former President Barack Obama’s second inauguration in 2013.

Much has changed with U.S. railways, John said, since he rode the train to Oregon with his family at age 9. The post-war investment in American highways was a big factor, he said, as was the advent of commercial air travel. Gone are the dining tables set with fine china he remembers. On this train, microwaved hot dogs and DiGiorno cheese pizza headlined the dinner menu.

Yet Elisabeth and John said they still love taking the train. Why?

“You meet so many interesting people,” Elisabeth said.

“Meeting people is really big,” John agreed. “And you can see! You’re off of the … highway.”

While the couple rattled off the pros of U.S. rail travel, one of its primary cons transpired as our train pulled into a siding to let a freight train pass, a relatively brief delay that nevertheless added several minutes to our trip.

While federal law requires the private freight railways that own most of the track Amtrak uses to give preferential treatment to passenger trains, that often doesn’t happen and Amtrak has little recourse to hold the freight companies accountable. Before the pandemic, barely 40% of Amtrak’s long-distance trains arrived on time, according to the nonpartisan Congressional Research Service.

“We have time,” Elisabeth said with a laugh. That reminded John how one of his old colleagues at the Association of American Railroads summed up Amtrak’s service when it solicited suggestions for a new slogan decades ago: “If you’ve got the time, we’ve got the trains.”

As the train started back up and made its way steadily toward Minnesota, some of their patience must have rubbed off on me, because I was actually looking forward to spending nearly two more full days aboard.

On Monday night, I planned to check into my “roomette” for what I hoped would be a better night’s sleep than I got on my way to Chicago, before waking up Tuesday in North Dakota.