David Govedare, the sculptor of the Bloomsday runner statues in Riverfront Park as well as many other works seen across the country, died Wednesday. He was 71.

Govedere died of health issues Wednesday morning at the hospital, said local musician Cary Fly, Govedere’s close friend and frequent collaborator. He is survived by his only son, Forest.

“He was larger than life. A Hemingway-esque figure,” Fly said. “He was huge inside and outside and had so much love and all of that inside of him. … He encompassed life in a way that no one else could do because his scope was so huge. 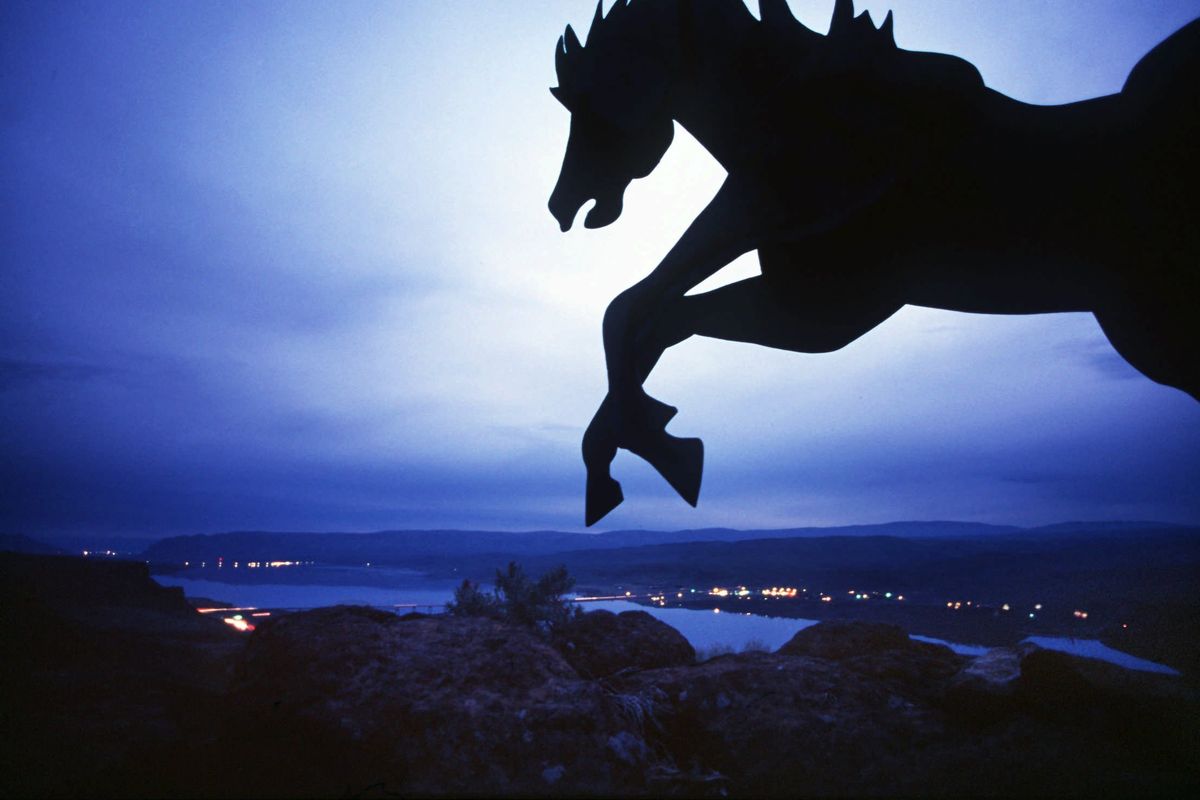 The lead horse from David Govedare’s wild horse monument sculpture forms a silhouette against the evening sky in 1995 over the Columbia River above Vantage, Wash. (Shawn Jacobson/The Spokesman-Review)

The fleet of life-sized metal runners that make up Govedare’s 1984 work “The Joy of Running Together” may be “one of the most successful works of public art in our region,” said Karen Mobley, a local visual artist and public art consultant.

“It commemorates something that’s really important to lots and lots of people,” Mobley said, “but it’s also kind of taken on its own life where people use it as a way to interact and participate with the sculpture around other things besides Bloomsday.”

Pieces from the artist’s portfolio can be found on the outside of walls and standing in front of several high schools across the state.

Govedare’s more famous works include the 2002 piece “The Guardians of the Lake,” on which he worked with Keith Powell. The 25-foot, 800-pound metal feathers were installed in the Northwest Boulevard median in Coeur d’Alene in May 2002.

Fly said he hopes to see the sculpture, which has faced funding challenges, get finished someday.

“He has small models of (the basket), of course,” he said, “and he has all of the dimensions and all of the instructions on how to build it at hand for whoever does it. Maybe his son; he taught his son how to do that.”

Outside of the Pacific Northwest, Govedare crafted the 1997 “Phoenix Fountain” sculpture located outside of the Doyle Convention Center in Texas City, Texas. Another in Texas City called “Somewhere On The Trail,” which depicts the silhouette of a mounted Native American gesturing to the sky, was unveiled in 1999 in Bay Street Park.

Mobley, who worked on a few projects with Govedare over the years, said much of his art is resourceful – as seen from his use of found materials – and reflective of his interests in indigenous communities, the human form and gestures.

“I doubt there’s hardly a person who’s driven from here to Seattle who isn’t familiar with his horses that are on that ridge up above the Vantage Bridge,” she said. “David is an iconic guy in terms of his work, but he’s also a beloved person.”

A California native, Govedare first came to the Spokane area for an internship with an architect during Expo ’74. At the time, he was a California Polytechnic Institute architecture student.

Fly said the two met in the early ’70s at the former Goofy’s Tavern, where Fly was playing a show. Fly said he and Govedare grew “closer than brotherhood” from then on; Govedare designed the covers for Fly’s six albums, while Fly wrote music for his sculptures.

“My god, what a genius,” Fly said. “Just a fabulous artist and an extraordinary human being.”

Mobley described Govedare as “a fabulous dancer,” saying he was always seen at blues music festivals and the like where he was “the life of the party.”

“He just had huge energy for that, especially when he was a little bit younger,” she said.

“His legacy will live on, undoubtedly,” Fly said. “He put himself in all of his artistic works, and he put himself into all of his interpersonal relationships and did it better than anyone could. Shakespeare would have a tough time describing his magnitude.”