On a February day, with wind-whipped temperatures falling to 4 below zero, Colville tribal leaders approved an unusual transaction at their offices in Nespelem.

They agreed to accept ownership of a 9,243-acre ranch from Seattle-based Conservation Northwest, so long as the tribes agreed to a set of ownership stipulations (known as covenants) aimed at conserving the biodiversity of that land.

The arrangement, which had been a decade in the making, represented a cultural and ecological milestone: simultaneously securing a key habitat corridor between the Cascade and Rocky Mountains and returning tribal land taken by the U.S. government in 1892.

That same morning, roughly 60 miles to the west in the Tunk Valley, Ernie Figlenski was in the wind wrangling cattle as he’d done for most of his 65 years. He knew that shrub-steppe land in a deep way. His family first settled in the Tunk in 1904 and raised four generations of Figlenskis. But Ernie and his brother were both bachelors and childless, and the family name was ending. 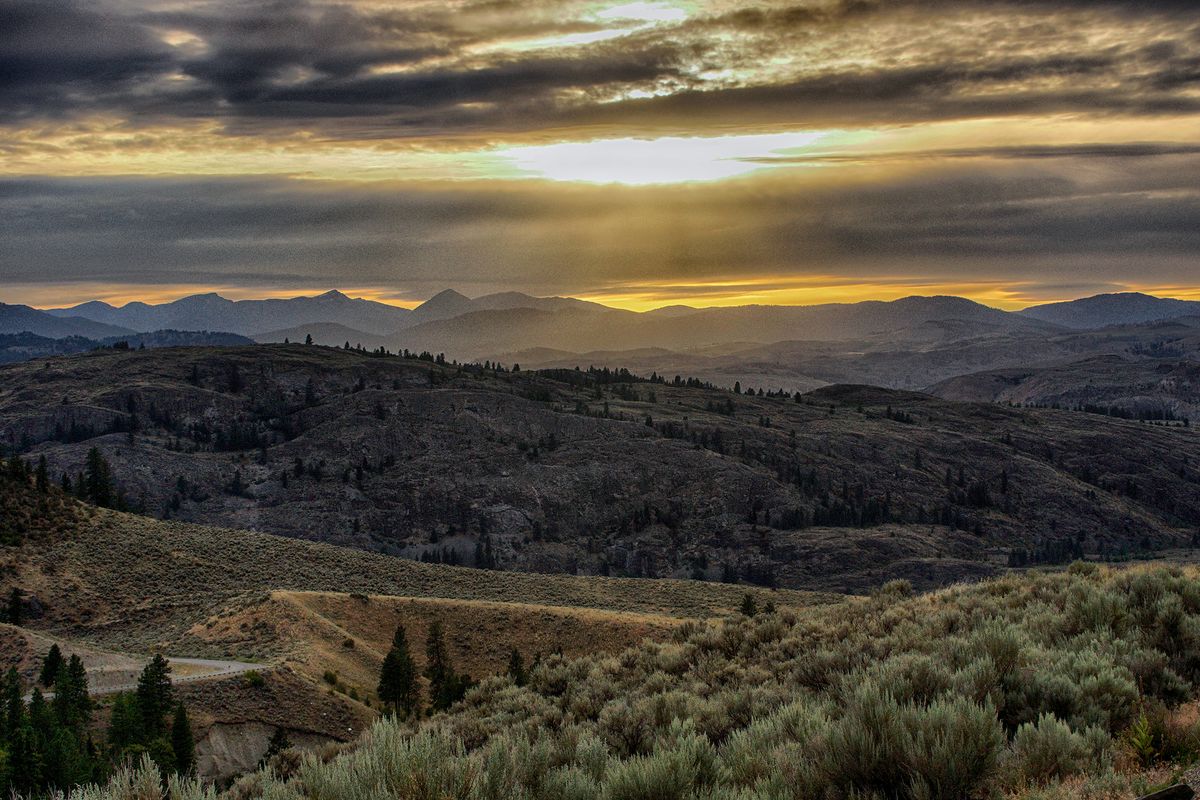 First his mother died, then his brother and, most recently, his 90-year-old father. By February, their 15,000-acre ranch had shrunk; 3,000 acres sold to neighboring ranchers and 500 acres to a California developer who was in the process of breaking it into 40-acre chunks to be sold to city-weary folk.

The day prior, hoping to avoid further fragmentation of his family’s lands – their last legacy on this earth – Figlenski signed a document agreeing to sell the remainder of the ranch to Seattle-based Conservation Northwest, with the understanding that it would be given to the Confederated Tribes of the Colville Reservation. This would preserve the wild beauty of a place he loved, a place where he maintained he’d seen a wolverine and, even more incredibly, a Canadian lynx.

Perhaps he was thinking about this the day the Colville Tribal Business Council approved the deal. Perhaps he focused solely on hauling in a truculent calf, unaware of the Nespelem meeting.

No one knows, because Ernie Figlenski died that frigid afternoon, his cousin finding him in a corral surrounded by his cattle and alone on the land.

“He signed it the afternoon before. And that next morning God took him away,” said his cousin Mary Scholz. “I know he’s smiling. He’s smiling down on us.”

Washington is crowded. The smallest Western state geographically, the Evergreen State is home to nearly 8 million people and a nearly full suite of native carnivores and herbivores.

That’s because the state has relatively large pockets of excellent habitat, albeit fragmented and disconnected pockets. Going north to south through the Cascade Mountains, bears, cougars, deer, elk, wolves, wolverines and more must navigate highways, a journey that’s gotten somewhat easier in recent years with the installation of wildlife crossings.

Heading east is also challenging, with highways, roads, cities and agricultural lands frustrating movement from the Cascades to the Kettle, Selkirk and Rocky mountains in the east.

Habitat will likely only get more fragmented as more people move to Washington, pressing outward into formerly rural lands.

This matters a great deal. Isolated groups of animals and species are more likely to go extinct, cut off as they are from the genetic diversity of larger populations; or trapped and unable to migrate away from threats such as wildfire, drought or disease.

“The problem of habitat fragmentation, and of the animal and plant populations left marooned within the various fragments under circumstances that are untenable for the long term, has begun showing up all over the land surface of the planet,” wrote journalist David Quammen in his book “The Song of the Dodo.”

All of which means broad, landscape-scale conservation aimed at connectivity is a priority for organizations like Conservation Northwest, said executive director Mitch Friedman.

And according to several habitat and wildlife movement analyses, the most suitable wildlife corridors heading west and east tend to converge in the Okanogan and Tunk valleys. In other words, animals hoping to trek from the Cascades to the Kettle Mountains and then, perhaps, onto the Rockies – or vice versa – will likely pass through the Figlenski’s 10,000 acres.

“It’s the only real connection in the Lower 48 from the Cascades to the Rockies,” said James Begley, a landscape ecologist with the Washington Conservation Science Institute.

That made conserving the Figlenski land all the more vital. The problem? Before the Figlenskis moved into the Tunk Valley in 1904, that land was the purview of a people with an ancient claim.

Land conservation has an ethically checkered past in the U.S.

The national park system, of which Washington has three, was the first broad scale effort by the United States to preserve lands. In 1872, President Ulysses S. Grant signed the Yellowstone Act decreeing that the land would be “reserved and withdrawn from settlement, occupancy, or sale under the laws of the United States, and dedicated and set apart as a public park or pleasuring-ground for the benefit and enjoyment of the people; and all persons who shall locate or settle upon or occupy the same, or any part thereof, except as hereinafter provided, shall be considered trespassers and removed therefrom.”

With a stroke of a pen, Indigenous people who had lived on those lands for generations were trespassing. Other famous parks – Yosemite and the Grand Canyon, for example – have similar origin stories, preserves carved from lands once inhabited by tribes.

As the writer David Treuer wrote in the Atlantic in May, “The American West began with war but concluded with parks.”

The story was broadly similar in Washington and the Tunk Valley. Prior to the Figlenski family immigrating from Wisconsin to Washington, the Tunk Valley had been within the traditional territory of the Okanogan Tribe for, as the tribe says, “time immemorial.”

When the Okanogans and other tribes were moved onto the Colville Reservation in 1872, that land was included in the Congressionally designated reservation. However, gold was discovered in the Okanogan Valley in the late 1800s and the federal government repossessed the northern half of the reservation, including the Tunk Valley property.

So, 32 years after the Federal government halved the reservation size, the Figlenski family moved from Wisconsin and homesteaded in the Tunk.

Mitch Friedman considered this context as he worked on conserving the land. Conservation Northwest, like most nonprofit land conservancies, doesn’t own land. Instead, it purchases property and passes it on to other entities to manage.

The Figlenski Ranch had been on the market since 2015, when wildfires burned through the ranch, destroying several family homes. But the pressure started building about a year ago, as the real estate market, particularly for rural land, boomed. After considering several other organizations, Friedman reached out to the tribes to see if they had any interest.

Conservation easements are voluntary legal agreements that permanently restrict the use of the land and give nonlandowners some limited power over it. They are common, and used particularly when a family legacy is at stake. However, any sort of legal loss of control of the land was not an option for the tribes because of “sovereignty issues,” Friedman said.

And so, CNW and the tribes got creative and drafted a restrictive covenant that the tribes placed by tribal resolution on the property to protect in perpetuity its conservation values. Like conservation easements, covenants run with the land and their restrictions are legally enforceable via the courts, even if they don’t give nonlandowners any direct control over the land.

This proved amenable to the tribes and to Ernie Figlenski, Friedman said.

“He was concerned about the family’s legacy and the wildlife that they loved,” Friedman said about Figlenski’s demands. “He needed to know that somehow the property would be protected.”

All of which set the stage for the tribal council vote in February and the subsequent purchase, and transfer, of the land to the Confederated Tribes of the Colville Reservation. During 2021, CNW raised money and then, on Oct. 7 purchased 9,243 acres for $4,621,500, nearly double the nonprofit’s annual budget.

The return of traditional land to tribal control also felt right to Colville Tribal Chairman Andrew “Badger” Joseph. That land is good sharp-tailed grouse habitat, a species important to the tribes ecologically and spiritually. Tribal members will also use the land for subsistence hunting and gathering.

The nontribal public will be allowed to access the land for “temporary and non-consumptive uses.”

The covenant’s restrictions didn’t bother him, or the Colville Tribal Business Council, Joseph said, because the tribes shared those “common goals of preserving the land and bringing it back to as much of its natural state. (So) our council was OK with the covenants … because it follows our own traditions.”

“Conservation is pretty much a tribal practice,” he said. “From time immemorial. Our people were always brought up to be respectful to the land and what it offers to our people.”

Correction: Due to a reporter’s error the rough number of people living in Washington State was misstated.