Louise Butler ditched her lawnmower years ago. She doesn’t like the chore, so over time, Butler pulled out patches of grass at her South Hill home to replace them with various wildflowers and perennials.

From February to October, blooms cover all the landscape with different hues – thanks to shrubs, ground cover and more flowers than she can name. A Spokane Symphony cello player, Butler enjoys tinkering outside to watch the seasonal changes.

Long before the trend to remove lawns, she had gone all-in with all flowering plants, including her favorite tulips and baby’s breath.

The landscape almost daily is never the same, she said. A neighbor earlier this spring admired her “purple backyard” filled up with flowering allium and other blooms. Colors from blue and white to yellow draw in pedestrians or cyclists along Adams Street. Sometimes, they’ll even visit.

“When I moved here in 2000, this was all lawn,” said Butler, 72. “I had a lawn mower, then it broke. I got another lawn mower and it was hard to use. It was just a chore. … I decided that I would start pulling out the grass, so that I had even less grass. I put in a forsythia bush, a lilac bush, a couple of other things. It just took off from there.” 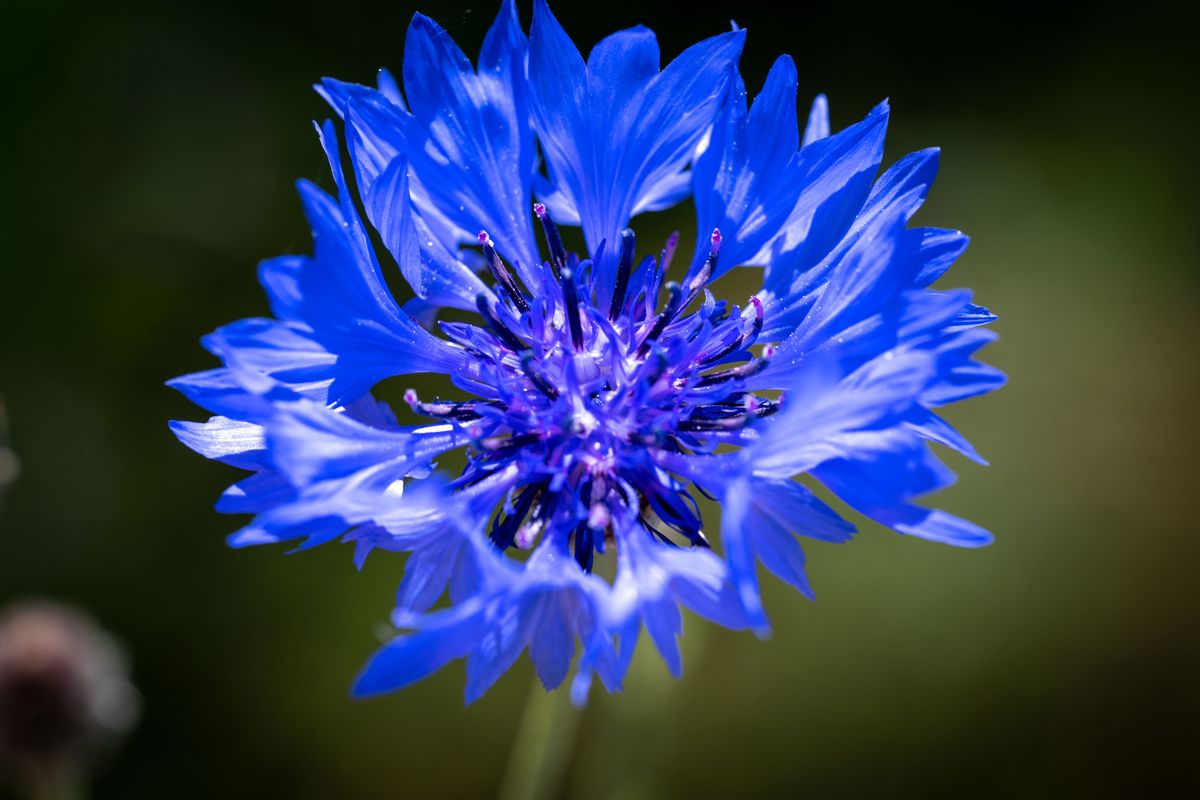 A cornflower bloom is one of the many wildflowers that grow in Louise Butler’s yard on South Adams Street. (COLIN MULVANY/THE SPOKESMAN-REVI)

The changes began about 17 years ago, when she sprinkled seeds here and there or brought in a lilac. She decided it was a must to add more tulips, with varieties that bloom early, midseason and late spring.

“I’m a tulip fanatic. Anything that takes care of itself is good, so bulbs are good and perennials take care of themselves.

“I decided that anything that didn’t take care of itself couldn’t live here, so out came the grass little by little.”

Wildflowers often are an easy self-maintenance choice, she said. At the end of a growing season, she’d take their seeds and scatter them. Some wild things blew in with the wind.

“And people would give me things, or I’d get volunteered this or that.”

She recalled a first success with blue flax that arrived as a volunteer plant.

“I waited for the seeds and I started sprinkling them around then, and I got more blue flax the following year,” she said. “Then I bought some blue flax seeds and sprinkled them around, so now I have lots.

“It’s just fun, and beautiful and colorful. It’s a treat for the eyes. You know that you don’t have to water, really, and certainly not mow.”

Butler said she embraced xeriscaping long before the city of Spokane encouraged the concept, with recent years of offering incentives for residents who remove grass and replace it with drought-tolerant and native plants.

She doesn’t water much unless a certain plant wilts during the summer heat. Then, it might be a trickle overnight.

A few long strands of grass stubbornly try to come back, Butler said, so she routinely pulls them out along with any weeds.

The winters are far from drab, she said.

“February is when the snowdrops (flowers) start coming up,” she said. “They can come up under the snow, and then there is winter aconite that’s yellow; then pretty soon the Johnny jump ups come up, even if it’s snowing.

“Then there’s the crocuses, daffodils, tulips, irises, the phlox, then the shrubs, lilac, forsythia. Then it’s the – I can’t remember the name – we call it the popcorn bush. I have an apple tree which has finished blooming that’s on the parking strip, then the allium. It’s one thing after the other.”

She showed off a patch near the back that produces little yellow flowers.

“I don’t know what they are. I’m not a botanical person; I just like not mowing.”

Another variety up front has magenta flowers, she said.

“They do pop. They don’t take over. Again, it just happens, and here’s more lavender; it just walked over there.”

She has cinquefoil, which means five leaves.

“It comes up with five petals in a circle, so for me, this is like my family picture.”

Butler was one of five children raised in Penfield, New York. Her father worked for Kodak during the 1950s. Since coming to Spokane, Butler has regularly played for the Spokane Symphony. She also has a private teaching studio and is on faculty at Holy Names Music Center.

While she was outside her home one day in May, cyclists stopped for a while and admired the bounty.

“It was like heaven; everything was just so beautiful,” Butler said. “It’s such a joy to be out working in it, whether it’s taking out weeds of whatever kind. Of course, grass is a weed in my book, or it’s taking out little trees that have settled in.

“I’ve learned there is always something to do. In the winter, I get my exercise by shoveling, and if there’s no snow to shovel, then I get a break.”

Her yard setup is definitely less work than mowing once or twice weekly, she said.

“It seems to be insanity to do that.

“It’s much more fun to have things that are growing and you don’t have to water. You don’t even have to talk to them; they’ll still come up. It seems like a waste of energy to mow. It’s loud. It takes gas. It takes petroleum, all those nasty things and then you have to have a machine.

“I’m 72, and I don’t feel like I should have to push a machine around. To maintain what, a haircut on my lawn? And I’d have to water it. Well, we’re not supposed to water as much as we have been in the past.”

Most surrounding homes have traditional lawns, but Butler said she’ll never go back.

The neighbors tell her they enjoy the blooms in her yard. She’ll often take photos of a flower, and bees, to post on Facebook nearly every day.

“I feel healthy about it,” she said. “If I’m out there, people talk and they might stop and visit with me, which is kind of cool, or they’ll wave. It’s nice to connect with somebody that way, especially after the COVID lockdown and staying away from people for so long.

“The next-door neighbor is a landscape architect. He has a beautiful lawn and perfect plants, and we get along just fine.”