Family Promise of Spokane plans to host its 25th anniversary celebration titled "Homecoming" at 6 p.m. Oct. 27, with details pending. It will be open to hundreds of volunteers, former and current leaders and anyone who has received its support.

Volunteers also are needed. Check for reservations and information on the website familypromiseofspokane.org, and call (509) 747-5487.

Alone in 2013 with an infant daughter and 7-year-old son, Celia Winkle escaped from domestic violence while using her car as their shelter.

After two months hiding near Medical Lake, she and her children found a place to sleep at church buildings, and eventually a home through Family Promise of Spokane.

Family Promise set her family on a path of stability and even kept in touch years later, providing work boots or gifts for her kids. Now, it’s full circle. This year as a Life Center church member, Winkle and her small group selected Family Promise for a donation, gift baskets and help with activities for current sheltered families.

“Family Promise was just like a saving grace,” said Winkle, 38. “They were transferring for a week from church to church, and you’d stay at a church at night for a week. They had a van that took you to church at night, then they brought you back to the day center in the morning, which was heaven sent for saving gas.”

Winkle, who has a disability, still recalls nutritious meals and help with gasoline vouchers, diapers, clothes, job searches and day care. Volunteers came alongside her. 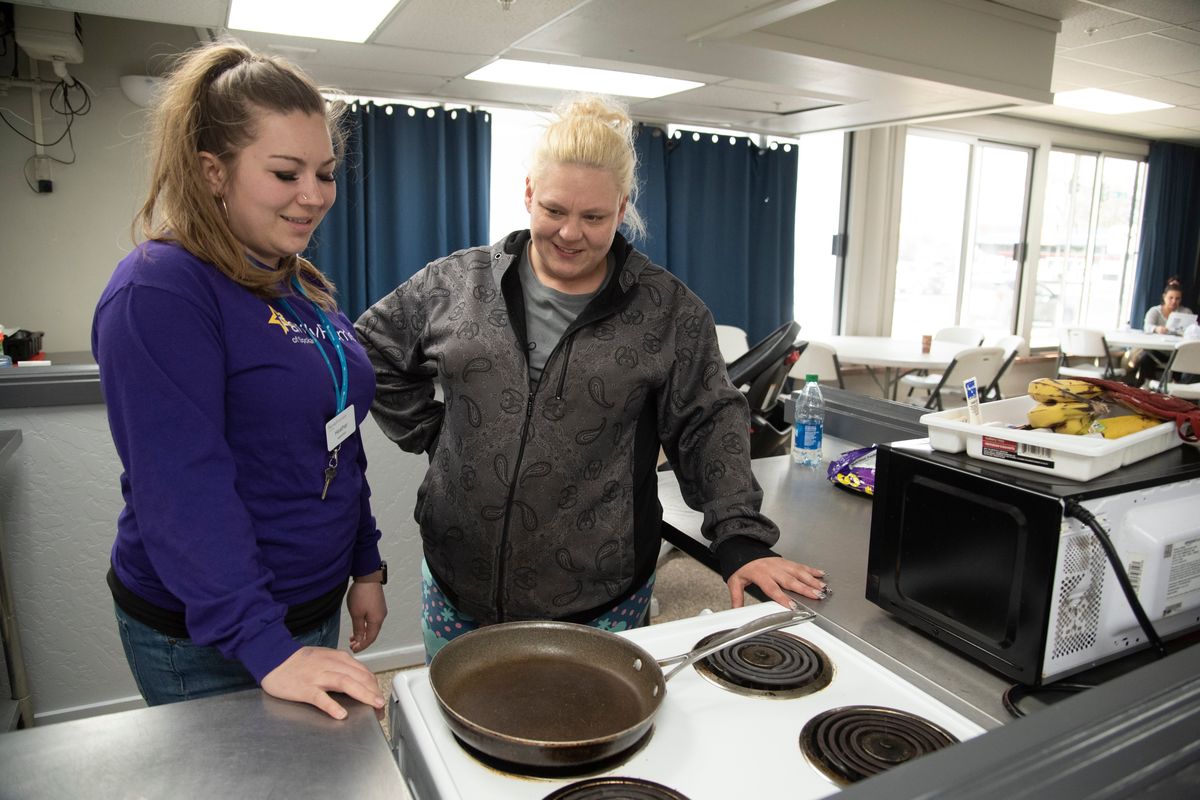 “Everybody there was super nonjudgmental. You’re scared when you’re homeless. They actually helped me get into a house and paid six months’ rent, utility bills, provided furniture. Because of this, I was able to get onto my disability and housing, which led me to staying in that place for eight years.

“They just picked me up off the street, shook me up, pushed me in the right direction, and they just held my hand in every way. I believe that was God. They don’t push religion on you, but they are godly people.”

Until 1997, Spokane’s homeless families had few options other than a car or couch surfing. Previously called the Interfaith Hospitality Network of Spokane, and still an affiliate of the renamed Family Promise nationally, the local group marks 25 years in Spokane County this month.

Until the pandemic, Family Promise relied heavily on support from regional churches, a backbone that leaders hope to return to by next year.

The group served 26 people its first year starting in March 1997 with support from 13 local churches, said Joe Ader, executive director. Last year, it served nearly 3,200 people, more than half of those being kids.

“(In 1997) local churches would house up to three families at a time in their buildings at night,” Ader said. “The churches provided food and volunteers for those homeless families. Each day, they would come back to a day center where they’d receive showers, case management and do laundry to help them get back on their feet.”

“In 2016, we opened the emergency family shelter, which is called Open Doors. That was the first walk-in, low-barrier shelter in Spokane County designed for families, so anybody caring for a minor child or who is pregnant.”

Until then, families would have to separate for shelter care, as places at that time were for either men or women with children. “Teenage boys, nobody knew what to do with.”

“We started Day 1 with 30 people,” Ader said. “Within a couple of months, over 100 people were at that shelter. It was really a realization of how big the family homelessness issue is in Spokane because it’s not visible. It’s not safe to have your kids downtown or standing at the street corner.”

Today, Family Promise runs its Open Doors emergency shelter at 2002 E. Mission Ave., and it now has five total shelters that include house sites. The group pivoted in 2020 when churches closed, but turning to a new model brought surprising results, Ader said.

When COVID-19 closed the rotational shelter program, “We had to open up a second location, a home in the South Perry District for families to stay in what we call a neighborhood site. Then, we saw just really high outcomes for families leaving that site into permanent housing, over 95%.”

It led to opening three locations in the past two years – a house for families with newborns, another for families with special needs and a Cheney neighborhood site. Those are four- to five-bedroom houses paired with four to five families sharing common areas, but each family has an individual bedroom. There’s a site manager.

Family Promise expanded its prevention and rental assistance programs, helping families avoid evictions. An after-care program now has a case manager staying with a family two years after they leave a shelter. That cuts down on a known risk of returning to homelessness in that period, Ader said. “Our mission is to equip families and communities to end the cycle of homelessness.”

Susan Heitstuman was part of the start in Spokane, in support roles and as a volunteer. By 2008, Heitstuman started working for the organization and still does.

She said church volunteers always had a background check and training. “You weren’t supposed to preach religion, and you weren’t supposed to say, ‘Why are you homeless?’ ” she said. “It’s more like sitting around with families and visiting, letting families take the lead. If they wanted to ask about your faith, you could share.”

“Over 25 years, it’s always had the same heart. Family Promise is about the children and families getting stabilized again. It’s truly taking individuals and seeing where they need help, helping them have growth and walking with them through a very difficult period.”

Ader said that although there are likely families needing shelter today, capacity for a few beds has remained open for a while.

“We’ve been operating with capacity available since Dec. 4, the first time in our 25-year history that we haven’t had to turn families away in this long of a time period,” he said. “Last night (March 14), we had five beds available – not much – enough for about two families.”

Ader said Family Promise plans a return to a church support model, probably in 2023, with two models likely. The first would be some rotational stays for families at churches, but the other is to have churches adopt a site for a week each quarter – providing food, volunteers and property maintenance – and befriending families.

“I think the biggest thing that is probably missing in the homeless system as a whole is rebuilding community connections,” Ader said. Loss of relationship means you have no one to lean on and nowhere to go.

“If we want to end homelessness, we not only have to get folks into housing, but we have to rebuild community around them.”

Winkle plans to be part of that community.

“I want to get the name Family Promise out there,” she said. “I’m so grateful for them, and that’s why I’m trying to do what I can in my church group to give back. That’s how much of an indent they’ve made in my life.”