Curt Hanson knows a classic when he sees one, but the 1929 Model A Roadster he happened upon decades ago didn’t look like much when he first spotted it.

The details of that first sighting have become blurred over time, but one thing is certain: Hanson didn’t even have a driver’s license when he got the car.

Home was Detroit Lakes, Minnesota. The battered Roadster didn’t even have wheels, so when Hanson’s dad wasn’t around, he jacked up his father’s 1950 Ford, and swapped the tires to the Model A. He tooled around the countryside, careful to get home and replace the tires before his dad returned.

After graduating from high school in 1956, Hanson left the Roadster behind when he and a buddy hitchhiked to Seattle to find work.

In 1959, he moved to Spokane, settling on acreage above the Pullman Highway. He worked in the floor covering industry and volunteered for the local fire department.

By 1980, he was thinking about the car he’d left behind and launched a cross-country road trip to retrieve the antique auto. It had to be towed, but even if it was roadworthy, Hanson said, “I have to admit, I wouldn’t want to drive it all the way from Minnesota!”

Once home, he slowly but surely began to remodel the vintage vehicle.

“The front fender and headlights are original,” he said.

He ran his hand along the sleek purple body and shrugged. 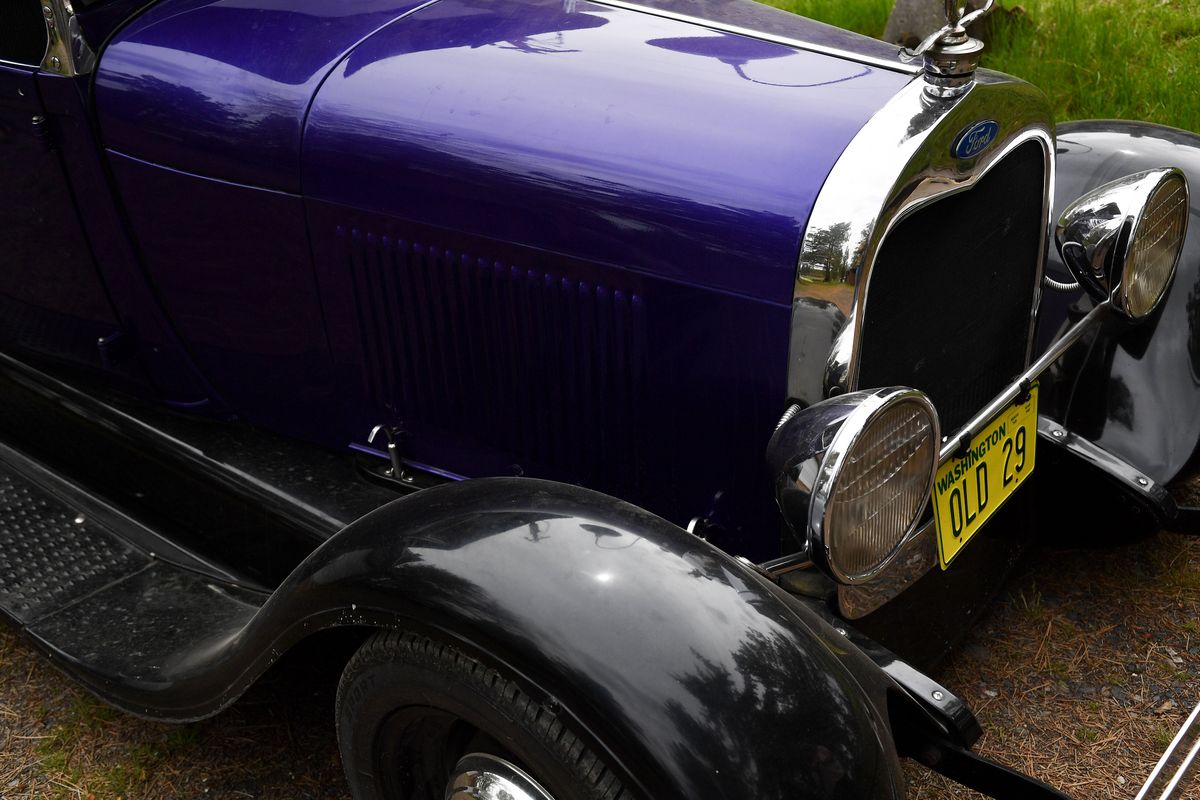 Curt Hanson’s Ford Model A sits in his driveway on Monday, May 2, 2022, at his home in Spokane, Wash. (Tyler Tjomsland/The Spokesman-Review)

The original running boards offer a foot up to the remodeled interior. The windshield opens outward. If you look closely at the front of the Model A, you can see the hole for the hand crank that was provided to buyers for emergency starts.

Hanson slid behind the wheel and turned the ignition. With a satisfying roar, the car rumbled to life. The fuzzy dice hanging from the rearview mirror swayed with the vibration.

When asked how his remodeled Roadster drives, his reply was succinct.

Like most Model A’s, Hanson’s came with a rumble seat, which is stored in his garage. He carefully polishes the original chrome handles used to help boost passengers into the seat.

He had the transmission rebuilt, but much of the other work was his own.

“If you look in the dictionary under the word cheap, you’ll find my name,” he said. “And I like things that are different.”

A 1938 International truck in his garage, perfectly illustrates his point.

The utility vehicles were nicknamed cornbinders, because of their use on farms. He paid homage to the tradition by having “Cornbinder” stenciled onto the tailgate.

Hanson is frank about the attraction of these antique vehicles. The Model A has been referred to as of the simplest mass-produced automobiles to leave the assembly line, and that’s its appeal for him.

“To be truthful, I don’t care for new cars. You can’t work on them.”