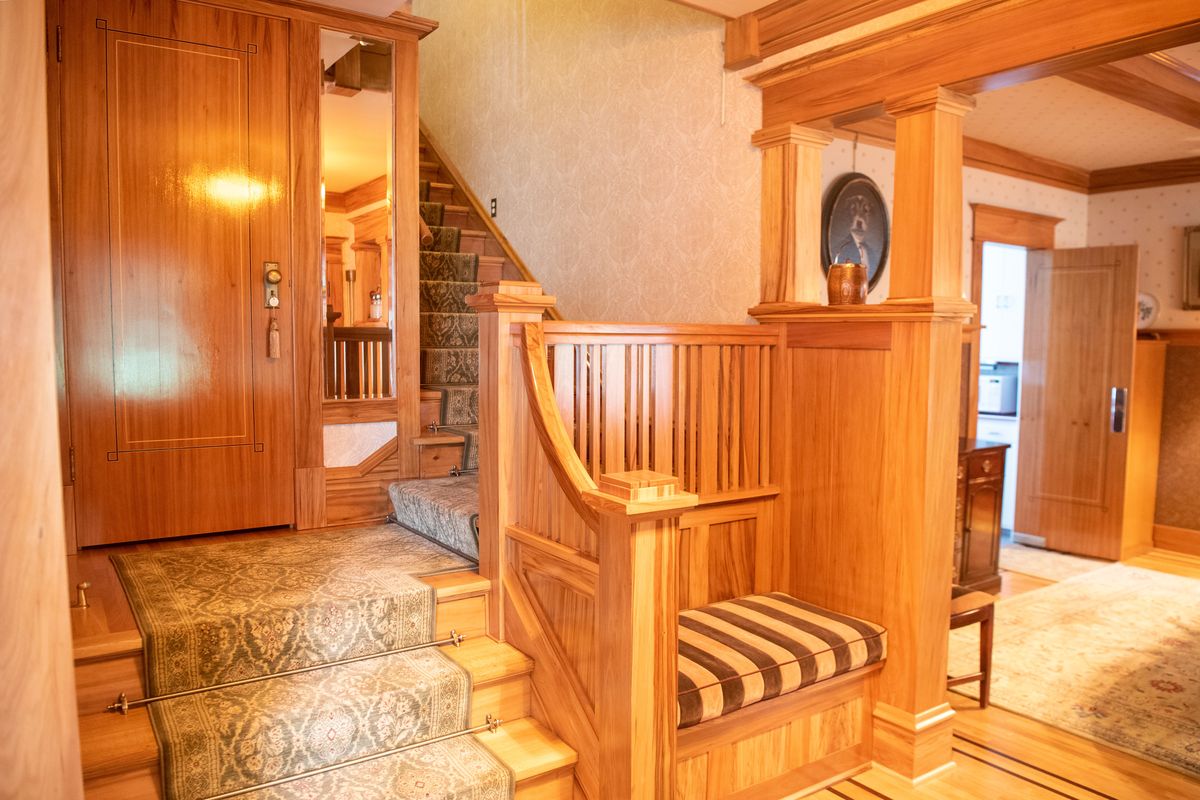 Michael McGarvey, 80, who became a doctor and has lived most of his life in New York City, has preserved his grandparents’ home at 514 West Park Place on Corbin Park, though he only spends his summers there since he retired, shown Thursday, Sept. 15, 2022. He plans to sell the house next spring and donate the proceeds to his alma mater, Reed College. (Jesse Tinsley/The Spokesman-Review)

Children are playing, homeowners are gardening, the mail carrier is humming as he sorts letters and Dr. Mick McGarvey is sitting on the front porch of the home his family has occupied for nearly 100 years.

McGarvey plans to sell 514 W. Park Place next spring and donate the proceeds to his alma mater, Reed College in Portland.

The money will go toward a scholarship in McGarvey’s name that he hopes will provide underrepresented students a chance at a first-rate education, he said.

Michael McGarvey, 80, who became a doctor and has lived most of his life in New York City, has preserved his grandparents’ home at 514 West Park Place on Corbin Park, though he only spends his summers there since he retired, shown Thursday, Sept. 15, 2022. He plans to sell the house next spring and donate the proceeds to his alma mater, Reed College. (Jesse Tinsley/The Spokesman-Review)

The Corbin Park house is an historic Tudor-style home built in 1912 for Spokane Mayor Charles Fleming.

Fleming’s most unique addition to the home was a four-car garage situated on the back of the large lot.

The Flemings occupied the home for a few years after it was built, but eventually they moved out and the home became a “fancy little” boarding house for Gonzaga students, McGarvey said.

The couple lived in the home until their deaths in the mid-1970s.

McGarvey has fond memories of visiting his “Chubs and Pops” at the home as a child.

Rasque was an architect who specialized in public buildings.

He designed the Hargreaves Library building on Eastern Washington University’s campus, the Colfax Elementary School, and what is now the School House Lofts in Cheney but was originally Cheney High School, among a slew of other buildings.

“He decided that if he was going to specialize in public-sector buildings, he better not live on the South Hill,” McGarvey said.

His Pops once parked Buicks in that four-car garage, but after getting a lemon he downgraded to Oldsmobiles instead of upgrading to Cadillacs, McGarvey said.

“His basic attitude was nobody wants to see you drive up in front of a school that’s under construction in a Cadillac,” McGarvey said .

There had been a rift in the family when McGarvey’s mother married Michael M. McGarvey without her parents’ permission, but when her brother died in Okinawa in April 1945, she reached out to her estranged parents. That’s when the young Mick McGarvey began the frequent trek from Southern California, where he grew up, to Spokane for vacations with his “Pops and Chubs.”

“I realized that Reed was so rigorous that when I went to medical school it was a relative cinch,” McGarvey said.

He went on to the University of Southern California for medical school where he became active in the civil rights and anti-war movements.

He was part of creating the Student Health Organizations, a collective of medical students across the country that sought to improve health care services in underserved communities.

After graduating in 1967, McGarvey moved to New York to complete his internship as an internist.

He has lived in New York City since.

After his grandparents died, McGarvey’s parents took a year to redecorate and moved into the home around 1978. The couple lived there for another 30 years until 2008, when McGarvey’s father moved into assisted living. McGarvey began spending his summers in Spokane at the family home when he retired in 2000.

“He said, ‘Mick, we hate to tell you, but there’s water pouring down the side of your front porch and into the street,’ ” McGarvey said.

During a cold snap, the house’s furnace had failed, causing the radiators to freeze.

Once they thawed, they released a torrent of water throughout the house.

Most of the beautiful historic details of the home were destroyed. McGarvey was determined to restore the house to its original glory, and reverse what he jokingly called some of his mother and grandmother’s poorer decorating choices.

He began what turned into a $460,000 restoration project that included leaving the home with new gumwood floors, just like the originals but sitting on a sturdy subfloor and updated plumbing. Lath and plaster walls now cover new installation and electrical wiring.

All of the downstairs rooms have William Morris wallpaper, with extra tucked away for repairs. The light switches look original but now include dimmers.

“The economy was in the tank,” McGarvey said. “So workmen were available and really good quality craftsmen, so we were very lucky with that.”

While he was at it, McGarvey decided to restore the exterior of the home, replacing aging stucco with Hardie board siding, and jacking up the house to replace three structural beams.

He worked with Megan Duvall at the Spokane Historic Preservation Office to restore the home, even painting the house in a historically correct color scheme.

Despite the labor of love restoring the home, McGarvey feels it’s time to let it go.

Donating the proceeds to Reed, McGarvey said, is part of his hope to give underrepresented students the rigorous college experience he had.

When McGarvey created the Michael R. McGarvey Scholarship, he asked that priority be given to Native American, African American and Latino students, as well as Japanese students affected by internment.

McGarvey knows what it’s like to be an outsider. He lived much of his life in the closet before coming out well into his adult life. He has been with his partner, Julian Schoelchere, for 40 years.

“I think being an outsider, of sorts, helps one empathize,” McGarvey said.

McGarvey plans to leave the majority of his estate to the university upon his death.

A generous gift, McGarvey said, is not because of his affection for Reed but “respect for what it does.”