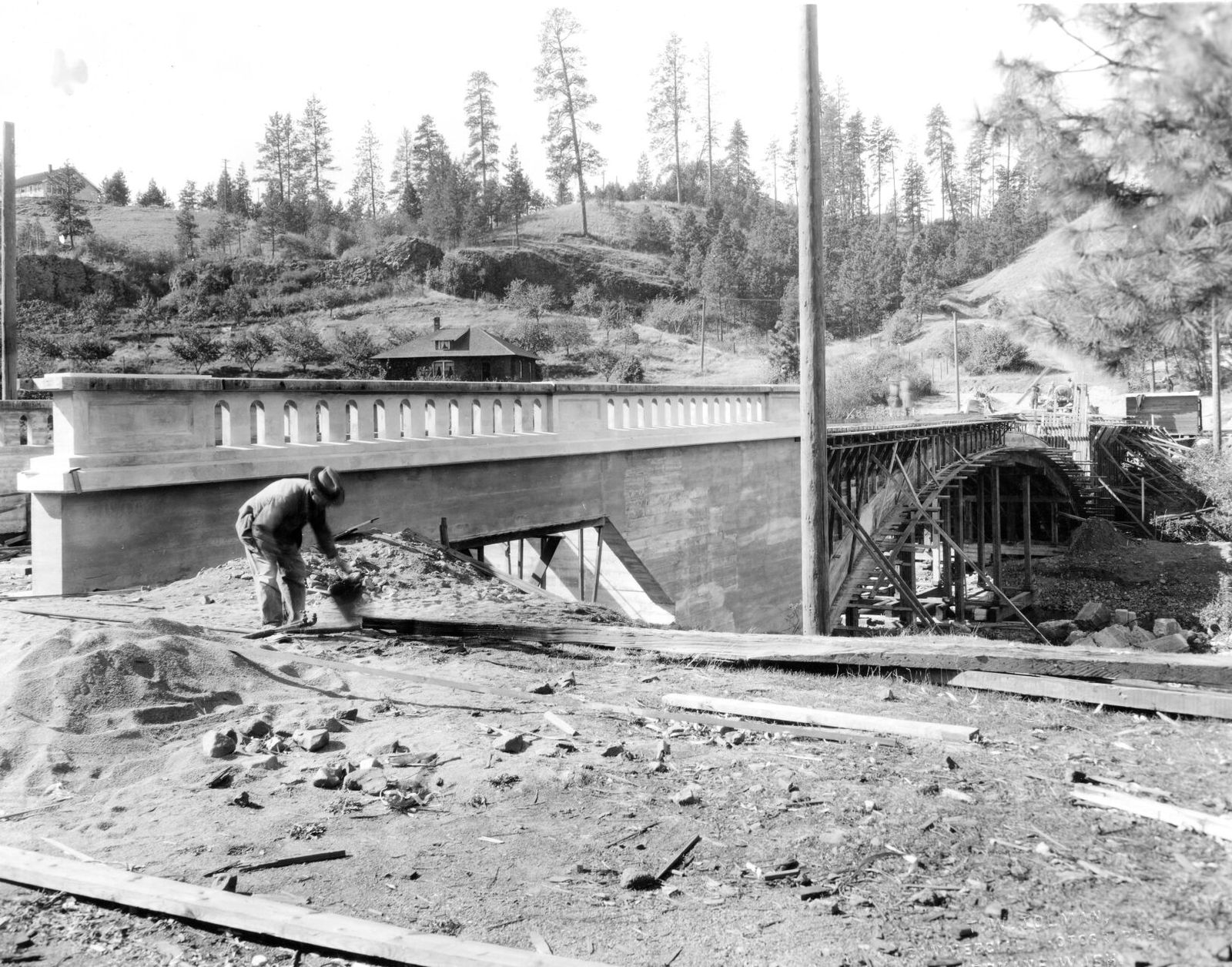 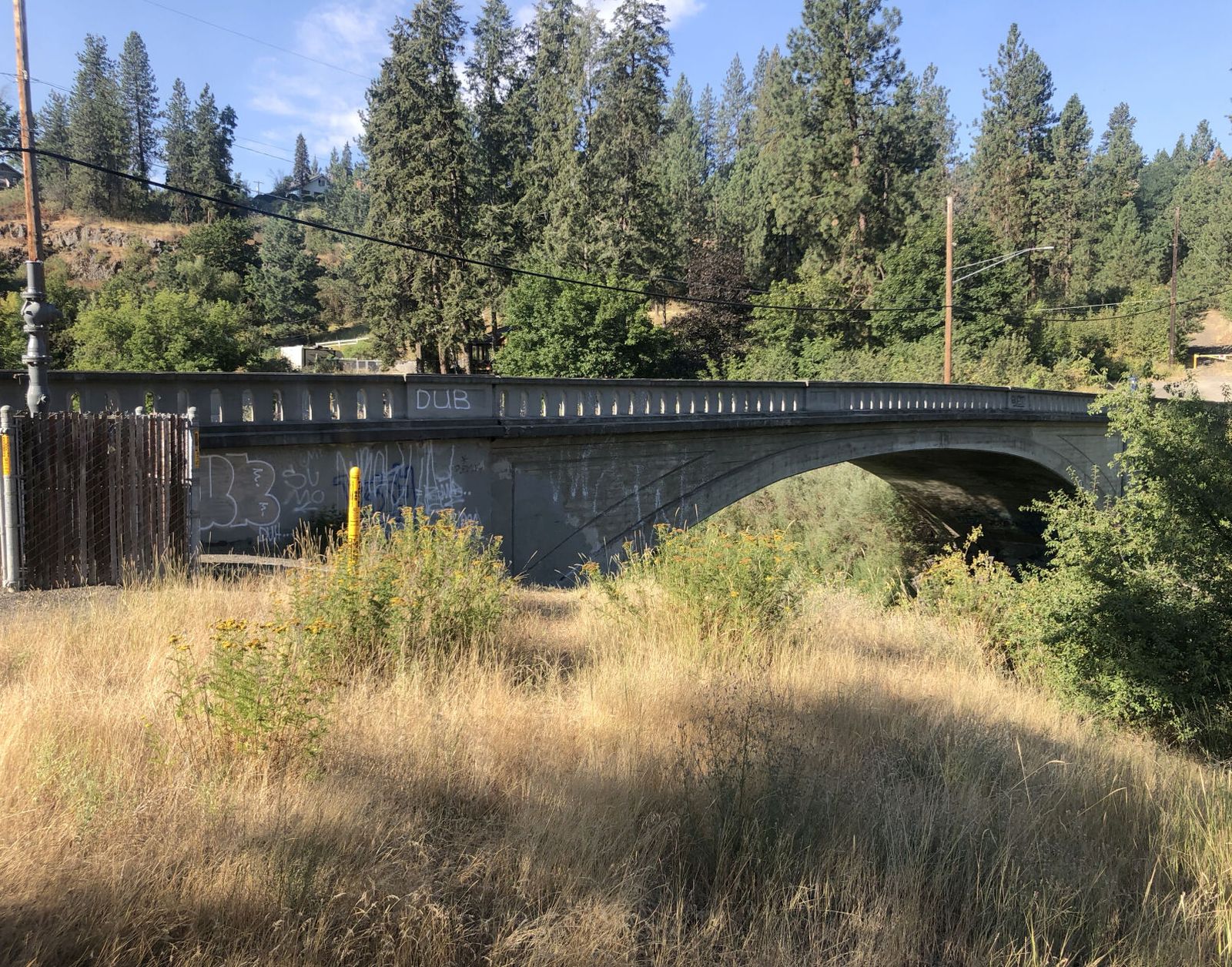 Then and Now: Eleventh Avenue Bridge

The Spokane River divides the city of Spokane, forcing the construction of bridges large and small to keep the city connected.

On a much smaller scale, Latah Creek to the south has presented a similar challenge.

Latah Creek, also known as Hangman Creek, once wound through grassy fields that were home to a village of the Spokane Indians through the 1880s.

It was only a few years after the arrival of city founder Jimmy Glover in 1873 that Joshua R. Stafford arrived from Ohio, homesteading along Latah Creek where he began farming. He saw the potential for a neighborhood on his land, which he platted with streets and home sites in 1888.

Calling the development Stafford’s Addition, Stafford sold home sites there. It wasn’t far to Browne’s Addition, though it was still a long walk uphill to the downtown area. Traffic on Stafford’s streets were horse-drawn buggies and farm wagons carrying people and produce  from Walla Walla, Pullman and Colfax

One of the first amenities Stafford added was a simple bridge across Latah Creek at the south end of his neighborhood. The Stafford Bridge, opened around 1891, was a steel frame with wooden timbers on top.

Stafford’s neighborhood would get a new nickname when the Keller-Lorenz Vinegar Works started up at the corner of Spruce Street and 11th Avenue using old equipment from the former brewery of John F.G. Hieber, which moved to another location in downtown Spokane.

Because of frequent and unpredictable flooding of Latah Creek, the bridge was sometimes damaged by the scouring waters of annual floods.

In 1909, floodwaters washed away one end of the Stafford Bridge while crews worked through the night to protect it by salvaging the deck timbers before they fell into the rushing water.

As the city planned a concrete replacement, the old Stafford Bridge was dismantled and reassembled at the current Eleventh Avenue Bridge site, saving the city $2,700, the cost of a new bridge.

The bridge allowed horse and buggy traffic onto a route going north and west toward Fort Wright, Medical Lake and Cheney.

The city of Spokane, estimating that the salvaged 11th Avenue Bridge carried around 400 people per day, finally replaced it with a new concrete structure in 1927.

1927: The crew from G.H. Weller, a bridge contractor, works on the 11th Avenue Bridge over Latah Creek in Vinegar Flats. As the neighborhood platted by farmer-turned-developer Joshua R. Stafford continued to grow, the city replaced a steel and timber bridge that was damaged and salvaged from another spot on Latah Creek. It was a well-used route for horses and buggies, approaching from the south to get to Fort Wright, Medical Lake and Cheney.

Present day: The 11th Avenue Bridge, tucked away in a corner of Vinegar Flats, is still in use today as a route into and out of the neighborhood, which took shape in the 1890s. The official name of the neighborhood is Stafford’s Addition, but the Vinegar Flats nickname stuck because of the Keller-Lorenz Vinegar Works, which opened in 1890, filled the air with the scent of vinegar and lasted until 1958. The old bridge preserved the horse and buggy route that ran from the neighborhood to areas to the west and north, such as Fort Wright, Medical Lake and Cheney. Once Inland Empire Way was completed, with it's connection to the Sunset Highway on Spokane's west side, the bridge was not as critical, but is still used today to access High Bridge Park and lower Riverside Avenue.