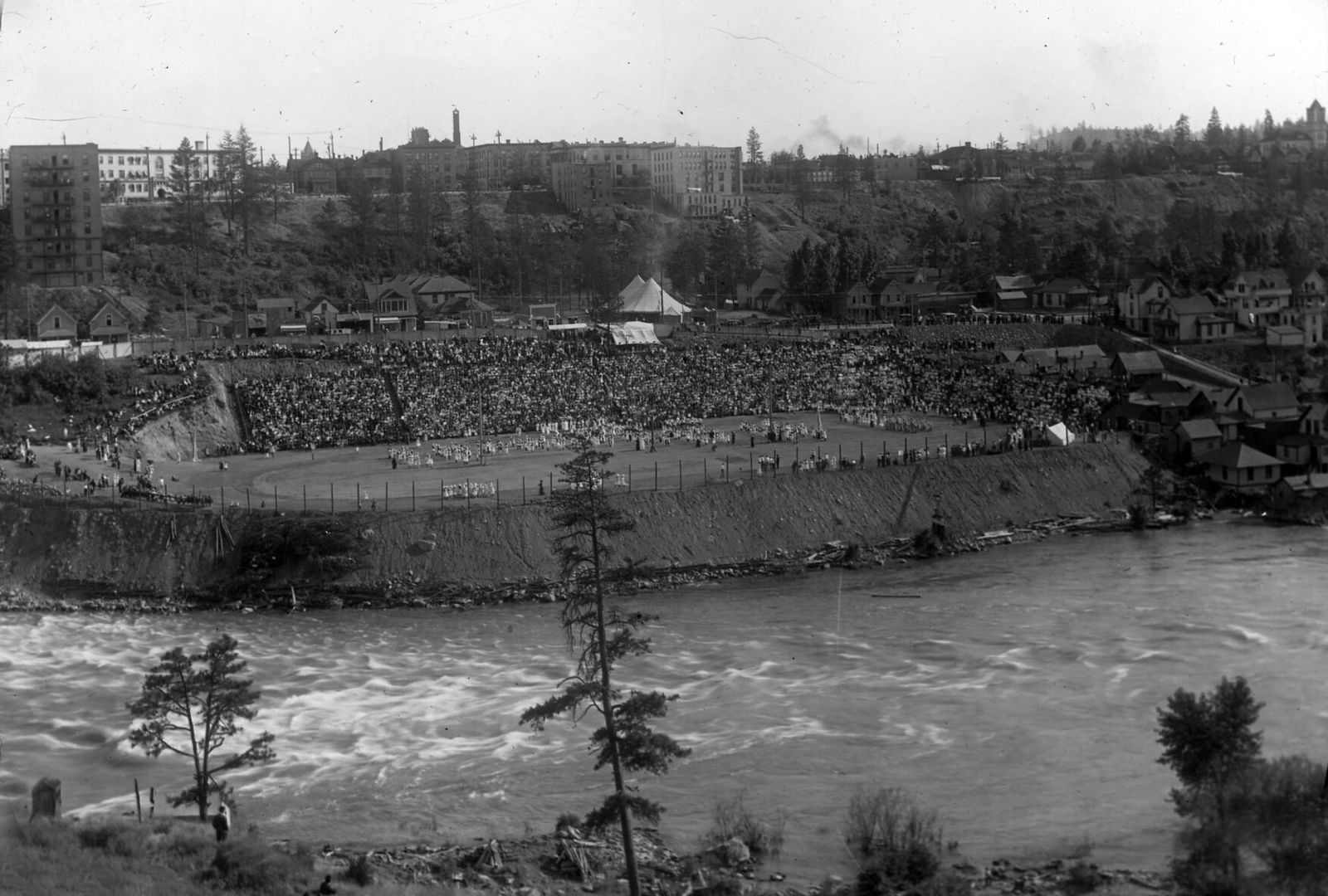 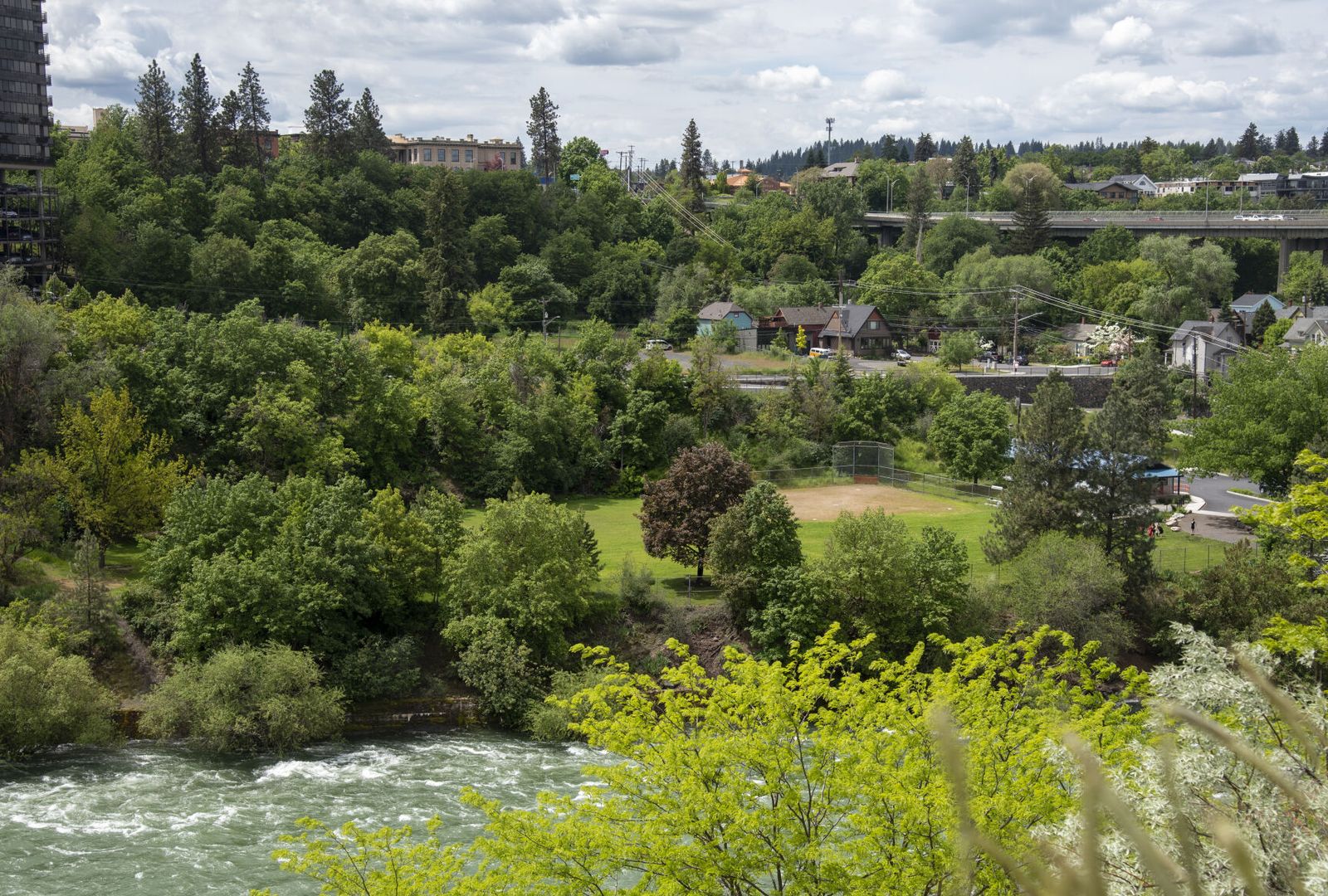 Then and Now: Glover Field

The Spokane Park Board was formed in 1907 to oversee all of the city’s parks and future parkland, develop future parks and take the favoritism out of those decisions.

There were already several formal and informal parks dedicated to various activities, but the board believed that there was a need for an athletic stadium of some kind near downtown. The new board was made up of well-known residents, chosen to alleviate the distrust of citizens as the board began to spend money on the park system.

In 1912, the board approved of spending $25,000 for the parcel of riverside land in an area once nicknamed Poverty Flats, but  later changed to Peaceful Valley. The Park Board felt the city needed a place to host athletic contests for school kids, high school and college athletes as well as for games between social club teams.

Workers carved out a semicircular hillside and lined it with wooden bleachers. A flat play field was formed along with a running track, baseball backstop, football field and other amenities. The hillside was lined with wooden bleachers and the flowing river was the visual backdrop of all the sports on the field.

After five years of construction, the Park Board asked for suggestions for a unique name for the park. The Spokane County Pioneer’s Society, the Ad Club of Spokane and the Chamber of Commerce all agreed that the name “Glover Field” would honor city founder James N. Glover, who was about to celebrate his 80th birthday.

Mrs. W.J. Mackey, vice president of the Pioneer’s Society, said, “We have parks, streets and buildings named in honor of other pioneers, but there is not even an alley named for Mr. Glover, the father of Spokane.”

Many athletic and social events have been held there in the past century. It was a camping area for visiting Native leaders and visitor attending the 1925 and 1926 Indian Congress meetings.

The wooden bleachers were condemned in 1925 and finally dismantled in 1937. By then, most high schools had their own athletic fields. Since the 1930s, the park has mostly been for use by the Peaceful Valley community. There is a community building on the property now.

In 2018, the name of the park and the adjoining Peaceful Valley River Walk was changed to Redband Park at the request of the Spokane Indians baseball team and the Spokane Tribe of Indians, who have cooperated on projects to bring awareness to the plight of the native trout species.

1920s - Seen from north bank of the river, groups of children line up for festivities on Children’s Day at Glover Field, Spokane’s first city-owned athletic field, bought and constructed between 1912 and 1917. Children's Day was an annual holiday, usually in early or mid-June, that was first established by the Unitarians in 1857 and celebrated occasionally over the last 160 years. The holiday has been celebrated in many churches, but also by the city's parks and recreation programs, where it's seen as a way to get kids involved in parks' programs as they are preparing for summer vacation.  The riverside athletic field served as the city and school district’s earliest multiuse athletic stadium.  Today, it still serves as a park for the neighborhood of Peaceful Valley, just a short distance from downtown on Main Avenue.

2022 - Glover Field, a multisport athletic field, still serves the city and the Peaceful Valley neighborhood. It was an important piece of Spokane history as the city’s first multisport athletic stadium, but it fell out of use because the bleachers were dismantled in 1937 and local schools built their own facilities. In 2018, the park and adjacent River Walk were renamed “Redband Park.”