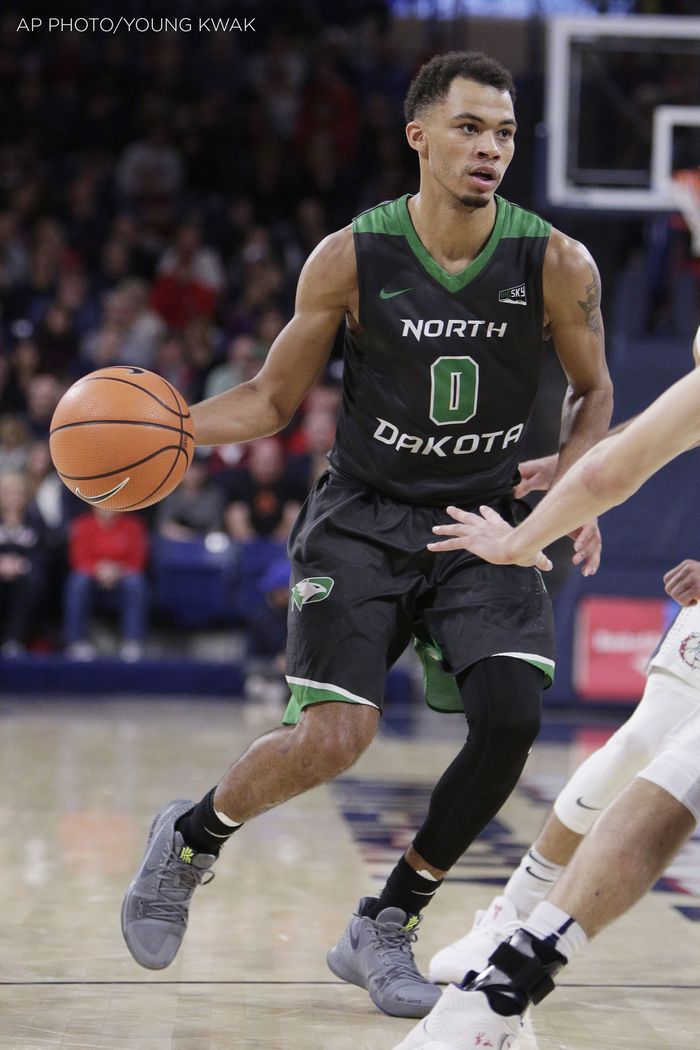 Bio: Three-year starter at North Dakota and two-time, second-team All-Big Sky Conference selection. Averaged team-leading 16.6 points last season and led Big Sky in steals (67). Also contributed 4.3 rebounds and 3.6 assists. Poured in 41 points on 15-of-19 shooting in season-opening win over Troy. Scored in double figures in his last 11 games and 25 times during the season. Tallied 28 points, including a 3-pointer to force overtime, in a loss to Gonzaga. Surpassed 1,000 career points in near upset of Zags. Averaged 15.5 points and 4.4 assists as a sophomore. Second in the Big Sky with 64 steals. Posted 25 double-figures scoring games, twice reaching a season-high 31 points. Scored 17 points in UND’s win over Weber State in the Big Sky Tournament title game. Had 12 points and 6 assists in first-round NCAA Tournament loss to Arizona. Started 27 games and played in 31 in redshirt freshman season. Averaged 10.8 points and 4.2 assists and came up with 59 steals. Made all six of his 3-point attempts and scored 19 points in college debut against Wisconsin. Posted three double-digits scoring games in Big Sky Tournament and had season-high 22 points and eight assists in loss to UC-Irvine in first round of CollegeInsider.com Tournament. Redshirted in 2014-15 season. Helped DeLaSalle High win three consecutive Minnesota Class AAA State championships. Averaged 11 points and 5.3 assists as a senior. Two-time Tri-Metro All-Conference selection.
Sr Scouting report: Grad transfer projected to start or play heavy minutes coming off the bench. All-around talent that brings much-needed experience, ball-handling and playmaking ability to guard line. Can operate at point or shooting guard. Missed first few weeks of practice while completing degree requirements from North Dakota. Officially joined GU’s team in mid October. Adds another perimeter threat after making 41.7 percent of 3-pointers last season and 36.7 percent in three seasons at North Dakota. Ranks 14th on UND’s all-time scoring list, seventh in assists and fourth in steals.

Let’s goooooooooooo @ZachN_23 good things come to those who work! Handled this past year like a PRO and got rewarde… https://t.co/WnxyHLc0mn

Some important minutes from Julian and Dom there toward the end of the half. You don’t have to love what you seen… https://t.co/zYJnmmaMSo

Tweeting it again because why not. https://t.co/YCQ60acB7I

Zags by a million. Every game. I don’t care. This team has just got too much.

Seems like a fitting time to bring this back. 👇🏽 https://t.co/YCQ60acB7I