The names rolled off the tongue like a rap song – though rap hadn't been invented yet. Names like Jim Thorpe, Rafer Johnson, Bob Mathias, Bill Toomey, Bruce Jenner. They were the winners of the Olympic decathlon and they were considered the world's greatest athlete. Read on.

• When I was a younger man oh so many years ago, the winner of the Olympic decathlon held a special place in the sporting hall of fame. When he donned the gold medal after completing 10 events over two grueling days, he was automatically ordained as the best of the best, the world's most dominating athlete. And he was on a Wheaties box within hours. But track and field has faded in the American consciousness (something I lament but really can't explain) and so has the acclaim for the decathlon champion. When Bryan Clay – an American no less; the first American to win the event since O'Brien in 1996 – won the gold medal in Beijing four years ago, it seemed as if the accomplishment was met with a big yawn. And such is the response, seemingly, to Ashton Eaton's feat from London. Usain Bolt wins the 100 and the response is deafening. Lolo Jones doesn't win and the response is pretty loud. But Eaton (pictured) edges fellow American Trey Hardee and the response is, well, tepid. Which makes me wonder. What has changed? Why is the decathlon champion no longer met with laurel wreaths and gold bars? Is the event not considered as tough anymore? Or is it because a guy like Jenner traded his Montreal fame for reality TV disdain, helping to devalue the accomplishment? Did the Nike ad campaign, Dan or Dave, kill it? Whatever the reason, it's sad.

• Can't leave London without pointing out the women's soccer gold medal game between the U.S. and Japan drew 80,203 to Wembley Stadium. Those English love their football, don't they? And we love our American women's team, don't we? 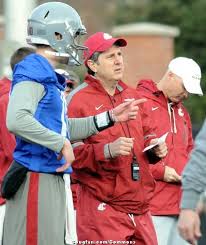 • Washington State: In a lot of ways Mike Leach isn't your typical college football coach. He's not a hulking former defensive lineman or a bespectacled former wide receiver. He doesn't use football-speak to answer every question and he doesn't glare and growl at the media. But he understands the game well enough to know a football coach must be filled with iron at times. He can't bend about certain things on the field. And that iron rang out yesterday at practice, when he spent about five minutes making his point to the offense. Though Leach may not be a typical college football coach, such tirades are typical and usually done with a lot of pre-explosion planning, trying to get the most buck for the bang, so to speak. Christian Caple has coverage of practice in his blog post, in this story for the S-R and, as usual, more in his morning post. Christian also had some Pac-12 Network news for the Pullman area. ... There was a blowup of a different sort in Los Angeles yesterday, when new UCLA coach Jim Mora Jr., said something publicly every UCLA alum I know has said in private. And that's a no-no. On the radio yesterday morning Mora said "When you're talking about UCLA, it's one of the great schools in the world -- not just America, but in the world. It's a safe, beautiful campus in a great area of town. I mean, we don't have murders one block off our campus." You may or may not know there were a couple murders recently near USC's South Central Los Angeles campus, so the comment was a verbal swipe at the Bruins' rival. A not-too-bright swipe actually. Yes, it is a fact that South Central is a tough area and the epicenter of two of our nation's worst race riots. And UCLA is in Westwood, near the gates of Beverly Hills and one of the more upscale areas of the L.A. basin. Pointing out that fact is OK, but to add the last sentence, especially when a couple of USC grad students were murdered near campus just four months ago, was not necessary and needed an apology, which Mora supplied later in the day. ... WSU's volleyball team was picked 11th in the conference in the coaches' preseason poll. ... Sports Illustrated came with its preseason All-American team yesterday and four of the five receivers on the first and second teams were from the Pac-12. ... USA Today examines the windfall that is the Pac-12 Network, but I do believe the newspaper's money projections are a bit low. Each Pac-12 school will make an average of $22 million a year from the new media contract and the Network could add anywhere from $10 to $15 million to that after money is spent to get it off the ground.

• Eastern Washington: Jim Allen is all over the Eagles' first week of practice and posted an after-practice blog post yesterday, followed it up with a story in this morning's S-R and added an early morning blog post today.

• Indians: Another extra-innings game, another Spokane defeat. This one was in Salem-Keiser and came after a big Indian rally to tie the score. But S-K took the 7-6 win in 10 innings.

• Mariners: The M's were traveling from Baltimore to Los Angeles yesterday, so there is no game story to pass along. However, there is this feature on the strong arms in their bullpen and Geoff Baker passes along a radio show about the M's rebuilding plans.

• Seahawks: Terrell Owens (left) may have already gotten the Hawks in trouble. Seems he was in pads a bit too soon, which may or may not bring a response from the NFL. ... The Hawks may have a rookie in the middle of their linebacking corps, but that may be just fine. And they will have a rookie under center in the second half this weekend. ... The first preseason game is with Tennessee and you know what that means: Matt Hasselbeck and Jake Locker.

• Sounders: Though losing in the final was tough, the Sounders can take pride in winning three consecutive U.S. Open Cup titles and coming this close to a fourth.

• Golf: Not only is the PGA Championship going on this weekend, the S-R ran its late-summer golf section today. The story that most intrigued me came from Jim Meehan and it's on Chambers Bay, the site of the 2015 U.S. Open. Chambers is a bucket list place.

• NBA: It looks as if the Lakers will have enough star power to challenge the Heat next season if the Dwight Howard trade goes through as planned.

• We're back on the radio again today. Once again you can listen here between 3 and 6 p.m. We'll be back here in the morning. Until then ...