It's nearly impossible to predict what will kick off a lively back-and-forth between readers. I've quit trying to figure it out. And I know I should just shy away and let the conversation continue without me. But sometimes I can't. Read on.

• There was quite a discussion here yesterday (and this morning) on the merits of the S-R's coverage of the recent American Legion baseball tournament, or lack thereof. It's a subject – high school and youth sports coverage – quite a few people are passionate about. I get that. Heck, I'm one of them. But there are some economic realities that are hard to get around these days. If you have a good memory, you might recall a time not all that long ago (in the early 2000s) when I served as the Review's prep editor. It was a pretty high profile position and the paper was doing much better financially than today. How much better? Well the prep staff included four full-time people: myself, Mike Vlahovich, Greg Lee and, for a year at least, J.D. Larson. Greg handled the Idaho sports, Mike and I the GSL and J.D. the smaller Washington schools, though all of us would overlap some. But that wasn't all. We had a budget that allowed us to hire part-timers on occasion to add depth to the smaller school coverage and to hyper-local sports through the Voices. But you all know what happened. The medium I am using to express these thoughts, the Internet, pulled away a big part of newspapers' revenue sources like a bad magician with a table cloth. Yep, all the dishes crashed to the floor. The budgets had to shrink. We began to cut staff, with J.D. moving out of the newspaper business, Mike retiring and then, after a stint in Pullman, yours truly retiring as well. Thanks to the confluence of a variety of outside forces, not least of which was the recession we have yet to completely shake, the resources were not available to replace the bodies, and never will be. From a gang of four (criticized even then for not covering prep sports enough), there is one left. And Greg not only has to cover preps throughout the area, he's called upon to fill in other places as well. This is not an excuse, it's just a fact. Now it would be easy to say that's all well and good, but if it were a priority, the paper could easily cover the Legion tournament. Sure, if it existed in a vacuum. But it doesn't. The close equivalent of the Legion tournament occurs around here almost every weekend, be it softball – there was a huge tournament this weekend with teams from all over the region in town – or basketball – there is a large tournament almost every weekend at one of the facilities in town starting in May and running through mid-summer – or volleyball or soccer or whatever. In fact, there are more high school-aged events in summer than there are doing the school year. It's just the way it is these days. A prep writer at the S-R, at least during my tenure, usually worked, on average, six days a week during the school year. And that's when we had a flush staff. I can't imagine how many hours Greg has to work these days to get the job done. The summer used to be a time to recharge, to recoup energy needed for the long haul that starts in mid-August. I'm not so sure that's possible anymore.

• One other thing about this. Like a lot of you, I would love to see all the Legion linescores in the paper each day as it seemed to be in the past. One of the reasons I became a catcher more than 40 years ago was to see my name in print after every game (spelled a variety of different ways over the years, from Grippi to Grippe to Grippee to Griffey to, my favorite, Gripe). But priorities have changed and not just at the paper. Even when I was working in Southern California more than 30 years ago, running down summer results oftentimes was like pulling teeth. Some coaches were meticulous in calling in their games; others could care less. Now, according to folks I talk with at the paper (and I have pretty good connections), calls and emails are less frequent. It doesn't seem as important to the coaches or players that the linescore appear in print anymore. It's more important that it show up somewhere on the Internet, so there can be a Facebook post or a text to their friends. Seeing the results in print doesn't seem to be a priority. Which is too bad for those of us who still have clips of either our games or our children's. But for a new generation, this is normal. If it is on the web, that's enough. Could it be argued there is a vicious circle, with everyone pointing fingers at another party ("if they cared more it would happen") for the change? Sure, but would good would that do? Times change. What was once the norm is no longer. In five years, something else may come along and make today seem like "the good old days." So be it.

• Indians: No matter what level you are playing at, winning four games in a five-game series is impressive. That's what the Indians just did against Eugene. Chris Derrick has a story and a blog post on how Spokane took last night's game 2-1.

• Preps: Greg has the weekly youth sports notebook, which leads with the aforementioned softball tournament. 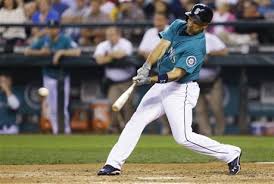 • Mariners: I don't want to get all premature or anything, but it seems as if the Mariners have turned something of a corner. They have won five of their last seven games, the most recent an 11-4 rout of Boston last night at Safeco. Of course, Felix was pitching, so 11 runs weren't needed, but the bats have seemed to come alive a bit, including that of Justin Smoak. ... The M's made another roster change yesterday, ending the Jeremy Bonderman experiment (he was designated for assignment) and bringing up Lucas Luetge to fill a bullpen hole for a few days. But Erasmo Ramirez seems to be the guy the M's will recall to start Thursday's game against the Red Sox. ... Raul Ibanez (pictured hitting a homer last night) is enjoying himself. With 22 home runs already, why not? ... But will he be part of a late-July fire sale?

• Sounders: The Sounders have not played well this year on the road. ... Brad Evans is becoming part of Seattle's history.

• Seahawks: Not only have the Hawks sold out their games, they are well on their way to selling out their preseason practices. Yep, the practices.

• By the way, I was not trying to minimize in any way folks' opinions, thoughts and memories. Everyone is entitled to those. I just wanted to add some background information to the discussion. Until later ...