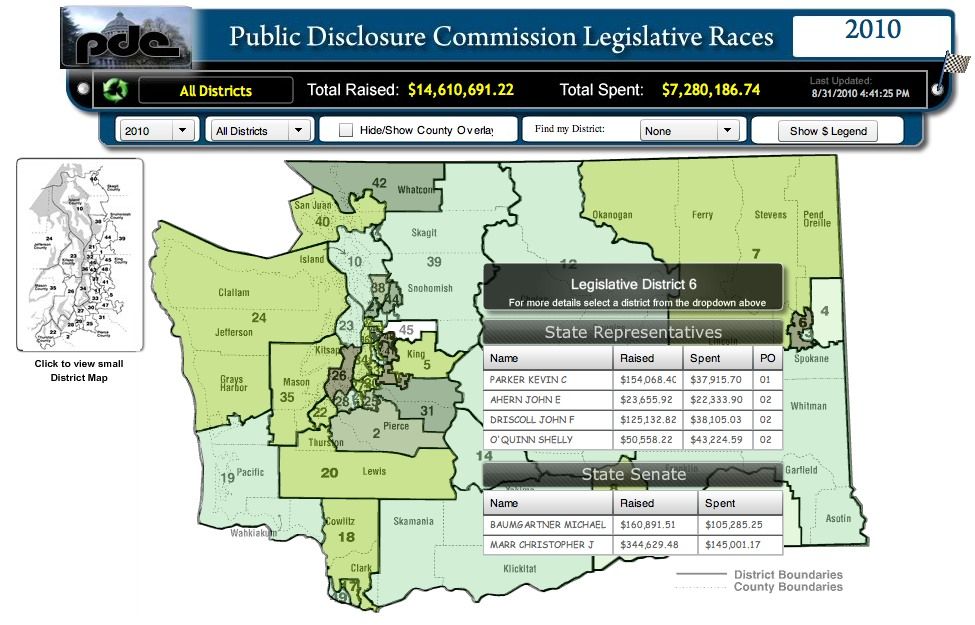 Click the image for the PDC’s interactive campaign spending map.

A Spokane legislative district tops the state for money raised by candidates, and is near the top for spending that money before the August primary.

The 6th Legislative District – which curves around central Spokane’s core from the Whitworth area to the South Hill – is often a pricey political battleground. Its last three state Senate races have been the three most expensive in state history, with the 2006 contest between Democrat Chris Marr and Republican incumbent Brad Benson at the top of the list. Nearly $818,000 was spent in that race for a seat that pays just over $42,000 per year.

This year is likely to follow that trend as Marr, a first-term incumbent after unseating Benson, faces a challenge from Republican Mike Baumgartner. Marr so far has raised more than $338,000, putting him in second place among all legislative candidates; Baumgartner is 11th with $158,350.

“I make the argument that it’s the swingiest of districts,” Marr said this week. “It’s a traditionally Republican district where the seats have gone back and forth in recent years.”

Baumgartner believes money is pouring in because several races are competitive, and the district is considered important: “If Republicans are going to make significant gains in the Legislature, they’re going to have to win in the 6th.”

Candidates in the 6th may be benefiting from a fact of political life in most states, said Blaine Garvin, a Gonzaga University political science professor. It’s one of just a handful of “competitive” districts in which the outcome for one party or the other is not a foregone conclusion.

“You just can’t draw a map of 49 districts and have most of them be competitive,” Garvin said. It’s hard to find a Seattle district where a Republican can win or a rural Eastern Washington district where a Democrat can win because political preferences are not evenly distributed around the state.

Todd Donovan of Western Washington University agreed: “The parties are going to throw their money where they think the close races are.”

Boosting the 6th District to the top in total contributions is freshman Republican Rep. Kevin Parker, 12th among all legislative candidates with $154,000 raised. But unlike all other candidates in the top 12, Parker is running unopposed this fall and his re-election is all but assured.

Yet he’s raised about $34,000 more than Democratic seatmate John Driscoll, who is locked in a rematch with former state Rep. John Ahern. Republican Ahern, who finished ahead of Shelly O’Quinn in the recent primary, is the only general election candidate in the district not in six figures; he’s raised a relatively paltry $23,500.

Parker believes a combination of factors makes the 6th District high-profile and high-cost. Along with competitive races and a recent history of electing Democrats and Republicans, both parties are working for any advantage on redistricting, which will begin next year. District lines will be redrawn by a special panel, but the Legislature must approve the final plan. Being in the minority in both houses, as Republicans are now, would make it hard to block a plan they think is weighted against them.

Although much of his money was raised prior to filing week, when a freshman legislator could reasonably expect a challenger, Parker said he is surprised contributions have continued: “We didn’t expect to raise this much money.”

Even an unopposed candidate needs to get his message out, said Parker, who like the others was knocking on voters’ doors this week. He’ll said he’ll spend some on advertising and give some to other candidates who support his views on helping businesses and increasing jobs.

While all candidates have a long list of small to moderate contributions from local sources, many of their large donations come from outside Spokane.

Marr has $1,600 – the maximum allowed by law for individuals and political action committees – from an array of groups that represent accountants, unions for service workers and electricians, teachers, state troopers, restaurant owners and tribal gaming interests.

Parker shares some donors with fellow Republican Baumgartner, including McMorris Rodgers’ PAC, homebuilders and the insurers’ PAC; but he also has some of the same donors as Marr, including Avista and Anheuser-Busch, the teachers union PAC and the restaurant association. The beverage association and the Kalispel Tribe are both giving to Parker and Driscoll, and health care companies and political action committees are contributing to all the campaigns.

The final tab for each candidate, each race and the district as a whole won’t be known until sometime in December. Marr and Baumgartner both said, however, that spending in the Senate race alone could approach $1 million, particularly when “independent expenditures” – ads for or against a candidate sponsored by an outside group – are added in.

That would likely set another record. It would also be an amount unthinkable just a few years ago, said Donovan, the WWU political science professor: “A decade ago, that would be what you’d spend on a race for Congress.”