A GRIP ON SPORTS • The preliminaries are over. The flotsam out of the way. It’s time for the real deal. The big game. Well, make that the big games. Read on.

• The rest of the Pac-12 football schedule was just a run-up to tonight, wasn’t it? No matter how you look at it, if the Washington Huskies don’t win the Pac-12 title tonight in Santa Clara, the season has been a failure.

For the entire conference.

Yes, I said it. It won’t just be the Huskies that fail tonight, if they do. It will be the conference’s second consecutive season of failure.

See, with the advent of the College Football Playoffs (all caps please), the only thing that matters in college football (lowercase) is the four-team tournament. And who is in. Heck, if you even are a casual watcher of ESPN – I’m guessing you folks are more than casual watchers – you know the drill. Every week we find out “who’s in.” Except we really don’t until this weekend.

Remember a couple years ago when TCU was in, until it wasn’t? Or last year, when the mighty Pac-12, the holder of the West Coast football flame, was denied a seat at the adults’ table. Stanford just wasn’t good enough in the committee’s eyes. (I blame Mark Helfrich because, well, just because.)

The conference vowed being shut out wouldn’t happen again. Enter stage left the Huskies, holding the Pac-12 banner. Undefeated until USC rode north and almost derailed the Santa Clara-bound train. Thankfully, for the conference, UW got its act back together and rolled through the rest of its schedule, including those puny rivals from Pullman.

Now upstart Colorado awaits. A Washington win puts the Pac-12 were it belongs. A Buffs win? Don’t even think about it. Colorado is not going to the playoffs. Win or lose, the best it can do is the lowly Rose Bowl.

For every extra team the conference places in a New Year’s Six bowl, it gets about $6 million dollars, so it’s not just pride at stake. It’s money too. So when you are watching tonight, keep that in mind.

And root for your team’s wallet, no matter who that team might be.

• There is another big game on tap this weekend. That would be Saturday. The 7-0 Gonzaga Bulldogs face their West Coast rival, the Arizona Wildcats.

Mark Few and Sean Miller have made this matchup between the two western powerhouses an annual affair, meeting at home, sure, but also up and down the coast.

This year’s game will be in Anaheim and televised on ESPN. And it will be another big deal.

The Wildcats aren’t undefeated, though, and are dealing with more injuries and whatever – star guard Allonzo Trier has yet to play this season and no one will say why – than a college team should have to. But that doesn’t knock a lot of the luster off the game.

It’s still the game of the year for the Zags. Until next week. When the Huskies come to town.

WSU: Jacob Thorpe and I rarely agree on anything. Not politics, not music and certainly not who is going to win the Pac-12 title game. He’s got Washington and I have, wait, I have the Huskies too. So we do agree. Darn it. Well, I think it should be a closer game. So we disagree about that. … The WSU volleyball team won its first-round NCAA match and will face third-seeded Wisconsin. 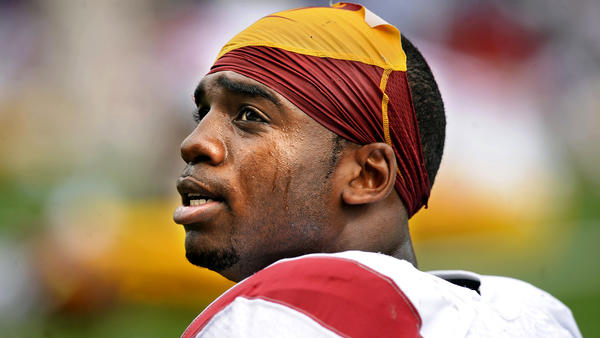 Elsewhere in Pac-12 football, most of the storylines around the conference title game cover one of two subjects: Colorado coach Mike MacIntyre and the long road he and the Buffs have followed to get here; or how the Huskies have risen from the depths to be on the doorstep of greatness. So, in other words, all the stories are about redemption and rebirth. Sort of biblical. Then again, all great stories have their roots there. I’m sure there is something somewhere about airlines giving away free tickets. … My first year covering the Cougars, I watched as Pete Carroll’s Trojans pounded them in the Coliseum by. I walked up the tunnel from the field next to a USC linebacker, No. 5. At least I thought it was a linebacker. A large linebacker. But the Trojans had double numbers. The “linebacker” took off his helmet. It was running back Joe McKnight (pictured). He was bigger than some of the WSU defensive ends. What a unique talent. He was shot and killed yesterday in Louisiana. How sad. … So where is UCLA headed? … Around the conference in basketball, USC received some relatively good injury news. … Utah defeated Montana State, giving Larry Krystkowiak his 100th win at the school. … Beat-up Oregon State lost at Mississippi State.

Gonzaga: The Bulldogs warmed up for the Arizona game with a somewhat sloppy 97-63 win over visiting Mississippi Valley State. Jim Meehan has the game story, which includes links to the postgame interviews. Jim also has the keys to the game. … The Delta Devils are on the road playing for guarantees and helping to keep the athletic department afloat. Whitney Ogden has a story on their travels. … Michael Gulledge has a piece on the big heads you see in the stands. … I chipped in with my TV Take and Dan Pelle has a whole bunch of photographs. … Nigel Williams-Goss has found a home in Spokane.

EWU: It’s a big Saturday for the Eastern football program as well, as the Eagles open their run toward an FCS title by hosting Central Arkansas. Jim Allen took the opportunity to look at Roos Field, its history, where it fits in the landscape nationally and where it is headed. … Jim also held a live chat yesterday. Here is the transcript. … Around the Big Sky in football, tomorrow is also a big day for North Dakota. … Southern Utah has next year’s schedule set.

Indians: Now this is shocking news. After 10 years, Tim Hulett won’t be back with the Indians next season. The Rangers announced that yesterday through the Indians, saying in a release Matt Hagen would be the new manager. Josh Horton takes with Hulett and has this story.

Preps: With the Washington state football titles on the line this weekend in the Tacoma Dome, Greg Lee has a couple features to get you ready. He has one on the formula for Liberty’s success and one on an Odessa-Harrington player who has sacrificed for the team’s success. … We can also pass along a roundup of yesterday’s prep action, a look at what Bloomsday is doing for local cross country runners and the lists and pictures of the fall all-league teams.

Seahawks: Earl Thomas couldn’t play last week. He didn’t travel. At least not to Tampa. … Thomas will play this week, though Rob Gronkowski is out a while for the Pats. … The karma Richard Sherman alluded to? It’s not true. … K.J. Wright is having a great year. … Last week was bad but in the past.

Mariners: It looks as if the M’s have reached an agreement with a left-handed reliever I won’t even try to spell. OK, I’ll try. It’s Marc Rzepczynski. I admit, I cut-and-pasted it.

Sounders: Seattle will be playing for an MLS title. Brad Evans has taken a bit of a backseat in the run but in true UC Irvine alum fashion, he’s doing the team thing. And Zach Scott, in true Gonzaga alum fashion, is battling to the bitter end. … Herculez Gomez wants a title for a lot of reasons.

• There is a good chance we won’t be here tomorrow. We have an early morning event to be at and there is little chance we’ll get started early enough to have a column available. If we do, we do. But I can’t guarantee anything. Until later …