Editor’s note: This story has been changed from its original publication with an updated and corrected graphic and tax calculator.

Republicans have set their legislative sights on an ambitious tax reform agenda they say will simplify the tax code while providing a break for middle-class families.

Many details are yet to be determined, but here’s an overview of what the plan looks like.

The president’s plan would consolidate the existing seven tax brackets into just three, lowering the tax rate for the wealthiest Americans while raising it slightly for people at the bottom of the scale.

Republicans have said those changes would be offset by nearly doubling standard deductions, which are mostly taken by low- and middle-income taxpayers, while removing other types of deductions from the tax code so those in the higher-income bracket would owe taxes on more of their income.

Trump’s nine-page outline of the plan didn’t include the income brackets each rate would be applied to, but it likely would be close to a similar three-bracket plan introduced by House Republicans last year.

Household of four with home

How might President Donald Trump’s proposed tax reforms affect you and your family? We chose four household income levels that fall into the proposed tax brackets. Each is based on a household with two people filing jointly with two dependents entered into The Spokesman-Review’s tax calculator, which takes into account other variables. 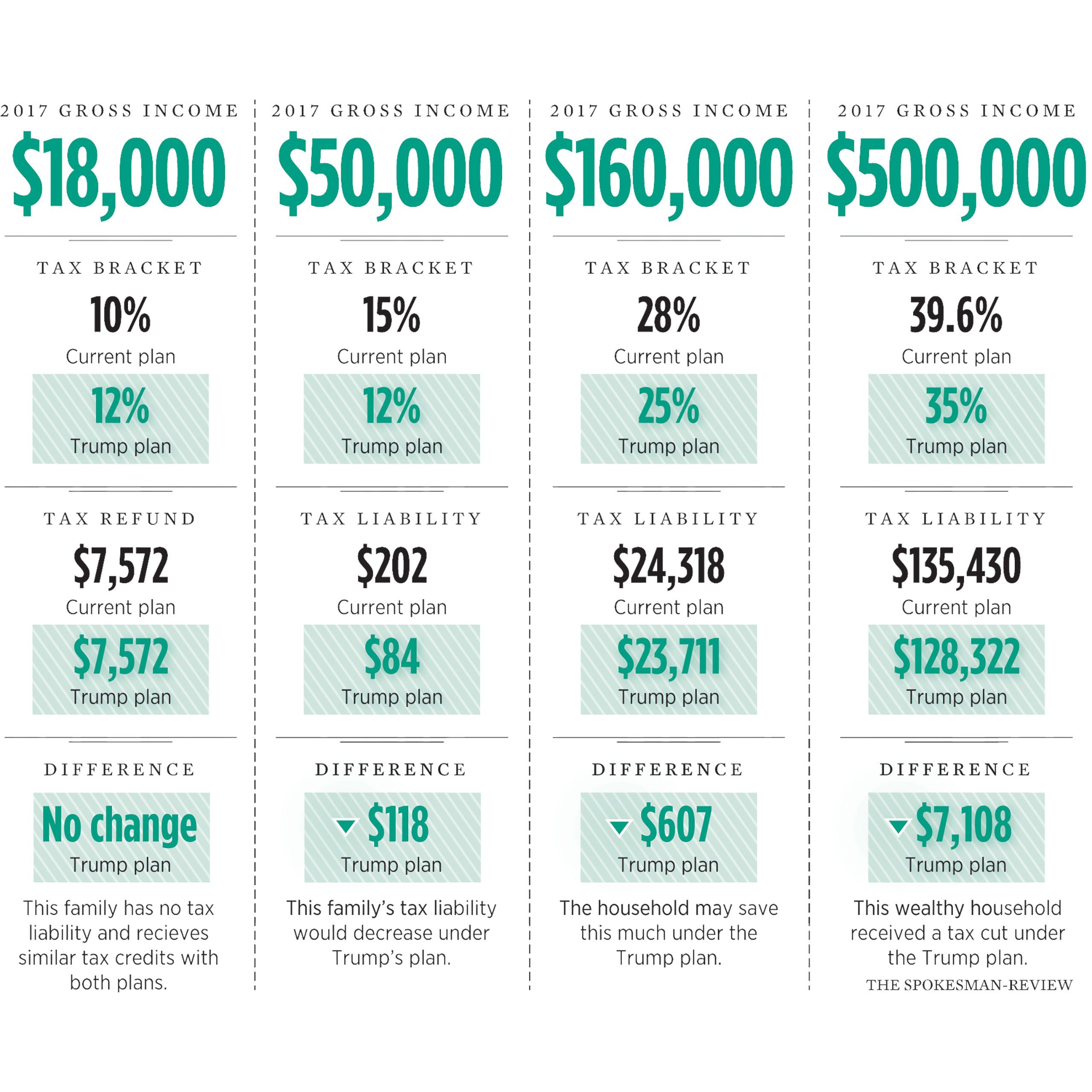 That’s a significant discount for the wealthiest taxpayers, who are currently taxed 39.6 percent on income above $418,401 for an individual or $470,701 for a couple.

The outline says a fourth bracket for high-income earners may be created but did not specify a rate.

This calculator is designed for people who take the standard deduction on their taxes based on income from a job or W2. We’ve factored in the earned income tax credit and child tax credit, but no other credits or deductions.

Under current law and the new tax bill, you can deduct up to $2,500 of student loan interest off your taxable income. If you take this deduction, subtract that amount before entering your total income.

This calculator factors two of the most common tax credits taken by low income families: the Earned Income Tax Credit and the Child Tax Credit. We’ve added the new family tax credit included in the tax bill. Any other credits you’ve taken on your taxes will affect the accuracy of these numbers.

If you receive a credit for eligible tuition expenses, that number would be subtracted from your total tax bill under both current law and under the new tax plan.

The individual tax portions of the bill, including higher standard deductions and lower tax rates, are set to expire in 2025. After that, your taxes should look something like they do now.

For the sake of simplicity, we’ve assumed all income you entered at the top is earned income, rather than income from sources like social security. If your income is from a source other than a job, it might affect your eligibility for these credits.

The plan also calls for simplifying the tax code by eliminating many of the deductions and exemptions that currently exist.

McMorris Rodgers says GOP tax plan is a ‘must,’ but critics warn of rising deficits

Republicans have billed the doubling as a “zero tax bracket,” and say it would offset the slight increase in the bottom tax rate from 10 percent to 12 percent.

The change could hurt families with many children, since married couples will be limited to a new $24,000 deduction, rather than receiving an additional exemption of $4,050 per child. Trump’s plan said it will increase the Child Tax Credit to offset this, but did not specify by how much. The plan also promised additional middle-class tax relief.

People with higher incomes typically itemize deductions, while people with middle and lower incomes often take the standard deduction. A Washington Post analysis of 2015 tax returns found breaks for state and local taxes, which the Trump plan would eliminate, overwhelmingly benefit rich taxpayers. So did deductions for mortgage interest and charitable giving, which the plan would keep.

Many details of the plan, including what would happen to the Earned Income Tax Credit and other credits commonly used by working-class families, are not yet clear.