A GRIP ON SPORTS • Reform is all the rage around NCAA basketball these days. Committees here, committees there, all devoted to “cleaning up” recruiting practices. But the root element of the problem isn’t being addressed. Won’t be. Like everything else, the bottom line is, well, the bottom line. Read on.

• If you’ve not been sleeping under a boulder for the past few months, you know the NCAA has been rocked by FBI arrests of assistant basketball coaches, indictments, press conferences and more dirt than came out of the Grand Canyon. 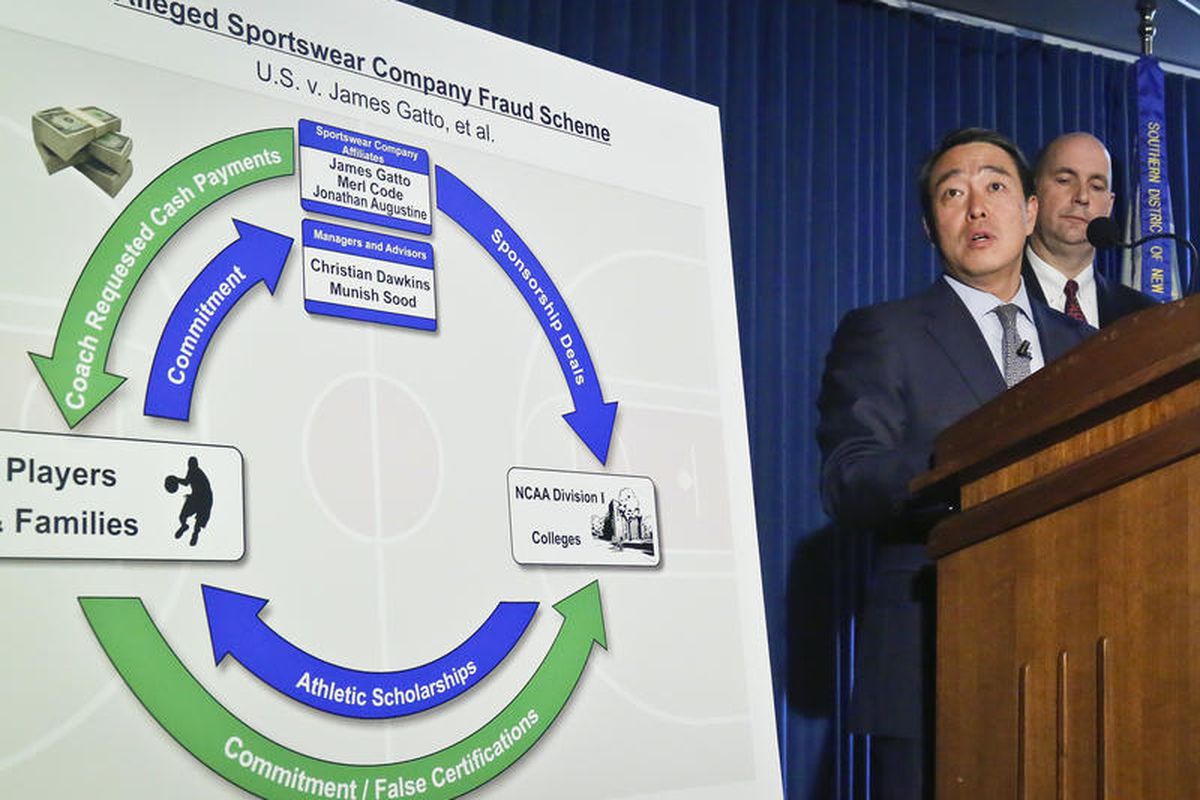 And, after a brief period, the sport will march on, probably wearing Nike or Adidas shoes.

In totally related news, the University of Washington is about to sign a new apparel deal with either Nike or Adidas. It should bring in somewhere in the neighborhood of $8 million a year for the Huskies.

Even in Seattle, with its over-inflated housing market, that’s a nice neighborhood.

How are the two news items related? Let me connect the dots for you.

Money drives all the problems in the world, right? The need for it, the lack of it. Basketball recruiting – all college recruiting, actually – is not an outlier here. The big apparel companies, Nike, Adidas and Under Armour, give money to schools not out of any altruistic sense of generosity. They do it to make money. People like Washington, they buy Washington gear and it’s licensed by (and fills the coffers of) whoever owns the rights.

The same thing happens with individual players. The big three spend money on youth basketball not just to help the underprivileged (though that happens at times), but mainly to build brand loyalty with budding superstars. A relationship with the next LeBron James begins in middle school these days, with money funneled through the possible superstar’s select or high school program.

(The Oregonian has been publishing a series of stories on this strategy recently. It’s worth reading, mainly was a way of understanding the why behind all the money the apparel companies pour into hoops.)

And this is the breeding ground where the corruption begins.

It’s not all that new. Heck, George Dohrmann wrote a book about it, “Play Their Hearts Out,” almost a decade ago. But it is getting worse.

Which makes it tough on the NCAA. If the organization is serious about rinsing away corruption in recruiting, the apparel companies’ influence has to be addressed – and limited. And yet, those same companies are multi-million dollar partners with the organization’s members.

The apparel money is the difference these days for some schools. It allows them to pay an assistant football coach a million dollars a year or an administrator half that or a basketball player, well, basically nothing. But still, $8 million a year isn’t money any school wants to give up.

So do you really believe the NCAA will shred that ATM card to help clean up its basketball industry? Me neither.

Other reforms will be proposed. There will be lip-service paid to “working” with the apparel companies to clean up the process. Nothing will change, other than the transactions will be hidden better.

And somewhere some school, Alabama maybe, will sign a contract with an apparel company that will pay it $20 million a year. Enough to make sure the Crimson Tide can afford a whirlpool bath in every basketball player’s dorm room. And still the relationship won’t be clean.

It’s now a cliché, but, like most clichés, it is also true. Someone usually makes a big move on Saturday, oftentimes with an eagle at 13. Who will it be today?

I know who CBS is rooting for. That would be one Tiger Woods, who barely made the cut at 4 over. A 65 by the world’s most recognizable golfer would certainly help the network’s Sunday ratings.

After all, Patrick Reed and Mark Leishman don’t move the Nielsen needle much. And if you wondered “who,” you proved my point.

Gonzaga: The Bulldogs opened a home WCC series with Portland last night, winning 6-4. Whitney Ogden was there and has this story accompanied by Jesse Tinsley’s photographs. … David Stockton will finish out the season with Utah. Jim Meehan has the story.

WSU: A couple of close losses in Eugene dropped the Cougar baseball team’s record to 3-8 in the Pac-12. … Klay Thompson has a faithful companion. … Elsewhere in the Pac-12 yesterday, Washington practiced and football coach Chris Petersen spoke. Both are important. … Oregon State practiced yesterday as well. … Oregon will scrimmage in Portland today. I wonder if it will rain. … Spring is the time to write about redshirts, at least at Utah. … The coaching staff at Arizona is all new. … Arizona State’s Herm Edwards is going to do it his way. … On to basketball, where Pac-12 rosters will be hit hard this offseason. … Rivalry games are hard to schedule. … Finally, this one hurts. One of the heroes of my youth, a guy I watched play (and worshiped) in Pop Warner, died yesterday. (We played in the same program for the same coach.) UCLA running back James McAlister was a stud in two sports.

EWU: The interim athletic director, Lynn Hickey, tells Jim Allen she is impressed with the quality of people in the department. Just think how impressed she must have been before so many of them left.

Whitworth: Twenty-four years turned out to be enough for Helen Higgs. One of the most likable basketball coaches in the area, Higgs stepped down yesterday. Jim Allen has the story on Higgs’ decision to leave her post. She will be missed.

Chiefs: It’s time to look back on the season. Kevin Dudley does that in print with this story and Larry Weir does that on his Press Box pod, talking with Mike Boyle, the team’s play-by-play voice. … Portland went into Everett last night and surprised the Silvertips with a 5-2 win, taking a 1-0 lead in their WHL series.

Mariners: Edwin Diaz has a 100-miles-per-hour fastball. He has a sharp slider. And he has doubts. … Questions are good. Answers are better. … A week is over. What did we learn? … Robinson Cano’s contract is still a thing in New York. … Gene Warnick riffs on the bald eagle playing with James Paxton in this Out of Right Field column.

Seahawks: The Hawks seem to be looking to build depth at the middle linebacker spot. … The Rams are loading up. Can Seattle stay up?

• God is smiling on me today. He sent rain clouds our way with the sole purpose of giving me an excuse to stay safely inside and watch the Masters all day. Thanks big guy. Heck, who said good things only happen to good people? They happen for me occasionally as well. Until later …