PULLMAN – Twenty-eight NFL teams were in attendance, meaning only four of them passed up a trip to Pullman for Washington State’s Pro Day, held Wednesday morning inside the Cougars’ weight room and indoor practice bubble.

Most of the camera lenses and notepads were huddled around WSU’s “big three” – left tackle Andre Dillard, quarterback Gardner Minshew and running back James Williams – but 11 other Cougar players, as well as Eastern Washington’s Nsimba Webster, also went through strength tests, speed drills and position-specific work, hoping to boost their chances of landing a spot on an NFL roster.

Dillard was the main attraction, even though he opted not to retest any of the drills he completed at the NFL combine last month in Indianapolis. Minshew followed suit and Williams’ workout was truncated, as the running back just went through the bench press, broad jump and vertical jump, in addition to positional drills.

Those three have gone through the most important, and stress-inducing, phases of the predraft process – Minshew and Dillard competed in the Reese’s Senior Bowl before linking up with Williams at the combine – and now will wait three more weeks to learn their NFL fate.

So, while nerves aren’t completely settled yet, the tail end of the festivities had to be fulfilling.

“I’m glad all this is over, because I’ve been stressing,” Williams said. “I’m about to stress a little bit more just being curious where I end up. But I don’t care where I get drafted. Even if I don’t get drafted, I just need an opportunity. That’s all I need.”

Below are five takeaways from WSU’s Pro Day.

Panther on the Palouse

The majority of those wearing NFL fleeces and sweaters were club scouts, sent to Pullman to gather information on players and report back to front office brass.

Dillard is thought to be one of the best offensive linemen available in the draft – and the top O-tackle, according to most mock boards – and the Panthers have a first-round pick, at No. 16.

Hurney left the practice bubble shortly after a brief chat with Dillard.

“I was just honored for him to be here with us,” the offensive lineman said, “and it felt really good to put on a little bit of a show for him. Just feel honored.

“He’s a normal guy, just like everybody, but it’s great to meet him for the first time and it felt really good to talk to him. It felt amazing to hear kind words from him.” 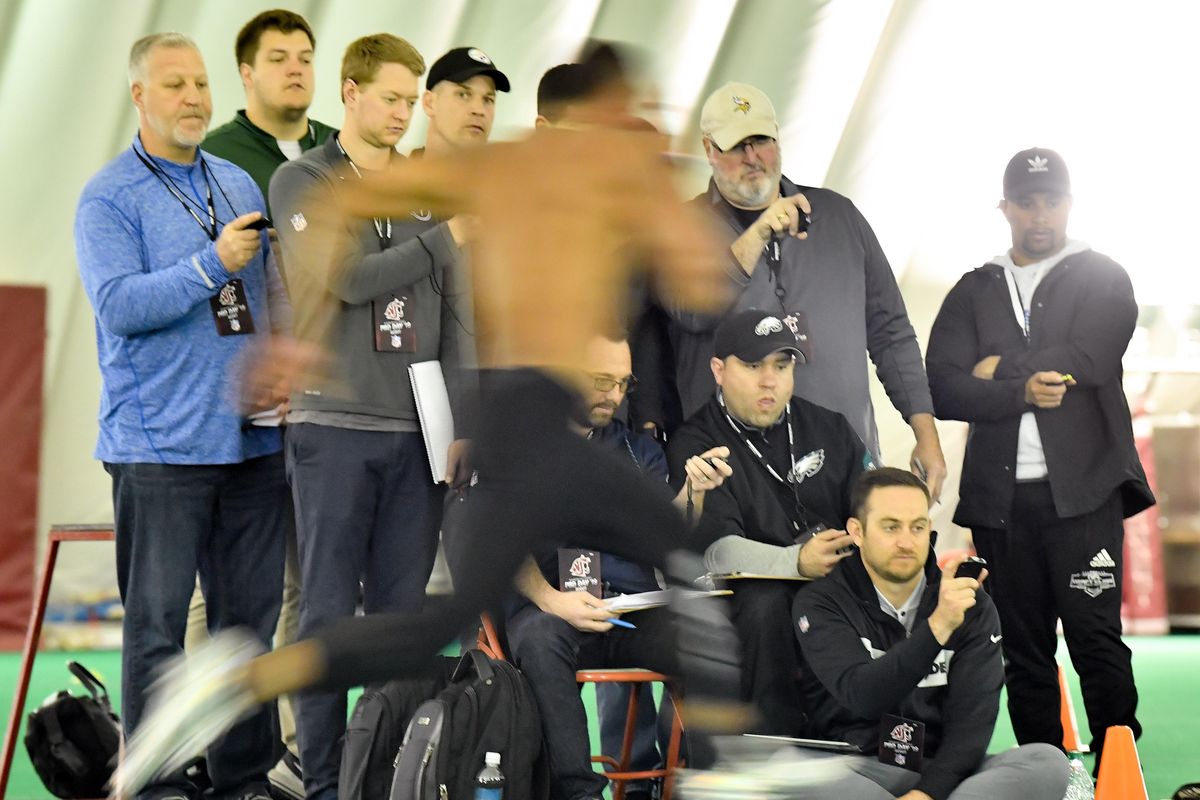 Dillard’s name shot up draft boards after a strong week at the Senior Bowl, and the Woodinville, Washington, native perhaps cemented himself as a first-round choice by posting elite numbers at the combine. He clocked the fourth-fastest 40-yard dash time in Indianapolis and was first in the broad jump and 20-yard shuttle.

Asked if he’d been scanning the mock boards and draft projections with his name, Dillard shot back with a decisive “no.”

“I can’t look at those,” he said. “Opinions don’t really matter, with all due respect, unless you’re coaching.”

Throwing in a setting that was more comfortable and familiar than the one he was in at the Senior Bowl and scouting combine, Minshew delivered 46 passes and completed approximately 90 percent, barely missing a few of his targets on downfield throws – a few of which were dropped.

Minshew averaged 50 attempts per game his lone season in Mike Leach’s Air Raid, so the volume was nothing new. Neither were the receivers. WSU’s Robert Lewis, Kyle Sweet, Keith Harrington and Williams all caught passes from Minshew, as did EWU’s Webster and former Cougar running back Jamal Morrow.

One of Minshew’s misfires came on a vertical route to Lewis. Another deep toss fell through Webster’s hands. But the Pac-12 Offensive Player of the Year connected on every one of his short throws, and only a couple of his intermediate looks were off-target.

“I thought it was good,” Minshew said. “It definitely can be better. You always feel like that no matter how well you do, but we did good things. I think our running backs, receivers definitely helped themselves. I think I helped myself, so all in all I think it was a good day.”

Minshew, who’s been working out with QB coach Ken Mastrole in Boca Raton, Florida, said he and a group of receivers went through a similar throwing routine on Sunday, completing 60 of 60 attempts.

“I’m kind of working on everything right now, trying to be the best I can be,” Minshew said. “Felt all right with how I threw the deep ball today, our guys were a little tired and that’s just how this thing goes.”

The Brandon, Mississippi, native has met with all 32 NFL teams between the Senior Bowl, combine and pro day.

“I was able to shut it down for a bit,” Minshew said. “After the combine, you really don’t want to talk to anybody for, like, a couple days, because you’re just worn out. But it’s good, it’s all a great experience.”

A wounded shoulder precluded Williams from getting on the bench-press rack at Lucas Oil Stadium last month, but the running back made amends with 15 repetitions in front of WSU teammates encouraging him each time the barbell went up.

Of the 26 running backs who performed the bench press at the combine, 22 had at least 15 reps, but Williams said he still outperformed his own expectations and seemed more than satisfied with the result.

“I felt amazing,” Williams said. “I was shocked I got that 15th one. But my shoulder, before Indianapolis, I had a little shoulder soreness so I couldn’t really lift nothing, and I wasn’t about to go and try to lift and get five, and they record it on me, and I was look like I was weak.

“But when I got here, everything felt amazing. I took my time and I got higher than I thought I was going to get.”

The running back also redid the vertical jump, posting a leap of 35 inches, and had a broad jump of 118 inches.

“I felt good on everything,” Williams said. “The only thing I felt I could’ve did way better on was my vert, but I did better than that in Indianapolis, so hopefully they just get that.”

Williams said he’s had official meetings with the Saints and the Bills: “I hooked up with them last night and this morning.”

He would’ve been gracious for an invite to the scouting combine, but Peyton Pelluer didn’t dwell on the fact that three WSU teammates made the trip without him.

Pelluer may have been the next Cougar in line to go to Indianapolis and Washington running back Myles Gaskin vouched for the WSU linebacker when asked, ‘Who is the one guy from the Pac-12 Conference that not enough people are talking about at the combine?’

“Peyton Pelluer from Washington State,” said Gaskin, according to The Seattle Times. “He is a football guy. He knows how to play football. He is always there. I mean, just, like, he’s a football dude. I think that’s a big thing. A lot of people talk about athleticism and stuff. I think he’s a real football player.”

There was no Senior Bowl or scouting combine for Pelluer, but the linebacker who played more games in a Cougar uniform than anyone in school history made good use of the only 3 hours he had in front of NFL scouts.

Pelluer put up the 225-pound barbell 24 times, matching Dillard’s total at the combine, and logged a vertical jump of 28 1/2 inches. His broad jump came in at 11 inches.

Those were all good numbers for Pelluer, who actually pointed out why it may have been advantageous to skip out on the combine.

“I honestly did not really care,” Pelluer said. “It would’ve been a cool experience and I needed time to get better at everything, so I’m glad we had this late pro day, and I think we made the most of it.”

Pelluer planned to stay in Pullman for another week before traveling back to the Seattle area to resume training at Ford Sports Performance. He’ll also participate in the Seattle Seahawks’ Local Day on April 15.

“A lot of scouts (are) saying they like the way I play, and I’ve got the film,” he said. “It was just a matter of me validating it with my drills, whether it’s the position drills or running fast and jumping high. So I feel like the feedback I got was good in that regard.”

One day, he was practicing with the Alliance of American Football’s San Antonio Commanders. The next, Robert Taylor was back at pro day, watching a cast of former teammates participate but unable to do so himself.

Struggling to stay financially viable, the AAF suspended operations on Tuesday – news Taylor learned about in the middle of a skeleton drill during the Commanders’ afternoon practice. The club’s general manager informed the team of the news, then sent players to their lockers to pack up their things.

“We just had to go about our day,” said Taylor, who booked a flight to Pullman, optimistic he could rebound less than 24 hours later and work out at pro day.

Taylor expected to be released from his AAF contract by Wednesday morning, but that hadn’t happened, denying him the opportunity to partake in pro day drills.

“Unfortunately, that wasn’t the case,” Taylor said. “The contracts were supposed to be voided yesterday with the suspension of the league. I don’t know, I’m hoping soon so I can go work out for a team if a team wants to work me out.”