For more information and to see itineraries and prices visit cubaunbound.com/

They navigate the tight pathways made by these saline-loving trees, admiring long-legged flamingos and pelicans, alongside the nearly 300 other bird species found in this area.

The Americans are here with ROW Adventures, a Coeur d’ Alene-based outdoor adventure company, on a seven-day kayaking trip. It’s a trip that weaves culture, music, art, history, politics and, yes, kayaking into one itinerary.

“This is what Florida looked like before the hotels,” said John Hernandez, an American ROW guide on the March 12 trip.

A guest on the trip points to the horizon, noting the lack of high-rise hotels. It’s true. The area we’re in is Las Salinas, part of the larger Zapata National Park, one of 14 national parks throughout Cuba.

Much of Las Salinas is a series of interconnected salt-water lagoons, with an average depth of 1 foot. Red mangrove trees thrive in this salty marsh. Their long roots sink into the sand below the brackish water, anchoring the trees from rising tides while simultaneously holding the soil steady and providing a home to fish, birds and bugs.

The paddle is the third day of the seven-day trip for the Americans who first landed in Havana, Cuba’s capital, and then made their way southeast to the park, near the Bay of Pigs.

For many, it represents a grand adventure. In addition to seeing the natural flora and fauna of the Caribbean Island, they learn about the often-tumultuous and interconnected history of Cuba and the United States. They’re visiting a place most Americans know only through brief mentions in high school history textbooks and one-dimensional discussions on cable television.

Which is why, even on this placid day, the 2020 U.S. elections are closer than you’d think. 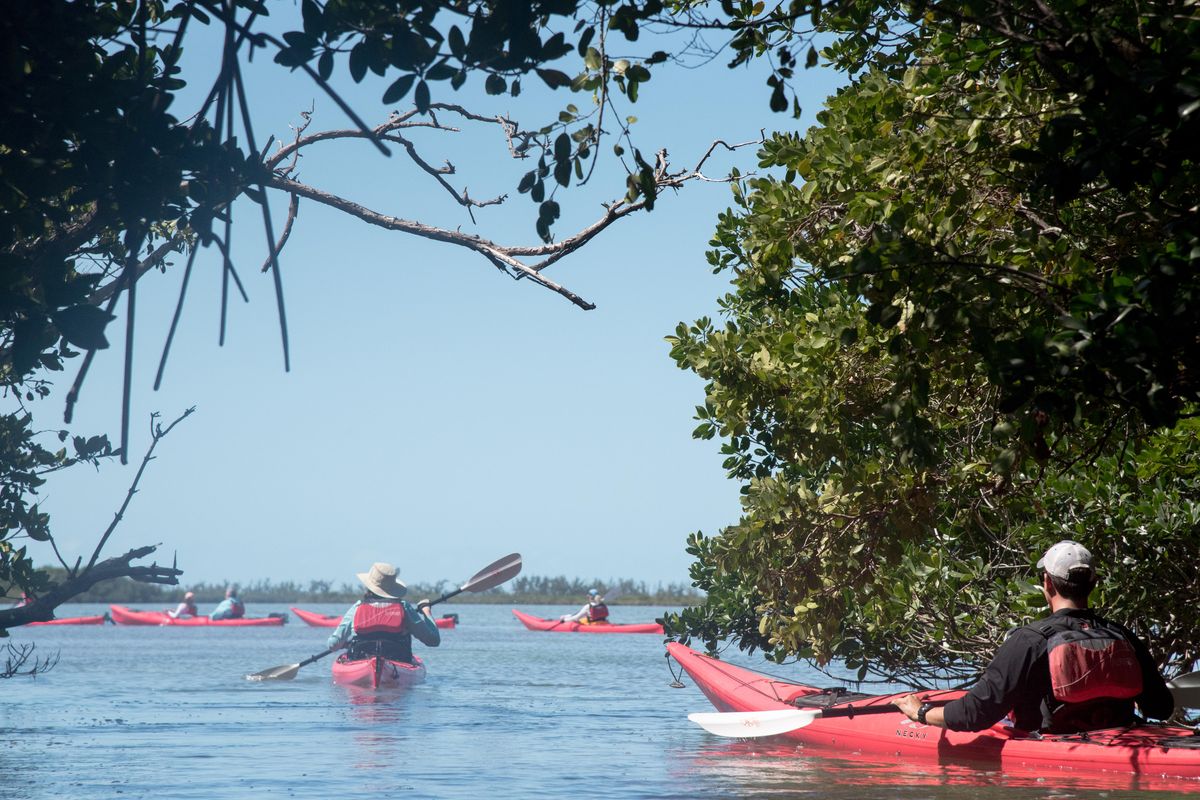 Kayakers with ROW Adventures exit a red mangrove grove in Las Salinas, a national park in Cuba, one of 14 national parks in the small island nation. (Eli Francovich / The Spokesman-Review)

In 2017, President Donald Trump gave a speech and Peter Grubb found himself and the company he’s built in Coeur d’Alene swept up in presidential politicking.

“Oh, it wiped us out,” Grubb said in January. “The summer after that speech the phones didn’t ring.”

Grubb estimated ROW lost half of its Cuba business.

In truth, the speech produced little changes and traveling to Cuba remained easy and legal for Americans, especially when going through a company like ROW.

Over 40 years, Grubb and his wife Betsy have built an international travel adventure company, ROW Adventures. What started as a white-water kayaking service in Idaho now takes guests around the world.

While eating lunch at the White House, a Greek restaurant in Post Falls, on a cold and cloudy January day, Grubb points to photos on the wall he took while traveling in Greece in the 1980s and ’90s – a visual testament to the reach of this Idaho-based company.

It only made sense that ROW started running trips in Cuba after Obama eased travel and trade restrictions on the island nation in 2015.

Cuba, with its pristine coral reefs, azul waters, and extensive mountains and parks offers an exotic and close destination for Americans looking for an adventure.

Unlike other places, it isn’t overrun by tourists, Grubb said.

In part because of the decadeslong trade embargo and in part because of a conscious decision by Cuban leaders like Fidel Castro, Cuba doesn’t have a massive tourism industry like some of its neighbors, such as Puerto Rico. For decades, it was all but impossible to visit the country simply as a tourist.

That changed in the 1990s after the fall of the Soviet Union. With its main trade partner gone, Cuba’s economy tanked. Castro eased some travel and trade restrictions, allowed more foreign businesses to build in Cuba and recruited tourism dollars in an effort to bolster the country’s sputtering economy.

A spree of building occurred, mostly from European investors. The northern coast, west of Havana, was ground zero for beach resort development in the mold of Puerto Rico and other Caribbean beach destinations.

This kind of tourism exists elsewhere in the country. In Playa Larga, the largest town on the Bay of Pigs, there are several resorts with a distinctly Russian ascetic and fading grandeur. Farther east along the southern coasts near the city of Trinidad, a new resort financed by a Spanish company was half built in March.

But resort-tourism has mostly been geographically contained. Combined with the history of economic and cultural isolation, vast areas are relatively tourist-free.

“The numbers in Cuba are still minimal,” Grubb said.

But numbers are growing.

In 2018, a record 4.8 million tourists visited Cuba, a 60% jump in tourism over the past five years, according to Travel Weekly. Grubb said the vast majority of those visitors are heading to the beach resorts or coming via cruise ship.

“The people who are actually getting out and exploring, you’re talking about a couple hundred thousand,” he said. “It’s not very many.”

That means the kind of tourism ROW promotes, and the money it brings, can make a huge difference to ordinary Cubans making an average of $20 a month.

Some of the money the nine Americans paid to go sea kayaking in March will go to the national parks.

“Generally speaking, the parks are interested in economic development in the sense of eco-tourism or green tourism because they have horrible budgets,” Grubb said.

That made last week’s news that Trump plans to impose further restrictions on Cuba all the harder to stomach for Grubb.

On April 17, the Trump administration announced new restrictions on Cuba in addition to Nicaragua and Venezuela. The biggest policy change was allowing U.S. citizens and companies to sue Cuban companies and other foreign companies over the seizure of private property during the 1959 revolution.

The U.S. also placed a cap on the amount of money Cubans living the U.S. can send their relatives in Cuba.

The speech, given by national security adviser John Bolton, was delivered near Miami, the geographic and cultural center of the Cuban exodus. The crackdowns were seen by many as a political move aimed at gathering support from Cuban-American voters in advance of the 2020 presidential elections.

During the speech, Bolton also mentioned new restrictions on travel aimed at steering “Americans’ dollars away form the Cuban regime.”

What those restrictions are or will be isn’t clear. Much like the 2017 announcement, it spreads confusion and doubt and gives the perception that travel to Cuba is not allowed.

As of now, travel is still legal and easy, Grubb said.

“In the end it’s possible nothing will change,” he said in an email. “I think that is highly likely.”

Not judging a book by its cover

There is a seeming disconnect between the rhetoric deployed by Bolton – he called the three countries the “troika of tyranny” – and the tranquil and pleasant experience the American tourists have in March.

Following a long day paddling in the sun, the nine Americans return to their casa particular, a gorgeous freshly painted home a stone’s throw from the beach.

They rest for several hours and then meet at the rooftop bar to listen to a presentation from Frank Medina, the director of the Zapata National Park.

Medina tells the assembled Americans, some of whom are already starting to turn pink from a full day in the beating sun, about the park’s ecology. About the iguanas, which are unique to Cuba, or the birds that travel there each winter from the U.S.

The two are starting to interbreed, creating a Cuban-American hybrid, Medina said.

John Hernandez, the ROW employee on the trip, has been coming to Cuba since ROW started running trips there. In that time, he’s seen tourism increase, despite the rhetoric. He encourages everyone to judge for themselves this tiny island nation.

“People (need to) go out and see for themselves and not just believe what they hear,” Hernandez said. “That country is the epitome of not judging a book by its cover.”