Demolition of the former YWCA building on the Spokane River’s north bank has been given the go ahead, following a recent decision by the Spokane Historic Landmarks Commission.

Removal of the complex – a collection including what remains of a 127-year-old brewery and YWCA structures 1965 – was in doubt after a hold was placed on the demolition permit on Dec. 3 by the city’s historic preservation office.

The site is slated for a major development by Spokane developer Larry Stone, whose $60 million project, called The Falls, will feature two, 13-story towers with hotel rooms, apartments, condos, office and retail space and underground parking. Stone purchased the property through his company, Falls LLC, in November 2010 for $3.2 million.

Wes Southwick, project manager for The Falls development, said the company was looking forward to start construction sometime this year, and anticipated completion in about two years.

“We’re excited to get the project started,” he siad. “We’re demoing because we are getting closer.”

Megan Duvall, the city’s historic preservation officer, said she placed the hold because of the building’s place in Spokane history, potentially making them eligible for preservation.

“The buildings were eligible for their relation to the broad patterns of history in Spokane,” Duvall said. “It’s just part of the process and we have to go through it. It’s part of the city laws.” 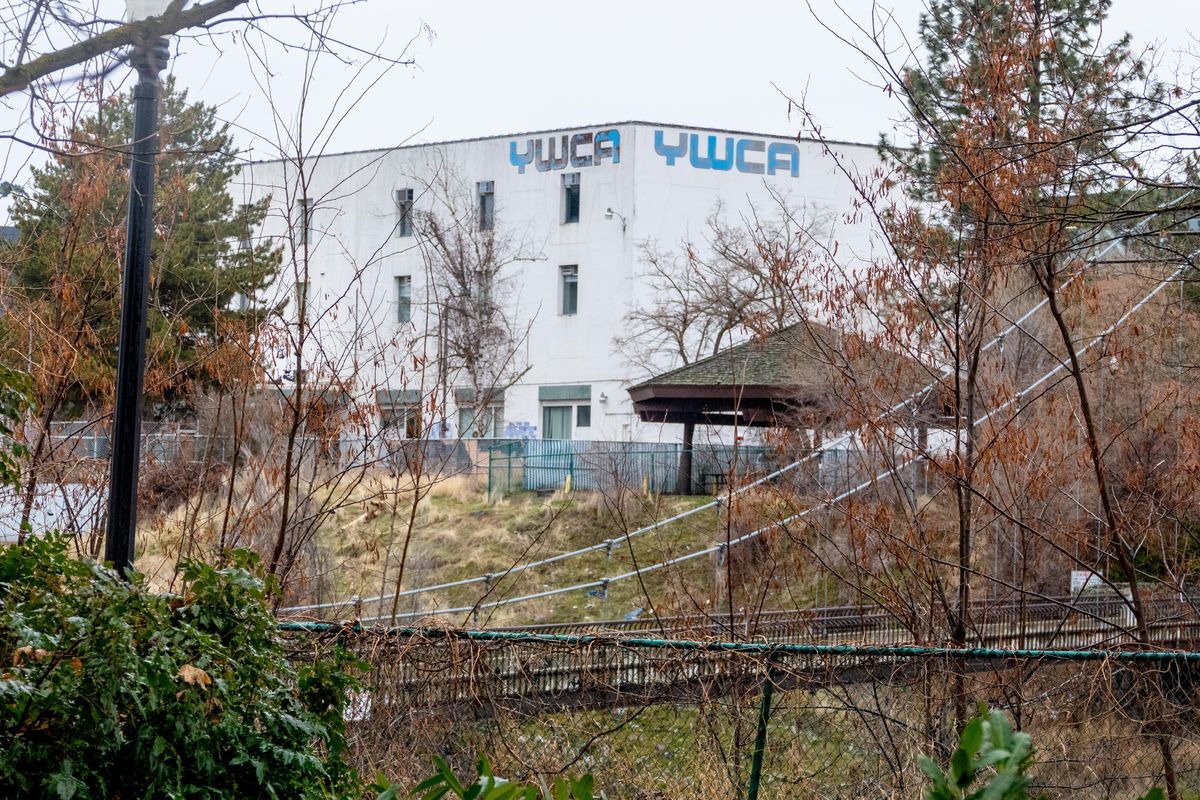 The former YWCA complex of buildings at the corner of Broadway Ave. and Lincoln St., perched on the north bank of the Spokane River, has been empty since the YWCA co-located with the new YMCA in 2009. The complex includes some buildings leftover from the large brewery that once sat there. (Jesse Tinsley / The Spokesman-Review)

At their Dec. 19 meeting, members of the landmarks commission agreed with Duvall, and took the buildings’ eligibility a step further, noting that the the brewery and YWCA buildings were historically significant not just in relation to Spokane’s history, but due to their unique architecture, which they said represented the “Brutalism style.”

For her part, Duvall said the buildings were “a midcentury remodel from 1891.”

At the same meeting, the commission voted on whether it should lift the demolition hold, which it did, with a few stipulations.

The commission wanted more extensive photography of the interior and exterior before the building is demolished, salvaging of any important historic items still in the building, $2,500 to help research and write a more detailed history of the YWCA’s time in the building, and a promise of some historic interpretation on site when the project is complete.

“They agreed with all the mitigation stuff and we took our hold off the demo permit,” Duvall said. “So there really was no delay.”

Southwick said the outcome was fair.

“We went through all the proper steps with them,” he said. “We’re happy to comply with the mitigation stipulations.”

First constructed in 1891 by the Galland & Burke Malting & Brewing Co. of Spokane, the concrete and steel reinforced brick building sat on the length of an entire city block, stretching from Lincoln Street to Post Street on the southside of Broadway Avenue, according to the historic preservation office. The site faces the historic Wonder Bread building, which is near the end of a $15 million renovation.

Over the next 72 years, the brewery was sold to various beer makers, including Spokane Brewery, Sick’s Brewery and Rainier.

In 1963, the building was sold to the YWCA, and local architect company James & Hicks drew up plans for the renovation. A month after a building permit was issued, a fire “razed most of the original brewery complex,” according to research compiled by Duvall’s office.

Work went on anyway, leading to the construction of the 1965 structure still standing today, if temporarily, and the YWCA remained there until 2010 when it moved into a complex with the YMCA at 930 N. Monroe Street.