A GRIP ON SPORTS • What’s the best part of October? OK, that’s sort of a trick question because for some of us, it’s our birthday month. But besides that, I mean. If you answer anything other than postseason baseball I’m not sure you should be allowed to read this column anymore.

• For years and years – OK, 12 in my lifetime – postseason baseball meant the World Series. Winners of the American and National Leagues would meet in a seven-game series to decide baseball’s champions. It was all over by the middle of October. 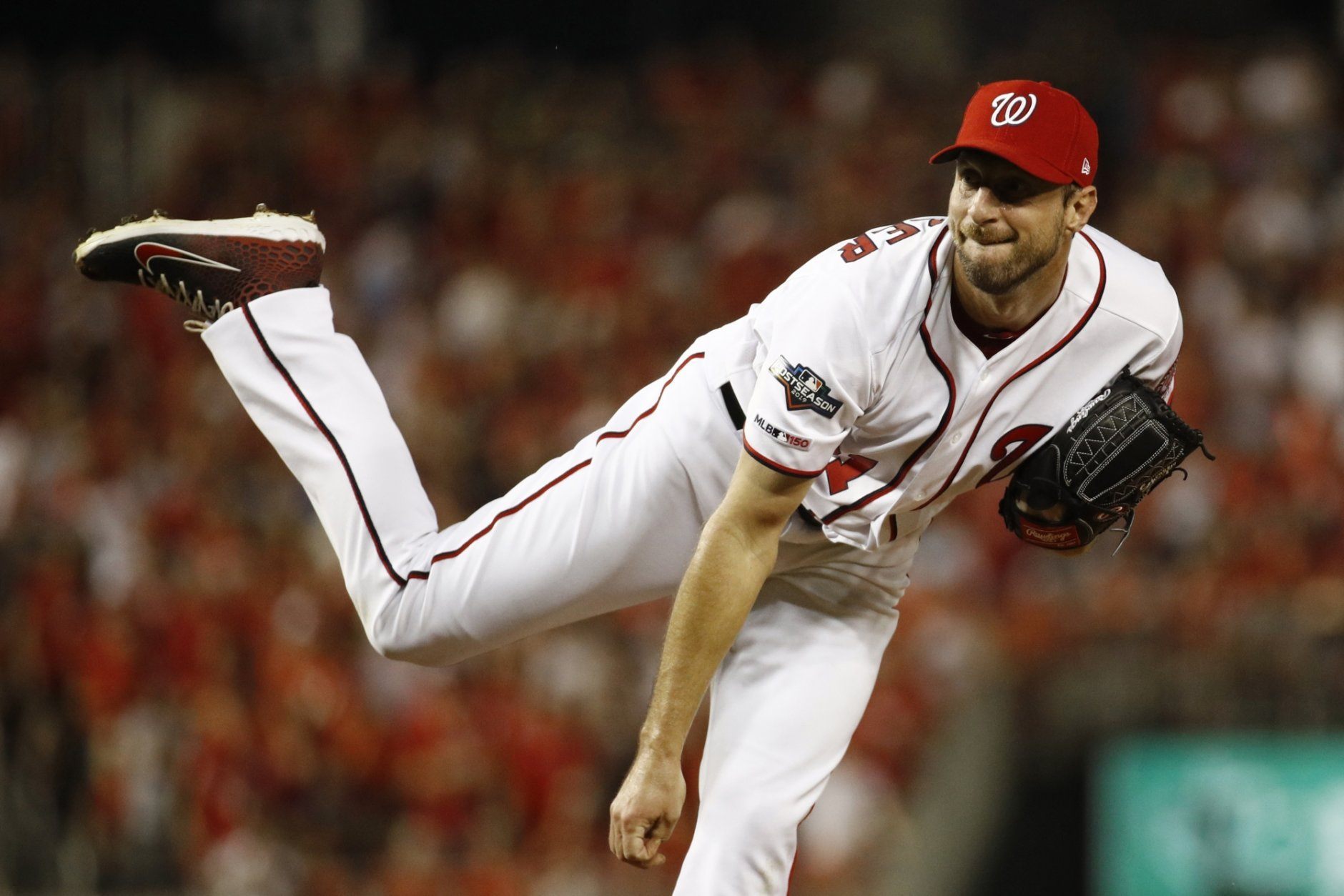 Starting in 1969, a year of upheaval if there ever was one, baseball split into divisions. Maybe it’s why the Miracle Mets performed their miracle. No matter, their success just began a half-century of postseason expansion. A wild-card winner was added in 1995 (actually, 1994, but a strike wiped that postseason off the map) when baseball split each league into three divisions. Then another wild-card team was added in 2012.

All of it leading to games like last night’s.

One game. Winner-take-all. A game seven on the first night.

There was Washington Nationals starter Stephen Strasburg, a Cy Young contender, trotting out of the bullpen in the sixth inning, his team trailing 3-1. See, like a lot of teams in contention for the title, the Nationals don’t trust their bullpen. (It does include, after all, Fernando Rodney, and Mariner fans had enough of the Fernando Rodney Experience to understand.)

One Cy Young-winning starter (Max Scherzer) followed by a Cy Young winner-to-be? What is this, the last game of the season?

Yes it is. For the losing team, which last night happened to be the Milwaukee Brewers. The same will happen tonight to either the Oakland A’s or the Tampa Bay Rays. It’s fun, isn’t it? Except, of course, for the fans of the teams involved. Sitting on the edge of your seat, chewing your nails, nerves jangling, it’s exhilarating, sure, but fun?

I guess that’s in the eye of the beholder.

• I’m also guessing Mariner fans would consider it fun – if it ever happens again. October, 2001. That’s the last time the M’s played a postseason game. Whatever the reasons, the Mariners have been absent from the postseason longer than any other team.

It’s not because the franchise is underfinanced. Not when the American League representatives are the A’s and the Rays. Seattle has comparable resources at its disposal. Tampa spent less than anyone in baseball this season. Oakland ranked 25th out of 30. The M’s? Even in their step-back year, they were 13th in payroll, in the top half of teams mainly because they paid more than $50 million to players no longer on their roster.

Not a lot of bang for their bucks, was it?

We would yell “wait until next year,” but we’ve already been warned that’s not happening. So we will have to be satisfied chanting “2021” over and over.

WSU: The Cougars’ bye week came at good time for baseball fans. But most of the other conference teams are still playing. Theo Lawson picks the winners. Remember, if you bet with Theo, well, you shouldn’t. Not this year. … S-R news columnist Shawn Vestal has his opinion about Mike Leach’s comments after the Utah game and he’s not shy about sharing it. … Elsewhere in the Pac-12, Jon Wilner is going to be taking a look at Larry Scott’s decade in charge. … A jaded WSU fan might ask why a Washington player would want to imitate one of their team’s players. … Oregon believes it will have a couple receivers back soon. … Oregon State wants to get its offense back in synch against UCLA. … The Bruins know the offensive line has to play better. … Colorado knows it will have its hands full with Arizona’s suddenly resurgent offense. The Wildcats have struggled to attract a crowd. … USC is slowly getting healthy at the quarterback position. … California’s quarterback could be out for almost the entire season. … Stanford’s is also out, at least he was last week. … Utah’s Francis Bernard made a lot of plays against the Cougars. … WSU’s opponent next week, Arizona State, also has a bye this one. … In basketball news, UCLA doesn’t have stars. How did that happen?

Gonzaga: Former GU assistant (and Eastern head coach) Ray Giacoletti is back in college coaching. Jim Meehan explains where (and no, we’re not spoiling it). … Larry Weir spoke with Steven Karr, who is a television producer and writes for the Slipper Still Fits, concerning the Zags. It’s part of the latest Press Box pod.

EWU: Football season hasn’t even hit the halfway point yet. The Eagles seemed to have figured out their defensive woes last week, something Ryan Collingwood tries to explain in this notebook. … Ryan also takes a quick look at the Eastern men’s basketball team as it begins practice. … If you haven’t read enough about Cooper Kupp and Eastern’s connection with the L.A. Rams, we have more for you. … Around the Big Sky, Montana has Idaho State coming in this week. There is a reason the Bengals are the homecoming opponent. …  Montana State has an offensive line coach with a story to tell. … UC Davis is trying to bounce back from a debilitating loss.

Chiefs: Ty Smith is back. The star defenseman returned to Spokane after a stint with the New Jersey Devils. Kevin Dudley has more in this story.

Horse racing: Our friend Jim Price has a story today on Jon White, a Spokane native who developed a love of horse racing around Playfair and now works in the industry.

Seahawks: Thursday’s prime-time game with Los Angeles is an opportunity for the Hawks. … At least Seattle’s players are relatively healthy, considering the game is tomorrow night. … Russell Wilson is off to his best start ever.

Mariners: Don’t expect the M’s to win next year.

• Don’t tell my family – they don’t always read this, mainly because they have to listen to me spout the same drivel every day – but for my birthday this year I have decided to do something different. I don’t need anything. So I’m buying each of them a present. It’s a way of saying “thank you” for putting up with me for another year. Who knows? It may catch on. Until later …