What: Orchard Prairie School 125th Reunion Celebration, including sale of prints of a commissioned piece by artist Chris Bovey depicting the schoolhouse. The prints will be available for $20.

On the first day of school at Orchard Prairie, Kirsten Schierman’s kindergartners took turns ringing the bell in the historic 1894 schoolhouse.

For 125 years, the tolling of the bell has signaled the start of the school year. That’s something to commemorate, and on Saturday the folks at Orchard Prairie School are inviting the community to celebrate with them.

“It’s a reunion and a celebration,” said Schierman. 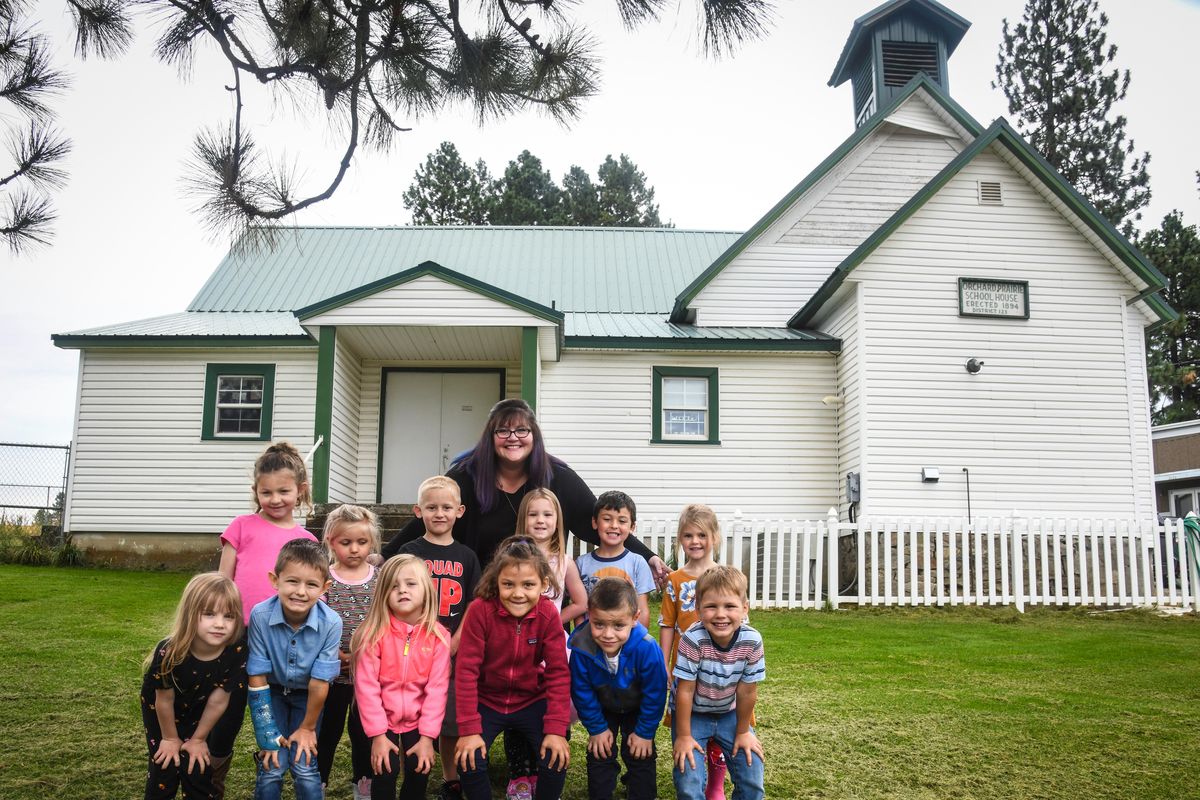 The original schoolhouse is still in use, including an additional room added in 1904. A second building was constructed in the 1970s, and with 72 kindergarten to seventh-grade students enrolled, the rooms are overflowing.

The passage of a two-year levy in February ensured the school’s academic needs will be met.

“Historically, we’ve had great support from the community,” said Orchard Prairie Superintendent Howard King. “We try our best to keep costs down, and I think the community appreciates that.”

Thanks to the levy passage the school was able to purchase a new math curriculum.

Recently several former students gathered with the staff at the schoolhouse to share their Orchard Prairie School memories.

That prompted a story from Janet Isherwood. who’s taught at the school for 36 years.

“A former student told me how they used visiting the outhouse to make homemade ice cream,” she said.

Students brought the ingredients from home and then took turns going to the outhouse to roll the tin can until the ice cream froze.

“It took lots of visits to the outhouse to make ice cream,” Isherwood said, laughing.

The outhouse is long gone, but the rural, family feel of the school remains.

Orchard Prairie School District is just 5 1/2 square miles and features one school and one school bus. Sixty percent of its students are choice students, and there’s a lengthy waiting list to get into the school.

At the beginning of the year, students are divided into family groups featuring a kid from each grade level. The family groups work together on projects throughout the year.

“The big kids take care of the littles,” Schierman said.

Just like they did 59 years ago when Melodie Walch Miner attended the school.

“It was always one big family,” she said. “It still has that family feeling.”

She should know. Not only did Miner attend Orchard Prairie, but her daughters and granddaughters did and do as well.

Miner remembers how students got to ride their horses to school on the last day. Even the chores they had at school proved fun.

“We’d walk up the hill to get the mail,” she recalled. “We used to take our time.”

School board president Don Cutler also has family ties to the school. His father attended the school, as did Cutler and his siblings, and his own kids.

“My brothers and sisters were the band,” he said, smiling. “At the end of the school year we had a cleanup day and built a big bonfire. We roasted hot dogs and marshmallows.”

You might think students attending such a small school would struggle when they transfer to larger middle schools and high schools.

Collins, who has taught at the school for 15 years, said, “They were just a step ahead of everyone else.”

That preparation is intentional.

“If they don’t have to work as hard academically, they have more time to acclimate to the larger school,” Isherwood said.

The family feeling at Orchard Prairie is also because of a close-knit school staff.

“In a school this size, there’s lots of collaboration,” Schierman said.

Several staff members did their student teaching at the school and are still teaching there.

“Once you get here, you don’t leave,” Isherwood said. “It’s great to be part of a small community that’s so supportive and strong.”