To donate to support the Extend the Love initiative, visit https://whaef.org/donations.

Here are the restaurants participating in the food drive through actress Sydney Sweeney's initial $12,000 donation as selected by the Washington Hospitality Association:

The actress and Spokane native has donated $12,000 to fund meals distributed from 12 local restaurants for 12 homeless shelters. The drive, which kicked off Monday, is expected to distribute approximately 400 meals.

Sweeney – whose TV and movie appearances include roles on “Euphoria,” “The Handmaid’s Tale” and “Once Upon A Time … In Hollywood” – said in a recorded statement she was inspired to give back after spending time with her family and “seeing the struggles that Spokane is going through” during the COVID-19 pandemic.

“I hope I’m able to provide a little holiday relief for both the restaurants, who are really struggling right now, and the homeless, who will be facing a really, really tough winter,” Sweeney said. “And even if it’s just a little, I hope that others can find their own way to give back, too.” 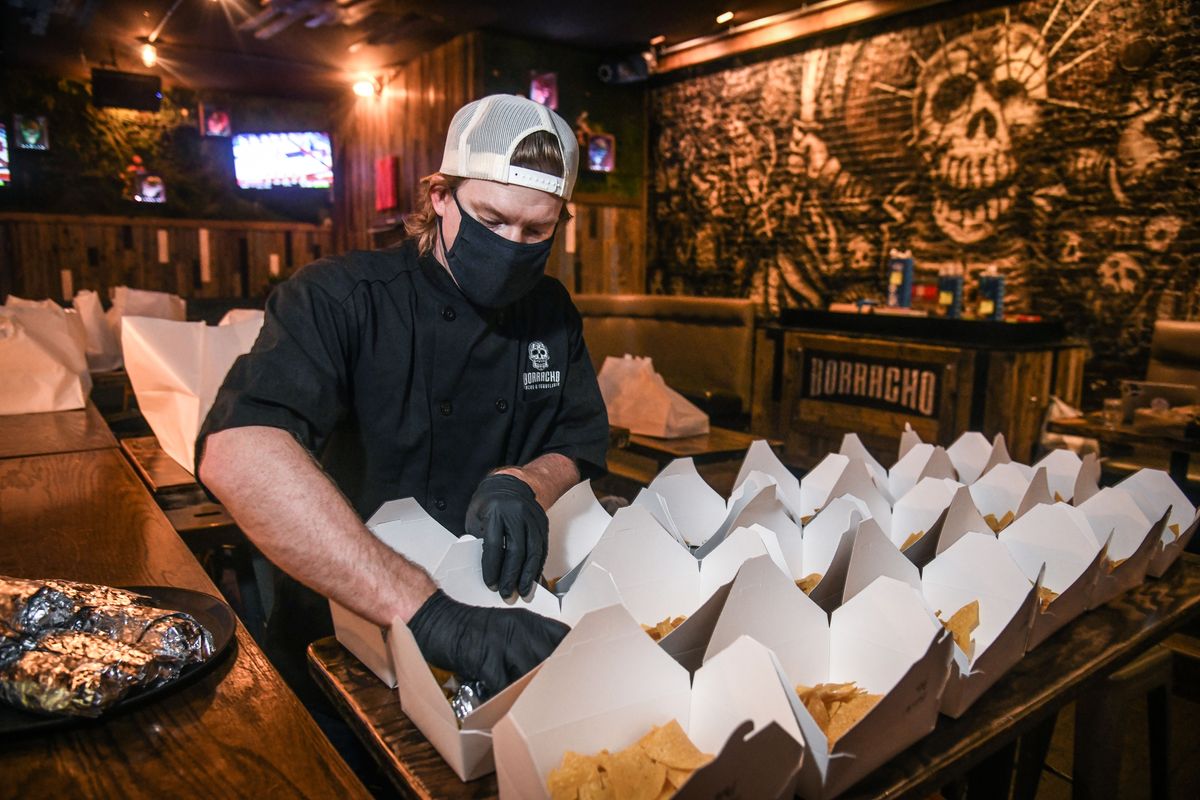 Borracho Tacos & Tequileria manager Garrett Wellsandt, boxes some of the 65 burritos made on Thursday, Dec. 17, 2020, in Spokane. Spokane native Sydney Sweeney has donated $12,000 to distribute meals from 12 area restaurants to 12 area shelters as part of a special 12 Days of Christmas campaign. $1,000 worth of food is going to a shelter per day. This food was headed to the UGM Crisis Shelter for Women & Children. (DAN PELLE/THE SPOKESMAN-REVIEW)

Others, inspired by Sweeney, have found a way.

LifeWise Health Plan of Washington, Washington Trust Bank and Spokane County are each matching Sweeney’s donation, providing a total of $36,000 to extend the initiative into early 2021.

As part of this Extend the Love program, meals will be delivered to the Women and Children’s Free Restaurant and Community Kitchen starting the first week of January. Plans are to carry on through February, although organizers are seeking donations to run the program even longer.

“During this year when the pandemic has forced us to adapt our own restaurant services, we are especially grateful for this opportunity to work with the sponsors, donors, restaurants and organizers of Extend the Love,” Lisa Diffley, executive director for Women and Children’s Free Restaurant, said in a statement.

The effort is similar to the Spokane Quaranteam spearheaded by local activist Rick Clark to collect donations and buy meals at area restaurants to help feed the community.

Cindy Wendle, a contractor with Spokane County who has helped facilitate Sweeney’s donation and Extend the Love, said “the more, the merrier.”

“Restaurants are devastated that they can’t make payroll,” she said. “We hear stories of food insecurity every day.”

The initiatives are driven through a partnership between the City of Spokane, Spokane County, US Foods, Visit Spokane and the Washington Hospitality Association.

Cupid Alexander, the City of Spokane’s director of neighborhoods, said Sweeney initially reached out to brainstorm ideas on how the funds could help local businesses while also providing a hot meal to those in need.

The Washington Hospitality Association selected the participating restaurants. Association President Anthony Anton said the group is keen on spreading the wealth to as many eateries as possible, while proximity to area shelters and donor preferences have also factored into the initial selection process.

“All of them were people who have seen significant downturn in sales,” Anton said, “and hopefully, we can get enough donations to get everybody at least once.”

“To want to engage in this conversation with partners about how to make that happen is probably the best thing I’ve seen in a while,” Alexander said. “To see someone that young do something like this, as a way of investing their dollars in their community, says a lot to me.”

With Extend the Love, Wendle said six restaurants will be chosen each week initially to supply meals to the Women and Children’s Free Restaurant for walk-up or drive-thru distribution.

“We know things are tough and getting tougher every day,” Wendle said. “To have businesses want to step up and do what they can and recognize they want to help support that effort is pretty inspiring.”