Canada lynx are an elusive, lithe cat that thrives in powdery snow at high elevations.

Where other carnivores – coyotes and bobcats, for instance – flounder, lynx excel with snowshoe-like feet and long limbs allowing them to chase their preferred prey, snowshoe hare, through deep snow.

These admirable attributes make the animals difficult to study. In 2016, the Washington Department of Fish and Wildlife estimated that there were about 50 of the animals in the state, but WDFW had done no broad landscape-level survey.

Dan Thornton, an assistant professor in Washington State University’s School of the Environment, moved to the West from Pennsylvania in 2013. One of the first meetings he attended was a lynx working group.

“It became pretty obvious from that there was a lot of concern about lynx status but not a lot of information,” Thornton said.

In 2018, the U.S. Fish and Wildlife Service announced it was drafting a rule to revoke protections for the Canada lynx. The animals have been protected under the Endangered Species Act since 2000. Fish and Wildlife is still considering whether to delist lynx. 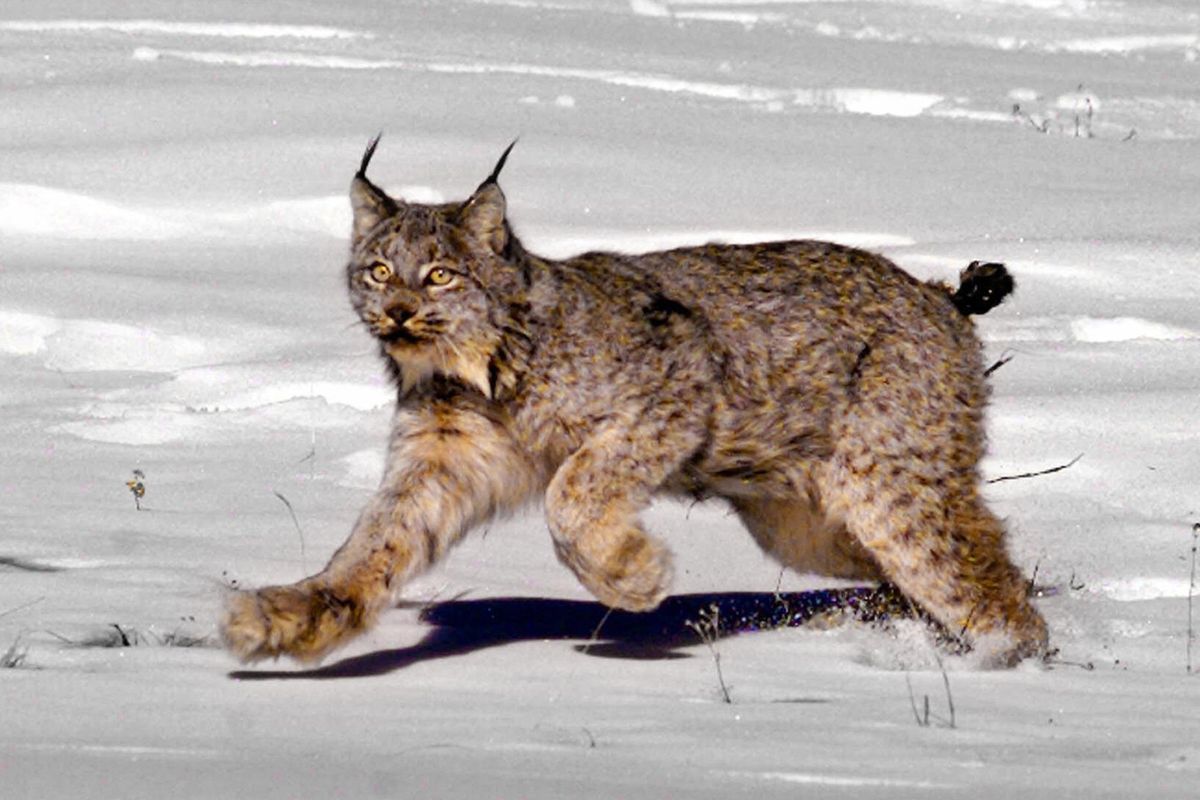 This Feb. 3, 1999 photo shows a female Canada lynx heading for the woods after being released near South Fork, Colo. In control of Congress and soon the White House, Republicans are readying plans to roll back the influence of the Endangered Species Act, one of the government’s most powerful conservation tools, after decades of complaints that it hinders drilling, logging and other activities. (Jack Smith / AP)

All of which got Thornton and graduate student Travis King wondering, where do these felines live?

Thornton, King and others set 650 camera traps in areas of Washington believed to be good lynx habitat. Those cameras took 2 million pictures, which researchers and volunteers combed through.

The findings were not good.

Photos found lynx on only about 20% of their potential habitat in the state. The study, published recently in the Journal of Wildlife Management, covered more than 4,300 square miles in Northeast Washington with camera traps, but detected lynx in only 29 out of 175 monitored areas.

“The occupied area for lynx is really, really restricted,” Thornton said. “Much more so than these large lynx management zones. They are only occupying a small part of that, which I think is concerning.”

Lynx face a number of threats, but perhaps none is bigger than forest fire, said Jeff Lewis, a WDFW midsize carnivore conservation biologist. Lynx-preferred landscapes, in addition to cold and snowy, are high-elevation forests of lodgepole pines, Engelmann spruce and subalpine fir.

In a living situation typical of species that have co-evolved with rarefied survival advantages, the cats’ primary food source, snowshoe hares, live in similar habitat.

Unfortunately, over the past two decades much of that habitat in Washington has burned.

Starting in 1994, the fires started to get bigger and more intense, said Scott Fitkin, a WDFW biologist in the Okanogan District and an author of the WSU paper. He’s worked in that area, which is the only place in Washington where lynx are considered self-sustaining, for 30 years.

“There have been so many fires there they all blend together in my head,” Fitkin said. “When you add it all up, we’ve lost a significant percentage of what we’ve considered good lynx habitat say 20 years ago.”

It’s not that there weren’t fires before, he said, but after decades of fire suppression, the fires in the past 20 years have grown in size and intensity. That wasn’t always the case.

“In general, fire was always a part of this ecosystem and lynx lived with fire,” he said. “And the elevation where lynx occurred, the fires tended to be of moderate size and moderate severity.”

Once burned in a high-intensity fire, forests need at least 20 years before they become quality lynx habitat again, Fitkin said.

At the same time, Washington’s snowpack is changing. Although climate change models predict a reduction in overall snowpack, Fitkin said in many ways the type of snow is of greater concern.

Lynx have an advantage over other carnivores in powdery light snow. Hard-packed snow, or no snow, means other mesopredators, like coyotes or bobcats, are able to hunt in areas once inaccessible.

Unlike fire, Fitkin said wildlife managers don’t have “the quantitative data” on the impact climate change and reduced snowpack is having on lynx populations.

“(It) does seem winters are shorter and not as intense,” he said.

These impacts were all documented in the WSU study. The vast majority of lynx detections were concentrated in the northern Okanogan area, Thornton said.

“You never want to have a species that is clumped together,” he said.

Although WDFW had done other surveys of habitat work, the WSU study was unique in its scope.

“It was a good paper. A really good paper,” Lewis said. “It helped tell the story about lynx in Washington and what they’re up against and the challenges.”

The work may also help managers and researchers predict how a changing climate and more severe forest fires will impact other species, Thornton said.

“Lynx are good sentinel species for climate change,” Thornton said. “They are specialized, have larger ranges and need really cold, snowy environments. So, as they go, they are like an early warning system for what’s going to happen to other climate-sensitive species.”

While all of that is certainly dire, Fitkin and others said there is some hope, however tenuous, for lynx in Washington.

Some of the areas that burned in the 1990s have nearly recovered to suitable lynx habitat, Fitkin said. That could provide the surviving lynx in Washington access to new habitat.

“I’m not writing them off,” he said. “Obviously, if we don’t control emissions and get the worst-case climate modeling, lynx won’t be here.”

Because those habitats are starting to grow back, Lewis advocates for a somewhat counterintuitive approach: suppressing forest fires in the remaining lynx habitat.

He acknowledges that “suppression got us to this point in a lot of ways” but believes protecting the remaining habitat gives previously burned areas a chance to regrow.

“There is a lot of pessimism and I feel it,” Lewis said. “The approach that I’ve been trying to take is there are things we can do that could be helpful for keeping them in Washington. Let’s try and do as many of the ones that make the most sense and are likely to have the most impact now.”