By Chad Sokol and Maggie Quinlan The Spokesman-Review

MALDEN, Washington – In the good old days of the 1950s and ’60s, when the little town of Malden still had a train depot, a school, a bank, a tavern and a dry goods store, Bob Law and his friends looked forward to cold winters and snow-covered streets.

From the highest peak of Pine City-Malden Road, the kids would sled with exhilarating speed toward the train tracks or the auto repair shop. At the end of each ride, they would have a run-in with law enforcement – the town marshal, who was also the school janitor and town maintenance technician.

“And the marshal would be there with chains on his car, and he’d pull us all right back up the hill,” Law recalled with a laugh on Tuesday.

“It was just a great place to grow up,” he said. “Everybody got along.”

Law is now 70 and a member of the Malden Town Council. He’s lived in the community in northern Whitman County since 1956, longer than almost any of the other 200 people who called it home before Monday’s devastating wildfire. 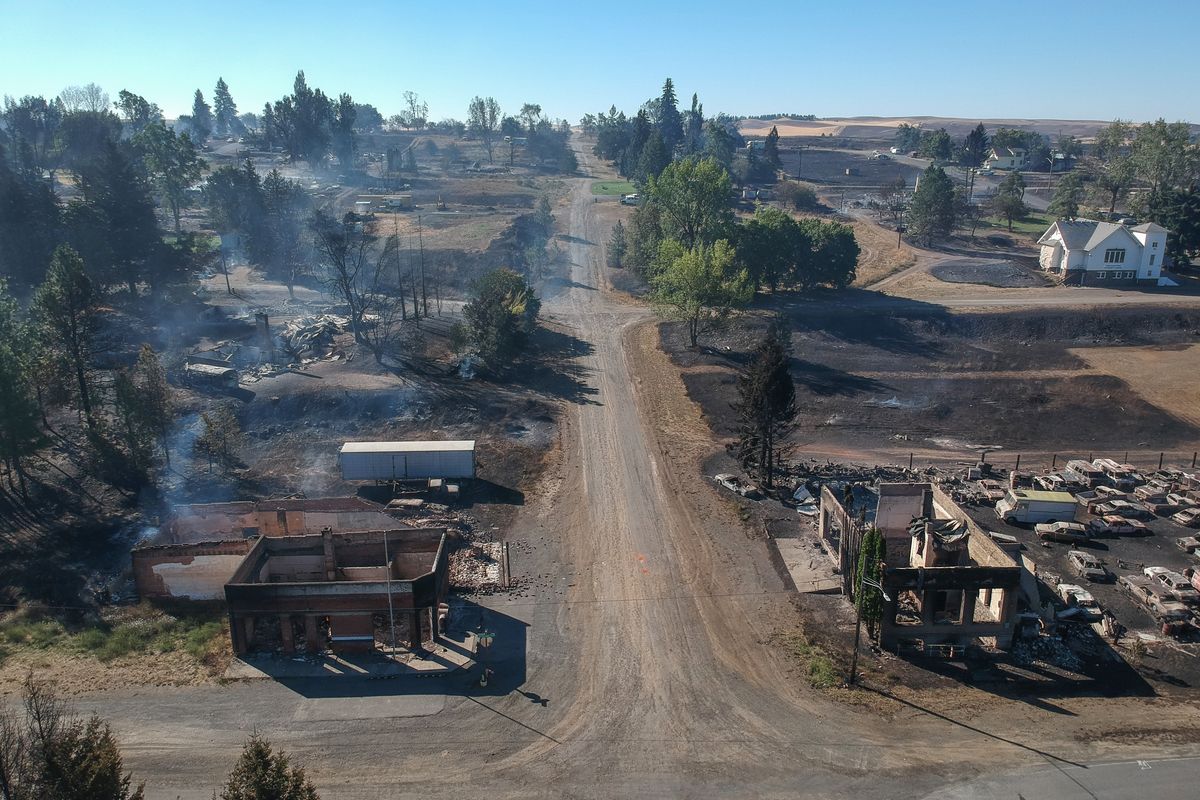 In downtown Malden, Washington, the former post office at lower left and another historic building at lower right still smolder Tuesday, one day after a fast-moving wildfire swept through the tiny town west of Rosalia. (Jesse Tinsley/The Spokesman-Review)

Most homes and buildings in Malden and the neighboring community of Pine City were destroyed when the fire swept over the rolling Palouse hills and raced up narrow canyons Monday afternoon, leaving residents little time to collect their belongings and flee.

What counted as Malden’s downtown landmarks – the post office, the town hall, the fire station – are all gone.

Acrid smoke hung in the air on Tuesday as some residents returned to Malden to survey the damage. Still-standing brick chimneys jutted upward from heaps of rubble where family homes had stood. Power lines sagged across roadways, leaving the whole town without electricity. Sheriff’s deputies blocked roads in and out of town, while the mayor took stock of the situation with insurance claims adjusters.

In Pine City, a few miles southwest of Malden, only a half-dozen homes survived the firestorm. On Tuesday, a massive pile of harvested wheat smoldered beside a grain elevator – a year of hard work in the surrounding fields, up in smoke.

The cause of the fire, which reportedly started along Babb Road in Spokane County, has not been determined, but the flames were pushed to the south by strong, sustained winds until late Monday evening.

St. John remained under Level 2 evacuation orders Tuesday evening, meaning residents should be prepared to leave at a moment’s notice.

Malden and Pine City residents described a frightening, chaotic rush to evacuate as the fire roared into the area.

“Rocks were exploding on the hillside,” said Matt Totten, who was helping a neighbor remove a fallen tree from his property on Tuesday. “That’s how hot it was.”

“It happened so fast,” said Christy Rieck, who lives in Pine City. Her husband, Gil, rushed to Malden to help a friend defend his property before everyone fled.

The Riecks lost their guest house, their detached garage and several vehicles in the fire, but their house was among the few spared from destruction. Gil Rieck said a container of diesel fuel exploded and sprayed a jet of flames onto their property. He believes the greenery around their house prevented the flames from reaching their doorstep.

All around their property were charred pieces of twisted metal, the remnants of neighboring homes and gray smoke still wafting into the air from the pile of wheat.

Jamie Morse, a mechanic, said he and a friend spotted a plume of smoke while working on a combine in a wheat field outside of town. Morse said his friend turned to him and said, “Let’s go see where that fire is. It looks like it’s awful close to your house.”

His friend was right. Morse, his wife and one of their sons live atop a bluff on the north side of Malden, and the fire was creeping toward their home from below. They immediately began corralling their pets.

“We came in here, got the dogs, cats, whatever animals we could. Turned the birds loose. Grabbed whatever vehicles were running,” Morse said. “And then within about 15 minutes, the fire team came after us.”

Their house was spared, though Morse lost several sheds containing equipment and car engines worth tens of thousands of dollars, he said.

“Hopefully everybody bands together and gets through this, but I don’t see it happening,” Morse said. “I’m betting half the people move away – at least.”

Morse, who grew up in the Lincoln County town of Edwall, described Malden as a “typical small town.” But, he said, it’s also become a haven for criminal activity, sowing distrust among neighbors.

“It’s kind of a halfway point for a lot of the drug traffic that comes through,” Morse said. “So, I mean, you have a lot of people that are – ” He stopped mid-sentence.

Law, the town councilman, acknowledged that Malden has seen more crime in recent years, including two homicide cases. But he said he gets angry when people disparage the place where he grew up. He remembers when more than 330 people called it home, when the train depot was demolished in the 1970s and when his mother’s tavern went out of business in 1980.

Nowadays, Malden residents travel to Spokane to do their grocery shopping and send their kids to schools in Rosalia and St. John.

Law said he isn’t surprised to see towns like Malden fade off the map as economic activity is concentrated in larger cities.

“It makes me sad, but I understand it,” he said. “People go where the value is.”

John Lile, a former Malden town councilman who has since relocated, drove around the area on Tuesday to see what was left of his former home.

“Both of my old places burned down,” Lile said. “It got the garage at my sister’s place.”

Jason Hoover and Sage Butler, who are expecting their first child in a month, left town for Spokane on Monday and had been gone only an hour and a half when they learned through Facebook that their house had been destroyed.

The couple could hardly recognize the pile of rubble in a photo from Pullman Radio News, except for their chimney and a cinder block wall.

“You leave your home with no idea that anything is wrong. It was just windy when we left,” Butler said. “An hour and half later, there’s pictures of the town going up in flames, and you see that your house is just gone.”

Butler grew up in that house and inherited it from her father, who died when she was 15. His ashes were there in a wooden urn, along with a folded flag honoring his military service. A car belonging to Hoover’s grandfather was destroyed, too.

Butler’s uncle, who lives across the street, rushed to save the couple’s three dogs and helped a 90-year-old neighbor out of her house before driving away through a wall of flames, Hoover said. The couple’s two cats were still missing Tuesday.

Like many residents of Malden, Hoover and Butler did not have homeowners insurance.

“Insurance companies would nitpick what was wrong. ‘Oh, you have paint chipping, you have moss on the side, you’re doing construction,’ ” Butler said. “That house was built in 1909 and had all the original everything.”

Hoover said the couple had raised a little more than $1,000 through GoFundMe.com, and they plan to spend every penny of it “putting a roof over my baby’s head.”

Editor’s note: This story was changed on Wednesday, Sept. 9, 2020. A previous version erroneously described damage to a church in Malden. The town’s Community Congregational Church was among the few buildings still standing after the fire. The story also misstated which highway bisects the town of St. John.